The Redux library is highly unopinionated. It lets us decide everything from store set-up and its contents to reducers. This is good because it gives us the flexibility to set it up as per the project requirements, but this flexibility is not always needed. We have to figure out the architecture ourselves, which is not an easy task.

I have worked with many different redux patterns and architectures, and I have found that none of the redux patterns are perfectly ideal. The ducks-pattern is prone to a circular dependency. The traditional folder-based approach requires you to separate actions, reducers, selectors, etc into multiple files that become cumbersome while developing and refactoring.

Redux toolkit provides an opinionated wrapper around redux and lets us do more with less code. But, the issue with the Redux toolkit is that the project structure becomes similar to ducks and is prone to a circular dependency. Redux toolkit has already warned us of this issue here.

In this article, I am sharing my approach for the architecture with Redux toolkit, which is circular dependency safe, and also handles refactoring with ease.

Let's start with the important redux components in the architecture. 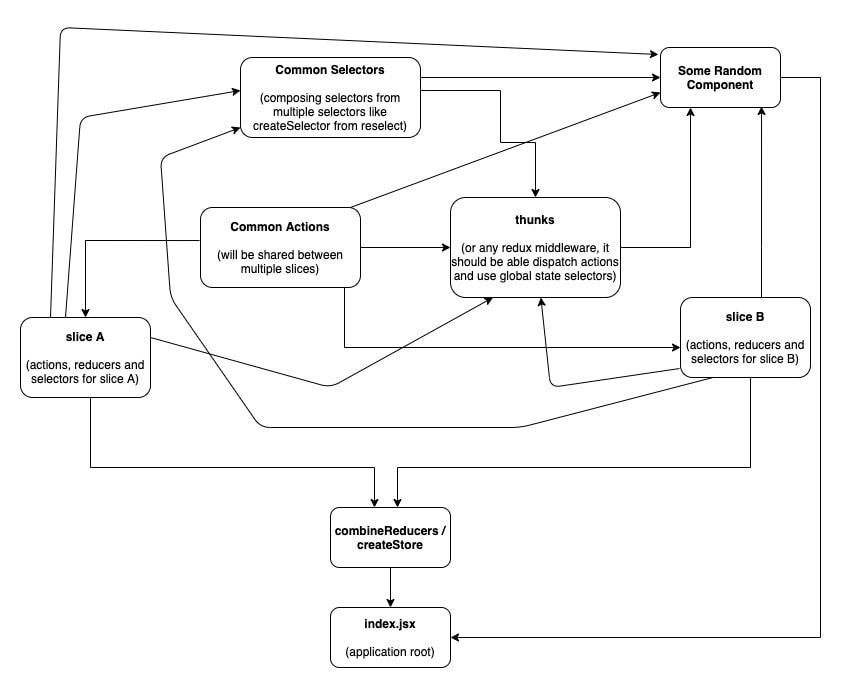 The above example can scale well for large-scale projects. Pro-tip: Never import store directly anywhere except the root component file which passes store data to its child components with Provider. Use redux middlewares (like redux-thunk) when you need to access store data outside your component.

If you are worried about implementing the import rules in a large size project, check out the Dependency cruiser library.

Do share with us your way of creating a modular and scalable redux structure in the comments section.

If you're confused about anything related to this topic or have any questions, you can comment below or reach out to me on Twitter @code_ashish. 🙂