He is a gifted driver. Famed for speed, reverse J, and drifts. He can breeze through the Moscow and Mexico traffic without sweating a drop. Of course, no one gets cracking on Bengaluru roads 😛 But despite being so adept behind the wheels, he sometimes fails to champ the street races. Screeching tyres buzz in his head doesn’t let him sleep at times. I wish to tell him it’s not always about the driver, sometimes it’s the engine. That’s what happens when the right dev talent uses wrong, inefficient, incompatible CI/CD tools. The DevOps technologies you chose can abruptly break or smoothly accelerate your software development cycle. This article explores the Ford & the Ferrari of the CI/CD world in detail, CircleCI vs. GitLab, to help you pick the right one.

Why is CI/CD important?

According to marketsandmarkets, QA automation testing is growing at a whopping 18% CAGR and is estimated to hit USD 28.8 Bn in 2024. The upsurge in the adoption of automation tools further bolsters the belief in CI/CD development approach. Can there be any smoke without a fire?

If you’re new to CI/CD, you must be thinking, “okay! I get the benefits, but how is all this implemented under the hood?”. Basically,

Each stage of CI/CD is critically dependent on robust automation tests. In short, continuous testing is the backbone of the entire CI/CD pipeline. Follow these CI/CD best practices to harvest optimum benefits out of it.

Now having answered what CI/CD pipeline is and highlighting the three obvious benefits of using DevOps tools, let’s briefly list some of the popular open-source and commercial CI/CD tools. Then we jump to the meat of this article, i.e., nose-to-nose comparison of CircleCI vs. GitLab.

What are some of the most popular CI/CD tools?

Jenkins is the jack of all things in CI/CD. It’s server-based & open-sourced. Using Jenkins, you can automate almost the entire SDLC, everything from development & integration to testing, delivery, and deployment.

TeamCity, CircleCI, Bamboo, Codeship, GoCD, GitLab, Semaphore are some other popular CI/CD tools every DevOps engineer can play around with. Some of these are open-sourced, some commercially managed-solutions. Other than these, a DevOps guy would also have following gears up his sleeves. 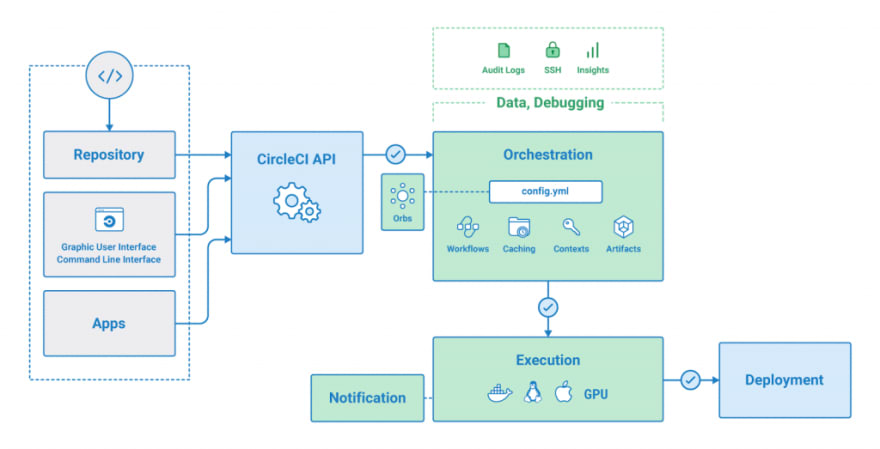 CircleCI, like GitLab, is a modern CI/CD solution. This tool automates the “build, test, deploy workflow of an SDLC.” CircleCI can be used in the cloud as a SaaS tool with an option to run self-hosted runners for better supervising security aspects. Alternatively, you may also consider installing the CircleCI platform on your private server and have 100% control over it.

CircleCI integrates with your code version control system, say GitHub or Bitbucket. Now, every time a developer pushes code to the repository, CircleCI creates a pipeline to process the code and test it against pre-scripted test-cases at various stages.

CircleCI automatically runs this newly committed code in an isolated container or a virtual machine. Suppose the new code fails any predefined tests. In that case, CircleCI can be configured to notify your authorized team-mates so that appropriate action, say debugging, code revision, or code roll-back, can be initiated. And if the committed code successfully passes the pipeline, it gets pushed to your target staging or deployment environment.

What are CircleCI Orbs?

As already discussed, CircleCI can be leveraged to orchestrate CI/CD pipeline either in the CircleCI’s cloud-hosted computes or, you can also implement CI/CD by running CircleCI on your infrastructure. This would give you complete authority to control functionalities and maintenance work.

What is GitLab CI/CD?

GitLab positions itself as a SaaS-based holistic DevSecOps platform. What does that mean? It means it is a web-based git repository that allows you to plan your software and manage the entire development & operations cycle from managing source code to issue tracking, code integration, continuous testing, delivery, and deployment. It attempts to eliminate toolchain complexities involved in agile development methodology. In short, GitLab is a complete ecosystem for DevSecOps. For brevity and fair comparison, let’s limit ourselves to a niche GitLab product, i.e., GitLab CI/CD.

What are GitLab CI/CD and GitLab Runner?

GitLab CI/CD is a UI based web application that manages your projects or builds. It is also accessible through APIs. GitLab Runner processes your builds, i.e., runner applications execute the code in .gitlab-ci.yml configuration file. It runs the script by working in tandem with GitLab CI/CD via an API interface. Runners can run tests in any language across platforms.

Automation saves so much time. What do nerds do with the extra time? We debate which tool is better—just kidding. We channelize the extra time at hand in doing more productive work and growing company revenue. But a DevOps team isn’t a DevOps team if they haven’t discussed which CI/CD tools are better, easy to use, and efficient. CircleCI vs. GitLab is one such hot topic in the automation community. Both CircleCI & GitLab were launched around the same time in 2011. Let’s evaluate their strengths & shortcomings:

What does the StackShare, G2 community have to say?

Do you know G2 awards 4.4 stars to both GitLab & CircleCI? Just like GitHub stars, StackShares stack counts reflect the popularity of technology. CircleCI boasts around 7.4k stacks, while GitLab enjoys 31.1k stacks. Besides, GitLab as well as GitLab CI are open-source technologies and have garnered 22k+ stars on GitHub. Wait, this is not a reflection of how good GitLab is at CI/CD. These numbers reflect overall popularity. CircleCI is primarily “a niche-focused continuous integration tool” while GitLab wears multiple hats, including “version control & code collaborator.”

CircleCI fans on StackShare are gaga about:

A major differentiating factor between the two is:

How this impacts your choice of CI/CD tools?

The main intent behind implementing CI/CD pipelines is optimizing workflows. If your CI/CD tool natively supports the source control hosting service you’re using or external tools you want to integrate, then managing & addressing tickets would be easier and quicker. If you have to wait for days to solve issues, then the automation purpose is diluted. Both the tools provide flexibility in choosing your repository hosting but being an all-in-one solution, GitLab would have the edge over CircleCI as the learning curve gets shorter when you’ve to learn only one tool.

Both CircleCI & GitLab can speed up the CI/CD pipeline processes by executing jobs in parallel. CircleCI workflow achieves this by running each build in an isolated containerized environment. In GitLab, you can configure the YAML file to perform parallel operations based on runner availability.

Distributed job execution means horizontally scaling builds based on stages to multiple machines. CircleCI’s SaaS version distributes by default to several builder machines and is subject to availability, and there might not be any job queue. If you’re using the self-hosted CircleCI version, CircleCI still provides all the tools in-built to manage your clusters. GitLab too supports distributed scaling.

All GitLab plans except the free version have a next business day support system. CircleCI provides premium support for customers who need it, and for others, it provides email-support. For free tier users, community support is available. Cloud CI plan or CircleCI is fully automated and doesn’t need any maintenance service.

GitLab CI is available over the web and can run builds on any platform supporting GO, i.e., Windows, Unix, and macOS. It supports all major scripting and test automation languages, including Java, PHP, Ruby, C, Python. CircleCI is a cross-platform CI/CD solution; it supports Windows, macOS, managed cloud hosting, and you may even self-host on your dedicated infrastructure. Like GitLab, CircleCI supports all popular scripting technologies.

As you would have noticed, I referred to this comparison as Ford Vs. Ferrari. It was for a reason. Both the tools are equally good for streamlining your SDLC and implementing CI/CD for business agility. What is best suited to you is dependent on the tools you wish to integrate them with. LambdaTest cloud Selenium Grid allows easy integration with both CircleCI and GitLab. Evaluate wisely before coming to a decision. Wrong tools can push developer productivity in the valley; the right compatible tools can peak it. For automation testing, the LamdaTest platform has got your back; pick your CI/CD tool, and integrate it with LambdaTest.

Once suspended, codepoetn will not be able to comment or publish posts until their suspension is removed.

Once unsuspended, codepoetn will be able to comment and publish posts again.

Once unpublished, all posts by codepoetn will become hidden and only accessible to themselves.

If codepoetn is not suspended, they can still re-publish their posts from their dashboard.