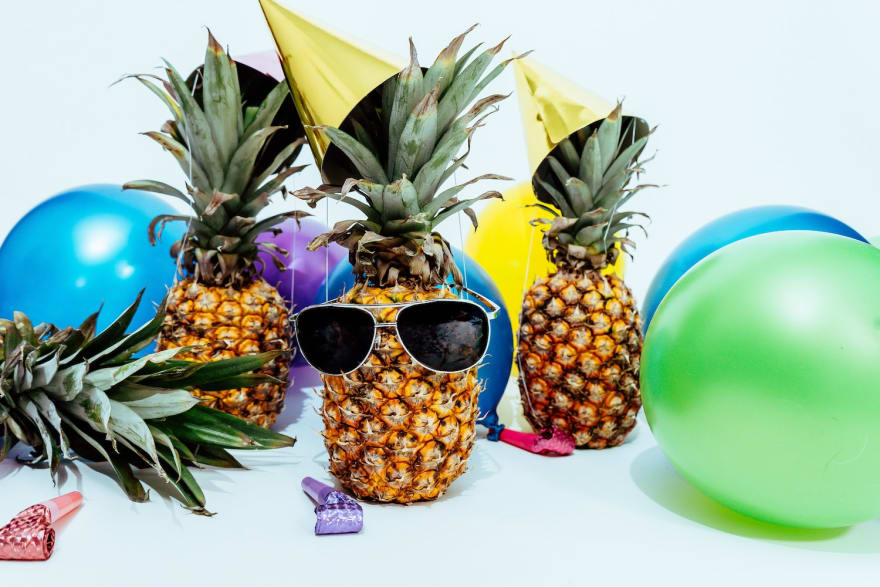 NOTE: This post was written on the 29th of November 2017, all information is correct as of that point.

It's been two months since my first post on Code The Web. Since then, a lot has happened - I will go into it in this article, and give some stats and analysis about how this blog is going and How I’m going to improve.

Oh yeah! I had been chatting to this person on DevChat called @Nythiennzo. We had been talking about programming blogs - something that I had been thinking of for ages. Nythiennzo had just started his blog, and he recommended this course to me - How to Create a Blog That Boosts Your Software Development Career, by this awesome YouTuber called Simple Programmer.

I had signed up for the course, thinking I would see what it was and look at the information later and then quite frankly forgot about it. However, when this email appeared in my inbox, I was reminded of it. And by the end of the email, I was hooked.

The email course sends each Tuesday and Thursday. I was excited for the course, but I wasn’t actually planning on making a blog as the course came until I read the first actual course email. 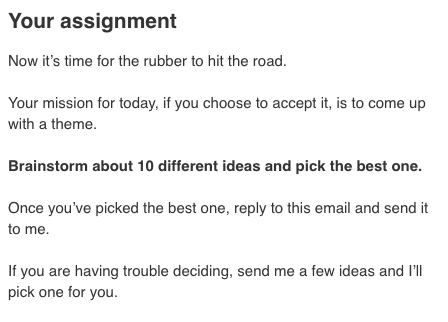 At the end of the first email, John (the guy who made the course) gave me some homework. Well, I mean I had to do it right? 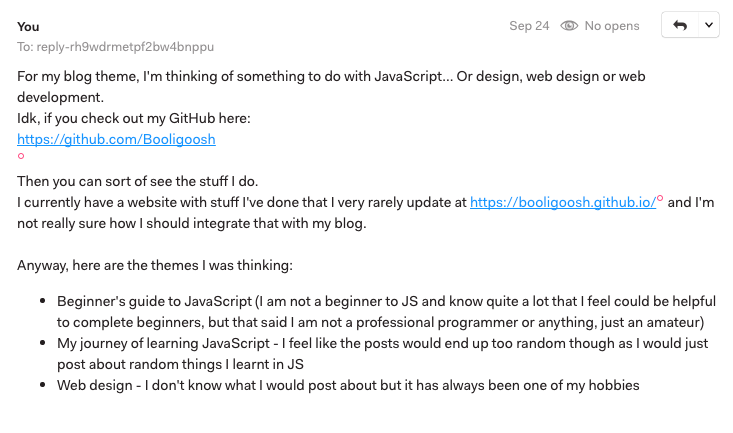 Unfortunately John didn’t reply (which is understandable considering he has so many emails), so I decided to wait. That was all fine, until the next email came along - telling me that this was when I needed to create my actual blog and buy a domain name. But I hadn’t chosen a theme yet, so couldn’t come up with a name, so couldn’t make the website. I had to make a decision, and I went with beginner web development as that’s where I think I can provide the most value.

On the 28th of September, I bought the domain name codetheweb.blog and put up a basic site from a Jekyll template (which I have since made many modifications to). Here is a screenshot of Code The Web from that same day: 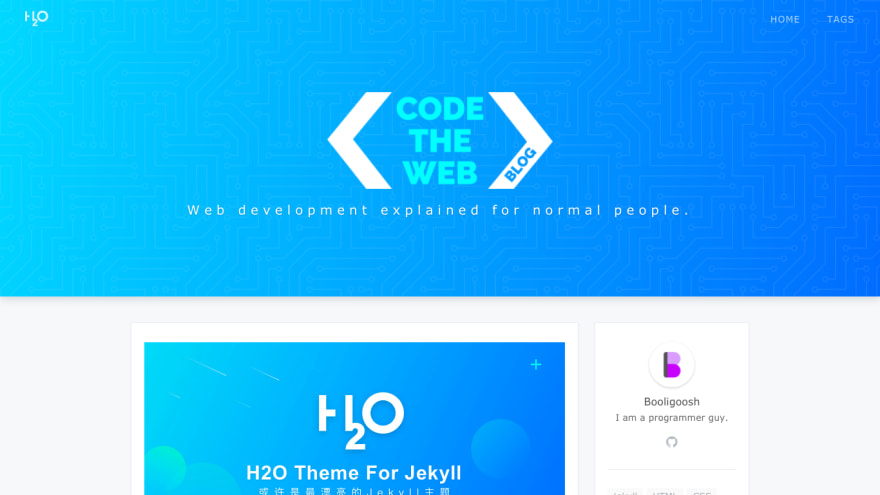 The next day I put up my first blog post, which was exactly two months ago from today!

That’s it for how it all started, if you want to read more of the process then you can check out that first post, where I wrote about it.

In this section, I’m going to give a few stats about how my blog has performed over the last two months, collected from my Google Analytics. 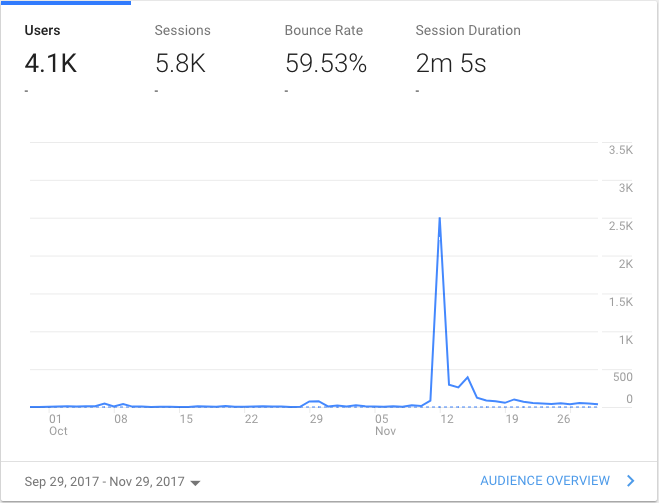 Since starting my blog, I have had 4.1K users and 5.8K sessions. Considering that this is only in the first two months, I am pretty happy.

The problem is, _ over half of those users all came in one day!! _

Initially that might sound like a good thing, but that means that my users other than that one spike in traffic would be a lot less.

Here are the top 20 nationalities of users: 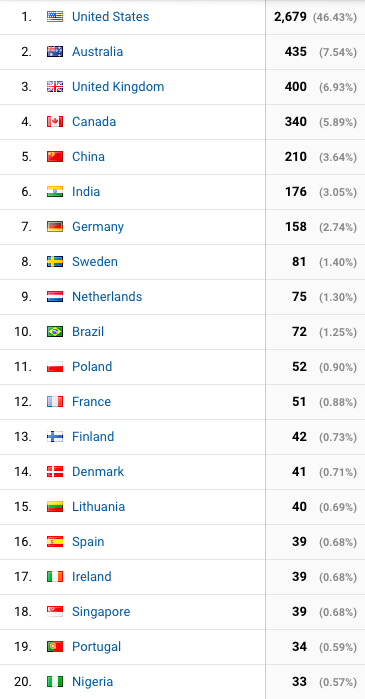 A large portion of my page-views come from America, with Australia as the runner up. I live in Australia, so that probably biases the data, but other than that it is mostly accurate.

Here’s how I gain my users: 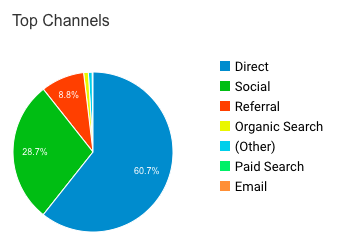 Most of the traffic is direct. This is probably mostly a case of when Google Analytics is not able to determine where the user came from. The social part was almost all from Reddit (96%), I posted Code The Web on there a few weeks ago and got a lot of traffic (that’s where the 2.5K spike came from).

The referral traffic is from lots of different sources including places that embed Reddit content, and most of all this Chinese website that featured me in one of their articles.

I took a look at my most popular pages: 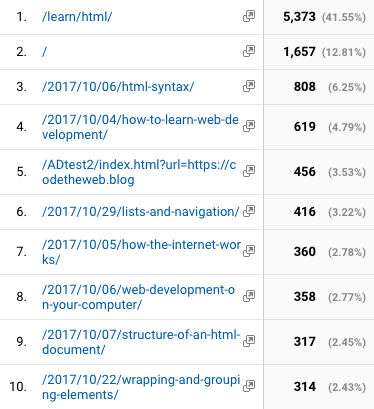 The /learn/html page was obviously the most popular, as that was the page that I linked to in my Reddit post.

In terms of popular articles, my How To Learn Web Development article was the most popular. I think that is because it has a very generalized title, which I should keep in mind when writing future posts.

I’m not really sure about the order of the other articles in the top 10, it seems kinda random (although you can tell me your hypotheses in the comments).

Ok, that’s it for statistics! Tell me what you thought :)

These are the things that I think I did well at:

Here’s what I plan to do from now on:

So, Code The Web is now two months old!

Well okay, technically its’ not a birthday but why waste a chance to celebrate? Actually I suppose it’s like a month-birthday, if that’s a thing 😂

If you liked this post I’d love it if you helped out and shared it with your friends, or joined 50 other awesome people and signed up to the newsletter.

If you found this post boring, don’t worry - It’ll be back to normal next time! This is just me rambling on about my experience starting a blog, which you may or may not have found useful.

See you next time, where I’ll be talking about Advanced background images!

So, What do you think?

I'd love to hear feedback, advice, tips, questions or whatever in the comments below!

The Software Bug That Created a Bomb

Why is Technical Blogging so important?

Once suspended, codetheweb will not be able to comment or publish posts until their suspension is removed.

Once unsuspended, codetheweb will be able to comment and publish posts again.

Once unpublished, all posts by codetheweb will become hidden and only accessible to themselves.

If codetheweb is not suspended, they can still re-publish their posts from their dashboard.

Once unpublished, this post will become invisible to the public and only accessible to Ethan.

Thanks for keeping DEV Community 👩‍💻👨‍💻 safe. Here is what you can do to flag codetheweb:

Unflagging codetheweb will restore default visibility to their posts.