Today is the big day; we finally get to explore the intricate world of programming (kind of). Hopefully, by the end of this blog, our Grandmas will be able to write the first lines of code for their Airbnb app clone.

With the difficult part out of the way; let's cover what language we will be using. We feel most comfortable in Ruby, and we also believe Ruby is relatively easy to read and understand (very similar to English). One thing to mention more or less, every language is the same in terms of basics. The main difference is how it is written. For the programming savvy, the term is 'syntax'. The reason why we have so many languages is they are used for different purposes - each programming language is designed to make certain things easy. Another point is that once one language is learned, other languages can be picked up relatively quickly.

Now, let's get back to the real stuff - coding!

Today we are going to cover two concepts:

One of the first things we learned when we started coding was variables. Variables are an essential part of programming as it allows you to stores values. The best way to explain how a variable works is through the box example. Value(s) can be stored in the box which are then labelled. In this instance the variable name is Grandma, and the stored value is Barbara. 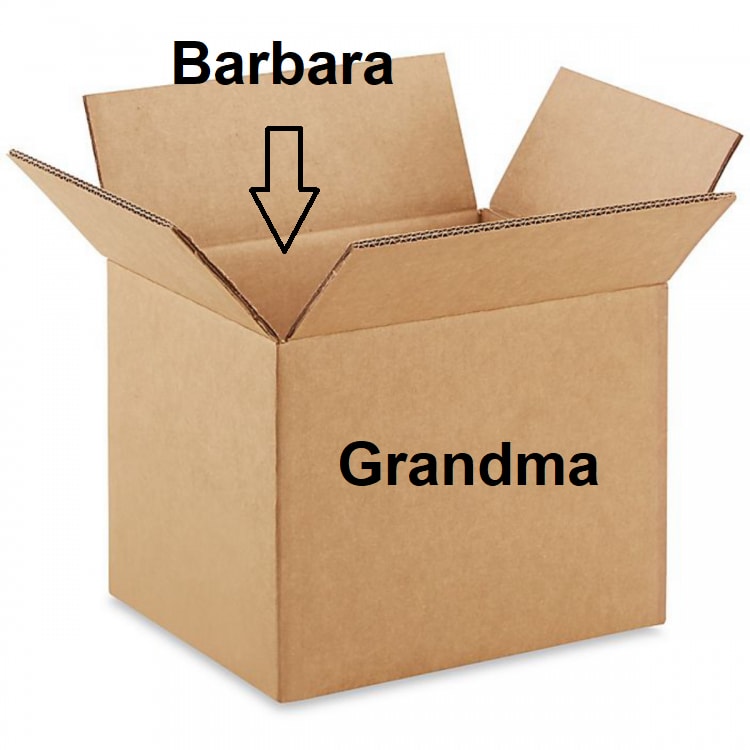 You might ask, what is so great about variables? The answer is very simple, they allow the programmer to store values that can be accessed at a later use.

The creation of a variable works by associating a Ruby object with a variable name this is called a variable assignment.

A string is a text.

The simplest and most common way to create a string is to enclose the object in quotes.

You can do some nifty stuff with strings. For example, you can use concatenation. Which means you can combine various strings into a single string.

The other way of doing (better) is using interpolation

Other interesting stuff that can be done is using Ruby's build in methods.

Once we introduce division, the difference become apparent - integers and floats will produce different results.

The Boolean data type is very straightforward; it has three properties true, false and nil. The main purpose of using true or false is to evaluate a logical statement, to check whether it is true or false.

Lastly, the nil data type is somewhat unique - it represents nothing (yes, you've heard us right). Sometimes you might need to assign a nil value to an object (this will be discussed in the future).

Arrays give the programmer a very useful tool at his or her disposal. It allows to store multiple values in a single variable. The stored values can be any data type from strings to numbers.

Square brackets represent arrays. As mentioned previously, they can store more than one value.

To access the array is done by referring to the index.

In the array above, the first element would be glasses. Counter-intuitively the index starts at 0.

This is how indices work within an array. The counting always starts at 0.

We have decided to dedicate a separate blog to hashes and symbols as they are more complicated data types than what's been covered above.

We've only covered the basics here; in subsequent blogs, we will break down each concept in much greater detail. The reasoning behind this is to keep the posts short and sweet. It can be overwhelming with all the new information, especially with someone like our Grandmas who have no prior experience in coding. The idea is to make each post relatively easy to digest.

In summary, variables allow the programmer to store values (box example). The variables then can be accessed at a later use. Understanding various data types is important as well - if something is unclear, we would advise having another read. If it is still unclear, do not hesitate to get in touch with us. We are happy to help (can't be worse than explaining to our Grandmas).

Once suspended, coding4grandmas will not be able to comment or publish posts until their suspension is removed.

Once unsuspended, coding4grandmas will be able to comment and publish posts again.

Once unpublished, all posts by coding4grandmas will become hidden and only accessible to themselves.

If coding4grandmas is not suspended, they can still re-publish their posts from their dashboard.

Once unpublished, this post will become invisible to the public and only accessible to coding4grandmas.

Thanks for keeping DEV Community 👩‍💻👨‍💻 safe. Here is what you can do to flag coding4grandmas:

Unflagging coding4grandmas will restore default visibility to their posts.