React hooks! The new cool thing in the react eco-system right now! Its been just a year since the concept of react hooks has been introduced. Do you love react hooks or hate them? 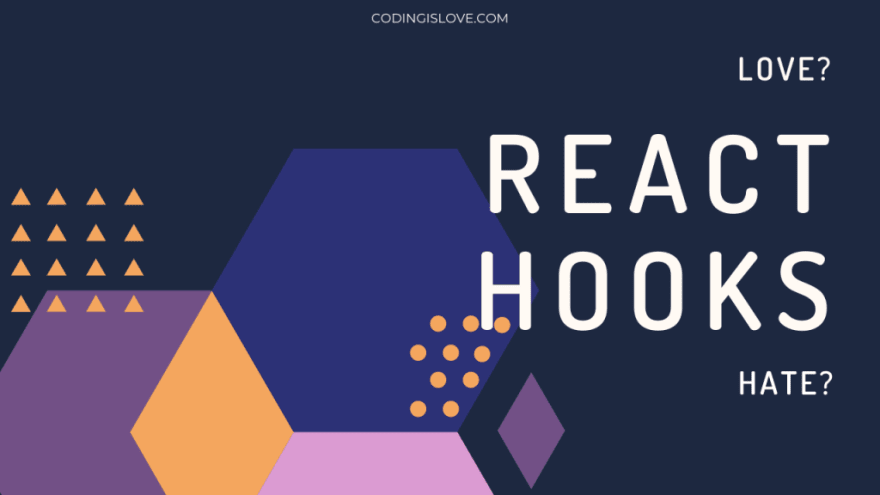 Let me share my experience with react hooks. I hated them in the beginning. Now, I love using them in a few specific scenarios but still hate them in other scenarios. Let’s dive into it!

Over a period of time, This fatigue has decreased and people are leaning towards well maintained and battle-tested technologies based on how useful they are for the current project but not everyone.

I think that most developers are using react hooks in their project just because it’s the new cool thing! They neither see the benefits of hooks nor try to understand the best practices in implementing hooks.

I’ve seen some devs re-writing their entire codebase just to use hooks. You don’t have to do that buddy! You are just wasting your time for nothing. Performance benefits are minimal to hardly noticeable. In addition to that, If you don’t implement hooks in the right way then you’re only making the performance worse!

What’s the first impression that you got while reading react hooks documentation for this first time? Don’t tell me you never read the docs! Some of them never read docs. Only googling randomly 😂

I never re-wrote any of the old projects with hooks. I wouldn’t do that even now. It’s just a waste of time to re-write the entire project using hooks.

Then I got one project around 6 months ago which was written by some other developers. It was only around 4 or 5 months since hooks were released at that time. But they had already adopted it. I thought Okay cool, I get to play with react hooks!

Then I saw the code base!

The code readability with react hooks is terrible if you use them in large components. I want to stress this again :

No matter how good you are with react, Code readability with class components would still be a lot better compared to functional components with hooks

I also saw few mistakes that devs tend to make with hooks. The most imporant mistake is not using useCallback for functions inside a functional component! This is a very bad mistake.

Let’s cut the chase and talk about what I love and hate about hooks.

What I love about hooks

It is very useful in a few cases. Here’s an example – I had to handle the back button of several components manually in a react native project. In this case, it was very helpful using a custom hook.

Here’s the custom hook that i wrote

Now All I have to do is use the custom hook in any component that I want.

It is very convenient and readable in this use case.

The same goes with use cases like adding a custom message listener or internet connection listener.

It is also useful for keeping related logic together. For example: BackHandler.addEventListener and BackHandler.removeEventListener in the above code are related to the same functionality and they are kept in the same place in case of hooks.

So I get it, hooks are useful in few cases and I love using them in such cases. But I still don’t get why do you need to use hooks for your entire project and every component!

What I hate about hooks

As mentioned earlier, Terrible readability! I have to read a functional component with hooks thoroughly for some time to understand what’s going on there!

In case of normal class components, Just one glance and you understand what’s going on in that component.

Stuffing functions with useCallback inside a functional component?

What’s going inside those multiple useEffect blocks without names? Only comments can help

No guidelines for beginners

Beginners tend to make a lot of mistakes with hooks. Specifically not using useCallback, stuffing a lot of function inside one functional component.

React team had introduced an eslint plugin which helps in finding some errors such as exhaustive deps rule etc. but it still doesn’t really help that much.

React team should implement some proper guidelines for hooks so that developers can follow them for the best performance, readability and maintainability.

Writing useCallback for every function? You don’t have to do that for good old class components.

So yea I would use hooks in my project but only for few smaller components. I would stick to class components without any hooks for every other use case. I may be right or wrong. This is just my opinion. Do let me know your thoughts. That would help me learn better

Coding is Love
Coding is Love is an award-winning blog on programming & development with coding tutorials, best practices for developers and walk-through of latest technologies.
Marvel’s Shang-Chi – What if he was a web developer? | Web Multiverse
#webdev #css #humor #javascript
12 commonly used Javascript Array methods that you should know
#codingtutorials #coding #javascript
Rythm.js, A javascript library that makes your page dance | Spotlight of the day series
#spotlightoftheday #css #html #javascript

Once suspended, codingislove will not be able to comment or publish posts until their suspension is removed.

Once unsuspended, codingislove will be able to comment and publish posts again.

Once unpublished, all posts by codingislove will become hidden and only accessible to themselves.

If codingislove is not suspended, they can still re-publish their posts from their dashboard.

Once unpublished, this post will become invisible to the public and only accessible to Coding is Love.

Thanks for keeping DEV Community 👩‍💻👨‍💻 safe. Here is what you can do to flag codingislove:

Unflagging codingislove will restore default visibility to their posts.