When you dive into learning a new programming language, there are some standard concepts that tend to be very helpful. One of those is a data structure representing a list of key value pairs, where each key maps to one and only one value. However the value itself could be another data structure containing many values. This blog post will break down maps in Ruby and Javascript and how to use it in each.

Here is an example of declaring and initializing a Ruby has using strings as keys.

and BTW people like to call => a "hash rocket".

In Ruby if the keys are symbols (which are faster than using strings as keys) then you can use this JSON-style format.

Let's say that Alex attends another meeting and you wish to increment alex's value in the hash.

Let's say that everyone attends another meeting and you wish to increment their values. We can use the Hash classes each method, which takes in two params a key identifier and a value identifier.

For this purpose we only need the key, so instead we can use the each_key method for Hash and do the following.

A Ruby Hash is not the same thing as hashing or using a hash function. Most programming languages call an ordered key value pair data structure a "map" because it maps a key to a value.

On the other hand, hashing is the concept of using a function to produce an integer from an object. Here is how Java oracle handles hashing:

Whenever it is invoked on the same object more than once during an execution of a Java application, the hashCode method must consistently return the same integer.

If two objects are equal according to the equals(Object) method, then calling the hashCode method on each of the two objects must produce the same integer result.

This is useful because you can create what is called a "hash table" to store data. If you write a good enough hashing function for the data set that you wish to store, then each object will get hashed to its own "bucket". Your hash table will start out with a bunch of empty spots in it (null), and after populating it there will still be many nulls, but since a hash table is essentially an array where each index is the hashcode (the integer returned by the hash function) and the element at each index is the data element then this means you can access data in array runtime i.e. constant run time as opposed to a logN runtime for binary search trees.

The downside to hash tables is that they are slower than binary search trees (BST) for looping over and they also store a bunch of nulls so they use more memory than BSTs. Also if the data is difficult to hash well then there could be a lot of collisions (many objects hashing to the same bucket). Linked lists are one way to store the values in a hash table.

So why does any of this matter? I don't want you to get mixed up on the names of things with what hashing is and what a hash is in ruby. So why the name hash then if it is really a map structure?

Yukihiro Matsumoto then creator of Ruby said that the name has was inherited fro Perl. 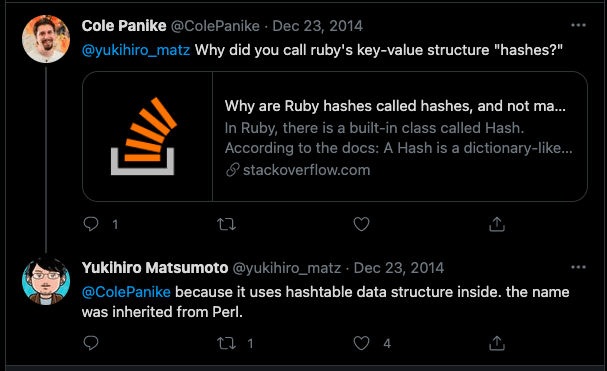 Ruby also has a hash method in the Object class. This is necessary to override if you override the eql? method while defining a class.

It is important that the keys of a map form a set. In Java you can actually call the keySet() method on a map and it returns a set of all keys. In ruby you can just call the keys method on a hash and it returns an array of the keys. The important fact of a set is that it contains no duplicates and how are duplicates identified? You would think if the eql? method returns the same thing then the objects are equal so Ruby would not add the objects. But look at this...

This is bad that we have 2 of the "same" objects in our map.

Two objects refer to the same hash key when their hash value is identical and the two objects are eql? to each other.

A user-defined class may be used as a hash key if the hash and eql? methods are overridden to provide meaningful behavior. By default, separate instances refer to separate hash keys.

A typical implementation of hash is based on the object's data while eql? is usually aliased to the overridden == method:

So it says we need to override the hash method to use a class we defined as a key.

Now you can see that we only have one user object in our hash and that the hash functions returned the same value.

In JavaScript, the closest thing to a Ruby hash is called a "map". Objects in js are kind of similar but since they are not easy to iterate over, and you cannot call all kinds of useful things on objects like "size" I don't think they are a contender. Java also has maps but you can choose to use HashMaps or TreeMaps right out of the box.

Construct and initialize a Map in JavaScript

According to Mozilla using the assignment operator with a map does not interact with the Map data structure. Thus we need to use Map methods.

For a short cut you could do:

Looping over a map in JavaScript

Let's up the attendance of each by 2 this time!

My first ever JS project

computingtogether
What was your win this week?
#discuss #weeklyretro
Should developers study 20 hours a week after work?
#career
Music Monday — What are you listening to? (Rock Edition 🤘)
#watercooler #music #discuss

Once suspended, computingtogether will not be able to comment or publish posts until their suspension is removed.

Once unsuspended, computingtogether will be able to comment and publish posts again.

Once unpublished, all posts by computingtogether will become hidden and only accessible to themselves.

If computingtogether is not suspended, they can still re-publish their posts from their dashboard.

Once unpublished, this post will become invisible to the public and only accessible to computingtogether.

Thanks for keeping DEV Community 👩‍💻👨‍💻 safe. Here is what you can do to flag computingtogether:

Unflagging computingtogether will restore default visibility to their posts.