When using the internet your devices are assigned a unique 32 bit (IPv4) or 128 bit (IPv6) identifier called an IP address.
You can find the IP address assigned to your network by clicking here.

If you wanted to pretend to be someone else when sending mail, you can easily erase your address and write a different one, this concept is referred to in this article as spoofing.

As it turns out, the internet works in the same way, on every chunk of data your network sends out conforming to the IP protocol, a header precedes your message containing the from and to fields of the internet. This header is written by your device.

The internet has its foundations in the IP protocol, but most traffic uses TCP/IP or UDP/IP protocol stacks, meaning a TCP or UDP header is included in our message. TCP is important in verifying the source IP of a message, and doesn't enable sustained IP spoofing.

The IP suite is quite complex and has a long history, but overall it defines a set of rules for a software implementation, called the IP stack.

In order to view the technical information on what an IPv4 header contains, take a look at the Internetwork Protocol Specification.

In the specification, an IP header is defined on page 15 as the following: 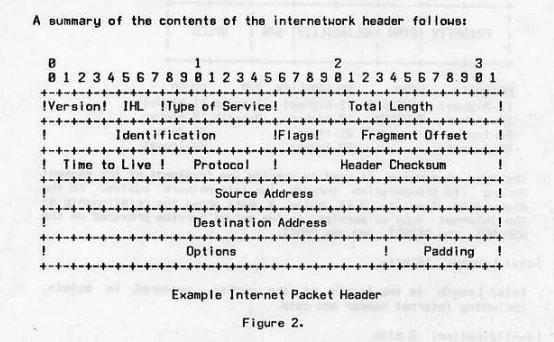 It's a bit strange to decipher but each - character denotes 1 bit, and each field is read from starting ! to ending !

For example, Fragment Offset is 13 bits, and there are 13 - characters from its preceding ! and subsequent !

On page 16 of the specification, we find a few interesting definitions:

The source address field definition, which we intend to change, specifically the last 3 octets (24 bits).

And the checksum field description, which we will also have to change in order for our datagram to be considered valid.

Before we get started with the implementation, something important to note is that we cannot feasibly spoof an IP with a TCP/IP stack. This is not possible because TCP connections begin with a 3 way handshake between sender and receiver, and who will the receiver of our message try to complete the handshake with? Our spoofed IP and not our actual one.

However we can use a spoofed IP in the UDP/IP stack, the UDP protocol does not care about a handshake, and will accept communication in a single direction, sender to receiver.

NOTE: Spoofing an IP does not actually require TCP or UDP as a higher level protocol. But we intend to use UDP because it supports port specification, making it easier to test our program.

Now that we've done our research, we have the information needed to determine what we want to change. But how will we modify an IP header?

Before we go searching for information on how an IP header can be modified in code, let's design our program.

Our program will use C, as it suits a low-level project like this. It will accept a single argument, the destination address.
All other configuration can be done in code and recompiled.
$ ./ipspoofer 127.0.0.1

It will use the UDP protocol in order to send data, since a 3 way handshake cannot be established under TCP IP spoofing.

During research the following libraries were found that allow us to modify IP headers:

libpcap
A packet capture library intended for the analysis of incoming and outgoing TCP/IP packets on a device, most likely a network device located in /dev/. However it doesn't seem to be intended for packet modification. The windows port is winpcap.

libnet
Libnet describes itself as "An API created to help with the contruction and injection of network packets [...]
Libnet includes packet creation at the IP layer and at the link layer as well as a host of supplementary and complementary functionality".

raw sockets (unix kernel API)
If you've ever invoked the socket() function using the socket library for a linux system, you've probably either used SOCK_STREAM or SOCK_DGRAM as they correspond to TCP and UDP respectively.
There are however a few more socket types, the one to be used in our code is SOCK_RAW. This socket type allows us to construct our protocol header manually, for protocol we will use IPPROTO_RAW.
This means we will construct the IP and UDP headers and supply them to the kernel.

To summarize the design, we are writing C code to create a program that will construct a UDP/IP datagram, then forward it to its destination IP. We will use raw sockets and syscalls provided by linux kernel as they are much simpler than utilizing a 3rd party library.

The caveat to an implementation using raw sockets is that we will have to create our IP and UDP headers manually, as opposed to simply modifying and injecting captured packets, as can be done with libpcap and libnet.

Let's get started writing code, the full source for this project is available here. But we will go over the main bits.

NOTE: Code was tested on Linux, FreeBSD, and MacOS. It compiles on all 3 platforms but does not send datagrams on MacOS.

After including the necessary headers, we will create our socket with the following arguments:

To construct the datagram to be sent, we need to fill a buffer with data, starting with the IP header, then UDP header, and finally the data payload.
We can copy a struct into memory with memcpy().

Finally, we fill out a struct sockaddr_in to hold info about where we are sending this datagram, and send it repeatedly with sendto() until SIGTERM is sent via ctrl+c.

Thats an overall gist of the code, there's more needed to make this work, and full explanation is inside the source code available at the github link at the top of this section.

View from the Receiver

To verify that our datagrams are being sent, we can use netcat to listen on an open port and display incoming traffic.
$ nc -lvu <port>
-l - Listen (run as a receiver).
-v - Verbose (will show incoming connection IP).
-u - Use UDP.

Run our program and we should see the following:

NOTE: MacOS has no verbose output, you will only see the data.

In order to verify traffic is being sent by our device, Wireshark can be used to capture and analyze outgoing packets.

If all is well, wireshark should look like this, a blue UDP protocol packet with the source being our spoofed address.

Inspecting the packet, we can see the contents above.
Everything looks good, source IP, destination IP, and ports are set. Checksum was set by kernel and is verified.

If packet_size is set larger than the MTU, the datagrams will not be sent, and will not appear in wireshark.

A network device MTU refers to its Maximum Transmission Unit, which is the maximum amount of data that can be sent in one IP datagram without fragmenting. Typically an MTU is 1500.

This code does not work on MacOS, Wireshark analysis implies the kernel is overwriting our source IP and removing our UDP header. The MacOS kernel also does not calculate our checksum for us, which may be the reasoning behind this.

Conner
https://github.com/XNUConner
What's your favorite piece of software that you built for yourself?
#discuss
Aviyel announcement 📢: Supercharging OSS communities 🦄 with rewards and Tokens! [Product Hunt launch June 1st]
#web3 #discuss #startup #opensource
Which day of the week do you get your best coding work done?
#discuss #productivity