Data that a developer hard-codes in place of real data.

In my observation, mock data has tended to be used in a rather loose, slipshod, careless manner. Unlike documentation, it is treated as the garbage of software material. (Sometimes even referred to as "garbage data"). People will try to avoid writing it by using elaborate "generators" such as jFairy or zed.

My argument in this article is that mock data, when treated with respect, turns out to be a supremely useful, versatile and valuable tool.

In this article I will elaborate on each of these uses.

Let's begin with an example that should be reasonably familiar to most developers:

Suppose we want to capture and validate one of three kinds of username:

We might begin by modelling the username field as a string | number data-type that covers all three kinds of username.

The above type expresses a part of our requirements but not all of them. Specifically, it doesn't express such facts as:

How might we express these requirements in code prior to writing a validation routine?

One way might be to write descriptive comments next to the field. Another way might be to bring in a hefty and cumbersome "validation framework" such as zed and try to twist and wrangle it to the shape of our specific requirements.

Or... we could simply create a few mock values:

We have now enumerated the variants of the username field that we expect to deal with.

Looking at these mock values, we might also begin to ask questions. For example: does a numeric username have a lower and upper bound? Safe assumptions might be 0 and Number.MAX_SAFE_INTEGER, but we might want to check with a domain expert.

The point is, by laying out all the expected values of this field together in one view, we give ourselves an opportunity to think more deeply about the range of possible cases and how we will deal with these cases. In this way, mock data becomes a kind of tool for concretising requirements.

We can now begin to think about how we might design and test the validation routine.

As we begin to write a username validation function, the Username type definition combined with UsernameMocks given above lead directly to four unit tests:

This isn't a coincidence – the whole point of mock data is to represent kinds of values we expect to deal with. Our unit tests need to do the same thing, to verify that the system under test behaves as we expect.

We can now begin to implement the requirement, writing each of the unit tests one by one, and writing enough code to make it pass.

Alternately / additionally, we could use this information about expected inputs to scaffold the function with comments:

This is just scratching the surface!

As we write the tests, we notice that we can reference the mock constants directly inside the test code, to avoid repeating ourselves.

Notice how clean and readable this test is! The naming of the mock constant reveals the intent of the test beautifully. Rather than pollute our test code with concrete values, we can extract them to well-named constants and have the test code focus on the relationships between the values.

The re-use can go even further. Suppose, in a different part of the code, we want to display a user profile which includes the user's username. We want to style the text differently depending on what kind of username the user has.

We might extract the username type and mocks to its own module, say, username.ts. Then we can re-use the mock usernames in our tests, like so:

In future we might need to maintain username code – e.g. support additional kinds of username, remove support for a kind of username, fix a mistake in one of the mock values, etc. 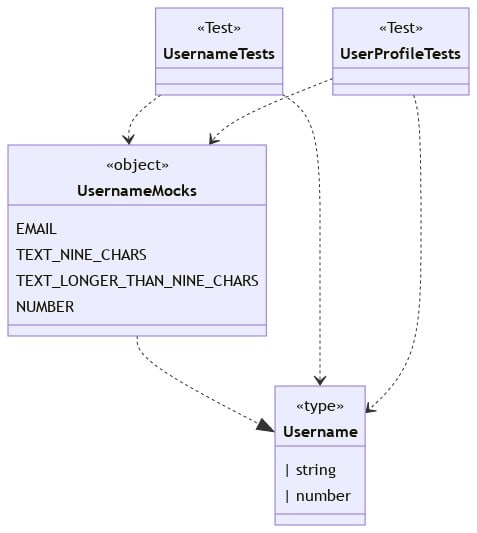 The end result is that any test code that deals with mock values will be:

Imagine if our application was augmented with mock data in such a way that all of its features could be used while running purely off the mock data, without ever having to connect to any real data-source. (By 'data-source', I'm referring to things like databases, APIs, etc.)

This capability would offer some unique advantages:

Mocking all of an application's data-sources might seem like a daunting task. However, in my experience, it's easier than it might seem, especially if done in the early stages of a project.

But there are a few pre-requisites.

Firstly, the application needs an interchangeable data-source, so we can switch between real data and mock data. We need to write all our application code against that data-source abstraction, without concern for where the data actually comes from. 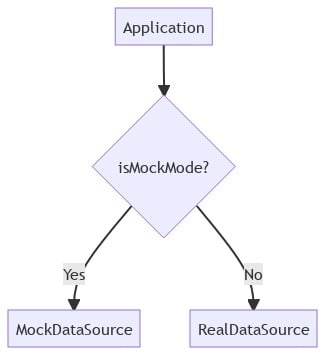 Secondly, we need to be able to switch the Application state between the real data-source and a mock data-source. 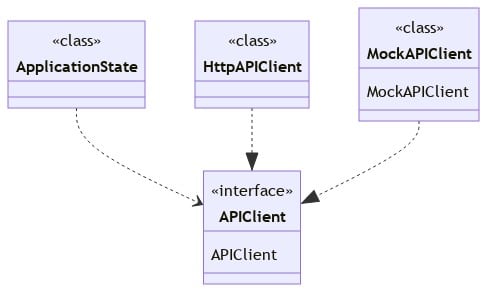 The "switch" could be activated by clicking a UI element, e.g. a small checkbox in the footer area of a web page, which is only visible to Admin users. The click handler toggles the Application state between real data-soure vs. mocks.

Screenshot of a mock data checkbox

Thirdly, we need all of our application state to be mocked in a set of mock constants. This is easiest if the application state is modelled in some more abstract way, e.g. using classes, interfaces, types, etc. That way, we can easily construct our mock data as a realisation of those abstractions. 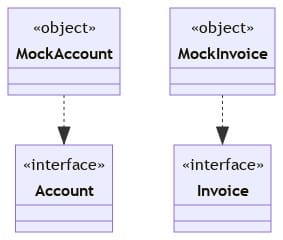 It would take significant effort to completely mock the data-sources of a pre-existing application. But that effort could be broken down into smaller pieces and pursued incrementally, similar to adding unit tests.

Once our application is completely augmented with mock data, maintaining the mock data going forward would only add a small overhead (and might even boost development speed, as described in sections 1 and 2).

How about switching between multiple mock states? One way would be via a collection of mock controls, presented to Admin users in the UI, allowing the mocks to be adjusted at whatever level of detail is needed. These could be presented in a pop-up modal or panel activated by clicking a Mock Settings button located somewhere out-of-the-way and only accessible to Admin users.

Screenshot of controls for more complex customization of mock data

Once our entire Application is able to run off mocked data, not only can we operate the application while a data-source is unavailable, but we can also operate and develop application features prior to the data-source even supporting them.

Mocking our data-sources decouples our team's development efforts from other teams.

For example, imagine we are working in an Invoicing team in an online banking system. We want to build a "Foreign Accounts" feature. Suppose this feature depends on data from an Accounts team. Without mock data, the Invoicing team might have had to await until the Accounts team had built certain APIs, which it would then consume.

GANTT chart depicting hypothetical timelines with vs. without mocks

We can develop and test all the Invoicing logic against those mocks. When the Accounts team does finally support Foreign Accounts we can connect our Invoices system to theirs. Any dissonance between their models and ours can be solved by adding a mapping layer, e.g. an AccountsAPIDataSource which implements AccountsDataSource methods by calling AccountsAPI methods.

Notice how we are building our Foreign Accounts feature against a ForeignAccountsDataSource, which functions as a kind of contract between the InvoicingApplication (which we control) and the AccountsAPI (which the other team controls).

This contract helps us to think more clearly about what we need from the Accounts team - the inputs and outputs and behaviours. So we can communicate more clearly with the teams who we depend on about the data we depend on them for.

Bonus: And we're talking about more than just simulating expected (or unexpected) application states! We can also simulate large data-sets (e.g. to test scalability), error conditions (to test error handling logic), delays (to test performance under various network conditions) and... well... anything else it's possible and useful to simulate. The ability to simulate specific application states is kind of a super power.

We've looked at four interrelated benefits of treating mock data with respect and rigour, with examples / pseudo-code for each.

These benefits come at a cost. Using mock data in this way requires application code to be structured in a certain way (isolation of Application state). And it takes significant effort to augment a pre-existing application with mock data, especially if that application has complex logic.

Given all of the above, mock data seems best suited to long-term software projects of moderate complexity, where the advantages of using mock data outweigh the costs.

Books that inspired me:

Java - How to Apply or Remove Data Validation in Excel

Once suspended, conw_y will not be able to comment or publish posts until their suspension is removed.

Once unsuspended, conw_y will be able to comment and publish posts again.

Once unpublished, all posts by conw_y will become hidden and only accessible to themselves.

If conw_y is not suspended, they can still re-publish their posts from their dashboard.

Once unpublished, this post will become invisible to the public and only accessible to Jonathan.

Thanks for keeping DEV Community 👩‍💻👨‍💻 safe. Here is what you can do to flag conw_y:

Unflagging conw_y will restore default visibility to their posts.