At Cossack Labs, we build data security and encryption software. Taking care of mitigating threat vectors for our customers, we can not give any chance for weaknesses in our software. That's why, over the years, we elaborated an arsenal of approaches to find and prevent defects early in the security software development process. In this series, we share what to look at, how to spend effort and “shift security left”, and which tools to use.

To begin, software security tests are just like any other kinds of tests—except that most of them don’t verify predefined behaviour. Instead, they check for the absence of certain behaviours and weaknesses known to lead to some security risks.

Many known security issues arise from undetected software behaviour that doesn’t visibly break the main functionality of the software. Such bugs are of the most cunning kind because everything seems to be working as intended.

Separate testing ensures that new commits and builds don’t introduce security problems, and it is an essential practice to be applied to software with high demands to security.

As a part of the continuous integration (CI) and running tests repeatedly, security tests allow to identify and fix such issues as memory bugs, input bugs, performance-hindering issues, insecure behaviour, and undefined behaviour.

Nevertheless, before the rise of continuous integration, writing and implementing such tests wasn’t everyone’s idea of a great resource allocation even within the security engineering community (although manual security check is an example of even worse time expenditure).

These days, when security-related scares and threats arise repeatedly, writing security tests should become everyone’s favourite hobby because every piece of software contributes to the overall security or the lack thereof.

The next step is gaining an understanding of how these controls are affected by execution flow and input data, whether it can be altered, or is it possible for the expected behaviour to fail unexpectedly.

📎To ensure the software product is safe from most vulnerabilities, security testing process could include several takes. For example: 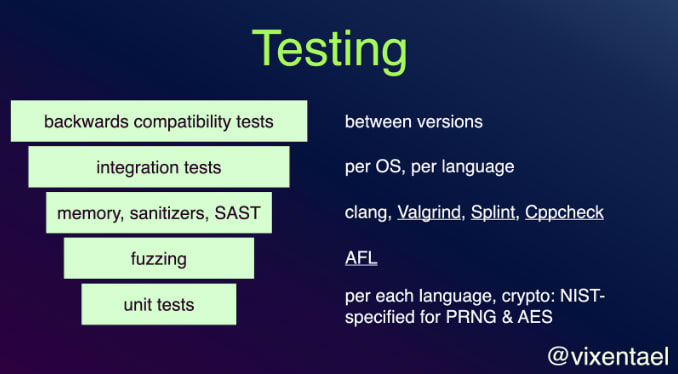 📎You could go with DAST with the following open-source tools:

While these tools are not a substitute for careful inspection by a security professional, at least they ensure a certain level of formalizable verification for security controls.

Upon verifying that security controls of your application are working properly, it’s time to extend the testing efforts to code checking, fuzzing, dependency scanning and other causes of security errors.