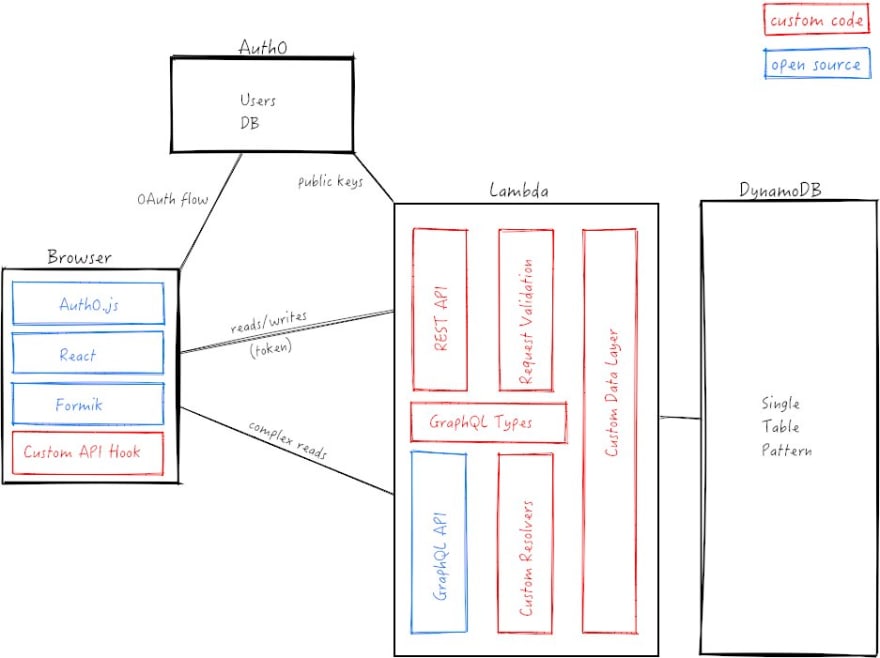 About a year ago I shipped Fizbuz v1. It was built on AWS Lambda, DynamoDB and Auth0. I had discovered a new, but really interesting, open source tool called Architect that made it really easy to spin-up AWS resources and build fast, and for a while I was really productive. And it worked well... for a bit.

After doing customer discovery and building a prototype on Rails, I had clear backend requirements:

I had never built a web application using Lambda or DynamoDB, so I was in full "learn" mode. I soaked up everything I could about how to build these kinds of applications and ended up building a ton of API and data layer tooling from scratch.

This felt very productive at the time and I was incredibly proud of how slick it was that I could define a new business object in GraphQL and that matching REST API endpoints and data layer CRUD operations would be automatically provisioned with minimal additional work.

After a furious few months of coding, I shipped v1 of Fizbuz and started onboarding users. As I came in contact with users, I started to collect more and more feedback on how to improve the product.

This is where I started noticing a slow-down in my ability to ship new features. As I would context switch from non-technical tasks (talking to customers, doing discovery, networking, etc) back to the code, I would sometimes have a hard time understanding how the code worked. Since I wasn't using third-party tools for commons tasks like client-side data fetching or API request processing or database interaction, I couldn't rely on documentation or Google to get unstuck.

The issue came into much sharper focus when I would try to onboard other developers for contract work. Since I wasn't using tooling that they were familiar with, too much time was wasted getting them up to speed on how the system worked, rather than spending time on shipping new customer-facing features.

Screeching to a Halt

A few days ago a user alerted me that when they were using Fizbuz, they noticed that the app seemed to be caught in an infinite loop and was making an endless series of HTTP requests to the server. This wasn't visible in the UI, which is why I hadn't noticed, so I dove into the codebase to figure out what was wrong.

It turned out that I had refactored some client-side data fetching code in order to be more compliant with React best practices around Hooks and Exhaustive Deps. I unwittingly broke perfectly good code and created an infinite loop. In this case, the requests were idempotent reads, but next time who knows? What if they had been writes?

I love making things, I think all developers do. And I'm proud of much of the code I wrote. It solved a real problem for me and did so in an elegant way. But I had to look myself in the mirror and ask myself this:

Do I really care about building tools to layer REST and GraphQL APIs on top of DynamoDB?

I decided that I care more help developers build better networks and find better opportunities, and my engineering cycles for the rest of the year will be spent on building product and features that deliver on this.

I am currently in the process of evaluating stacks that meet my original requirements and talking to developers who have experience with these stacks and are available for contract work. Right now it looks like AWS AppSync, Prisma and Hasura are strong contenders for the backend and data layer.

I'll be writing more about my journey to ship a v2 of Fizbuz, so please feel free to follow along!

If you have any suggestions on a stack I should look at, please feel free to leave a comment.

business ideas that helps you to become financial free

🅲🅰🆁🆃🅴🆁
Hacker, Conference Organizer (cascadiajs.com) and Angel Investor (200ok.vc).
When can you declare yourself a Full-stack Dev?
#discuss
What was your win this week?
#discuss #weeklyretro
I passed the CPACC exam
#a11y #career #certificate

Once suspended, crtr0 will not be able to comment or publish posts until their suspension is removed.

Once unsuspended, crtr0 will be able to comment and publish posts again.

Once unpublished, all posts by crtr0 will become hidden and only accessible to themselves.

If crtr0 is not suspended, they can still re-publish their posts from their dashboard.

Once unpublished, this post will become invisible to the public and only accessible to 🅲🅰🆁🆃🅴🆁.

Thanks for keeping DEV Community 👩‍💻👨‍💻 safe. Here is what you can do to flag crtr0:

Unflagging crtr0 will restore default visibility to their posts.