I am 38 years-old and I still palm my tampons to hide them when I go to the bathroom at work. When I go to the restroom I mentally start humming the Mission Impossible theme in my head and go through a whole ordeal of getting the tampon from my bag into hand get to the bathroom without my coworkers noticing. Though I am sure what in my head plays like Mission Impossible: Tampax Protocol comes closer to a Mr. Bean sketch to my coworkers if they paid attention.

Hi, my name is Crystal. I have Social Anxiety Disorder and I menstruate.

Here is where I will warn that I will get slightly TMI on a scientific level.

My period sucks. I’m okay with what it means academically, but on an emotional level it can seriously get fucked. I do consider myself lucky in some sense. My cycle operates like clockwork. I know the day it will come and many times tell the 5 hour span it will start. For many this is not something they experience. Instead it’s a guessing game of when and where their cycle will start, and that uncertainty can lead to major inconvenience and mishaps.

But the one thing I do share with others is major period pain.

Every month I experience pain that is worse than the time I was hours away from dying of pneumonia. My lungs filing up with mucus and slowly losing the ability to take in air was less painful than the 2-3 days a month my body throws tantrum because I am not going to have baby. 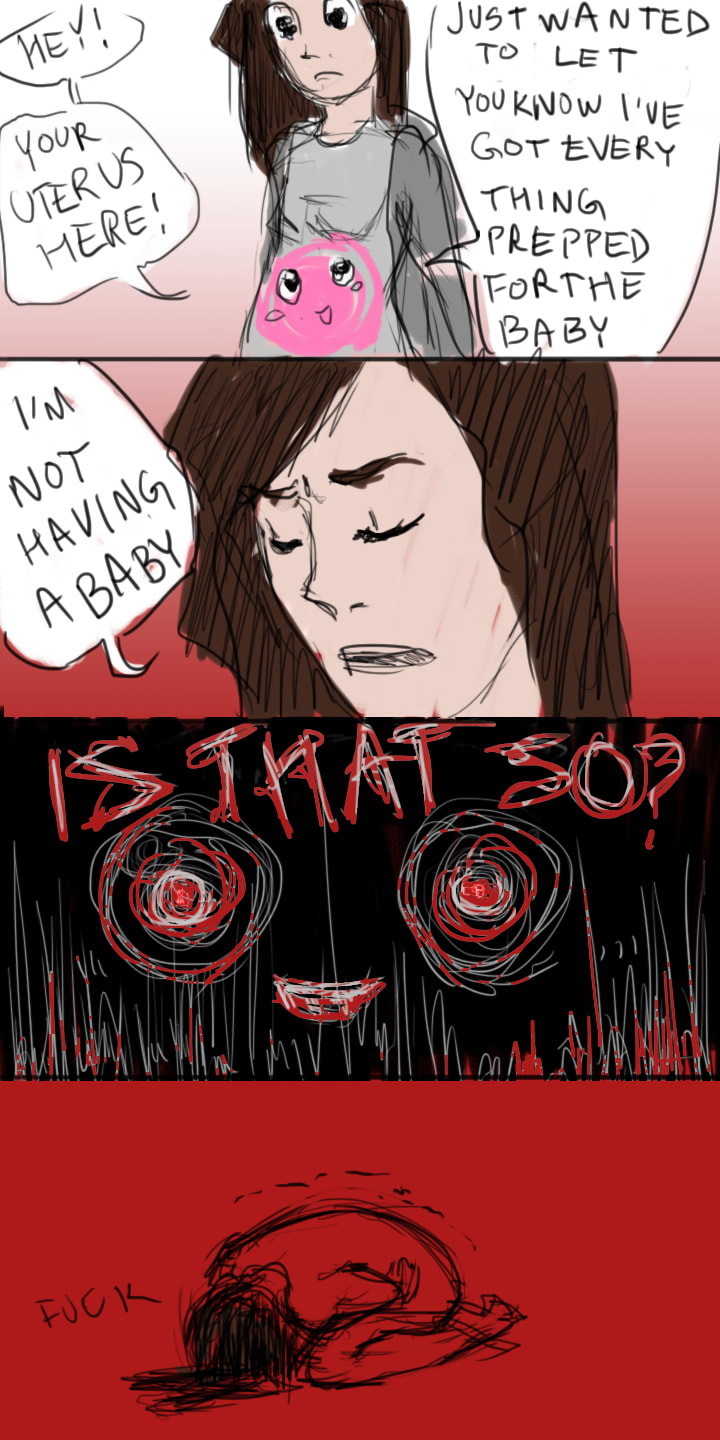 Rarely do I take time off because of period pain. Earlier in my career it was not an option. Time off meant no money and sometimes no job due to employers’ attitude if you dared to take a sick day for anything other than being close to dead.

The latter part of my career I’ve had the opportunity to work for companies where working completely or partially remote hasn’t been much of an issue. I try to align my schedule to work from home during the worst days. Where I can still be productive but also able to prop my MacBook on my stomach to act as a $3000 heating pad.

Every month I tell myself that I will take one sick day. Am I really that productive writing test cases while wishing I could kick myself in the uterus every 5 seconds? More often than not I reject putting in for a sick day and tell myself to push through. The company I currently work for taking a sick day isn’t an unforgivable sin, but the ghost of the American work ethic pulls a Riker Maneuver, cracks open a White Claw and breathes heavy down my brain.

The fact is working through the pain is counterproductive. Presenteeism, a fancy name for working while sick, is rampant in the American workforce. Where corporations could throw a ticker tape parade with the number of white papers on the cost of absenteeism in the workplace, presenteeism is rarely discussed. Much of the research conducted on the topic finds that the cost to businesses of employees working while sick may be far greater than employees taking days off. According to Forbes, “An American Productivity Audit calculated the cost of presenteeism in the U.S. to be more than $225 billion a year; 71% of that is due to low productivity.”

Presenteeism is also the perfect vector for communicable diseases. The office becomes a minefield during flu season. It's usually not matter of if, but when you will get sick. The flu bounces between employees more often than the ping pong balls on the table touted as a "cool perk" when they were hired.

It's up to companies to stop the spread of presenteeism. A great company culture is respecting employees and allowing them to be healthy. A healthy employee is a happy, productive one. It's might sound cliché but it's the truth. As I touched briefly above, a trend among tech companies is to offer "cook perks" like ping pong tables, unlimited snacks and 6 kinds of IPAs on tap. These perks are ok (IPAs on tap does seem punitive to me) but ultimately they are empty gestures if not offered alongside meaningful sick leave, remote and flextime policies.

Crystal Preston-Watson
There can be only one. Read about the misadventures of a Highlander in the world of tech. Musings on testing, accessibility and the scourge of open office plans.
Chrome Extensions of the Month - January 2023
#productivity #webdev #javascript #beginners
Music Monday — What are you listening to? (60's Edition)
#watercooler #discuss #music
Understanding the javascript:void(0) Statement
#javascript #beginners #programming #discuss

Once suspended, crystalprestonwatson will not be able to comment or publish posts until their suspension is removed.

Once unsuspended, crystalprestonwatson will be able to comment and publish posts again.

Once unpublished, all posts by crystalprestonwatson will become hidden and only accessible to themselves.

If crystalprestonwatson is not suspended, they can still re-publish their posts from their dashboard.

Once unpublished, this post will become invisible to the public and only accessible to Crystal Preston-Watson.

Thanks for keeping DEV Community 👩‍💻👨‍💻 safe. Here is what you can do to flag crystalprestonwatson:

Unflagging crystalprestonwatson will restore default visibility to their posts.