Cypress is an amazing testing framework swooping in to save all of our Javascript web development projects. As with any testing, its nice to have clear and easily generated reports. This is where Mochawesome comes in. It gives us nicely generated json that can be merged into an html page. Although Mochawesome does most of the work for us, it can still be a bit tedious to set up. Luckily for you, I have developed cy-report-setup-helper, an npm package to help out with this. This walk though will show you just how easy it is to configure your project with Cypress and Mochawesome using cy-report-setup-generator.

NOTE: For this project we will be using Angular Cli (any version will do)
Because the report creation script of this generator runs the "start" script in your package.json file, if you are not using Angular but instead using React, this walk through will still work.

NOTE: it does not matter whether you add angular routing or which style you choose for the purpose of this walkthrough

next, we will use npm to install cy-report-setup-helper (version 1.3.4)

Once cy-report-setup-helper is installed, we will run the generator which will add the needed dependencies for Cypress, Mocha, and Mochawesome to your package.json along with the scripts for where to store your reports upon running your test.

after running this command you will notice that a new directory has been created named integration-reports/ and a cypress.json file has been created with the properties needed for the output of the reports.

Your package.json will have these newly created scripts for reporting and cleaning up old reports.

A script was added to your integration-report/ folder named cy-report-tree-generator. This script will read your integration directory once your reports, screenshots, and videos are created and generate a report-tree.json file.

Only one step remains and that's to install all of the newly added dependencies.

After npm finishes the install, we should be all setup and ready. Yup, its that easy. We can now test everything out.

This will open cypress and add a folder of example tests.
In order to run the application and generate all of the reports, we only need to run one simple command.

This will take a little bit of time to run through all of the cypress example tests but after you will see the public folder inside of your integration-reports/ directory filled with the output. 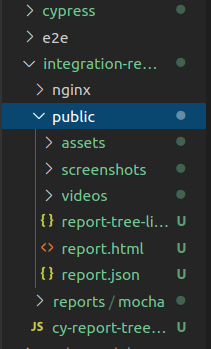 Now, open report.html in a browser and marvel at your report! 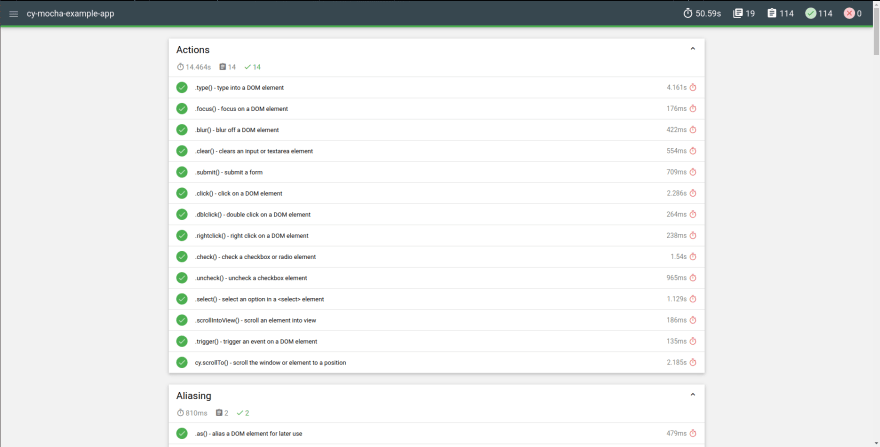 Thanks for following this tutorial and I hope my npm package helps with your project. If you have any questions or suggestions fell free to connect with me on linked in or share in the comments below. Also, feel free to open any issues or requests and collaborate on the package at github. cy-report-setup-helper at github

Robert Dale Morris
I am a US Army Veteran of O.I.F 2004-05, a DSU Graduate with a Bachelor's of CS, and a 2017 SVA Google Scholar.
Code Coverage With Cypress & Angular
#angular #cypress #npm #javascript