The build process involves a series of automated tasks performed on raw source code to prepare that code for future deployment.

Instead of manually calling the compiler and package manager as dotnet restore/dotnet build, you can automate this process, especially if you are working with multiple solutions/projects that depend on each other and require certain steps to be built.

Build automation is not just about building the code

Rather, it provides many features and rich tools that help with:

You know these build servers are widely used, but there are also many online tools as SonarCloud etc. used by companies and OSS projects.

😎They are cool, no reason to stop using them, but the way how you configure them is not a daily pleasure. 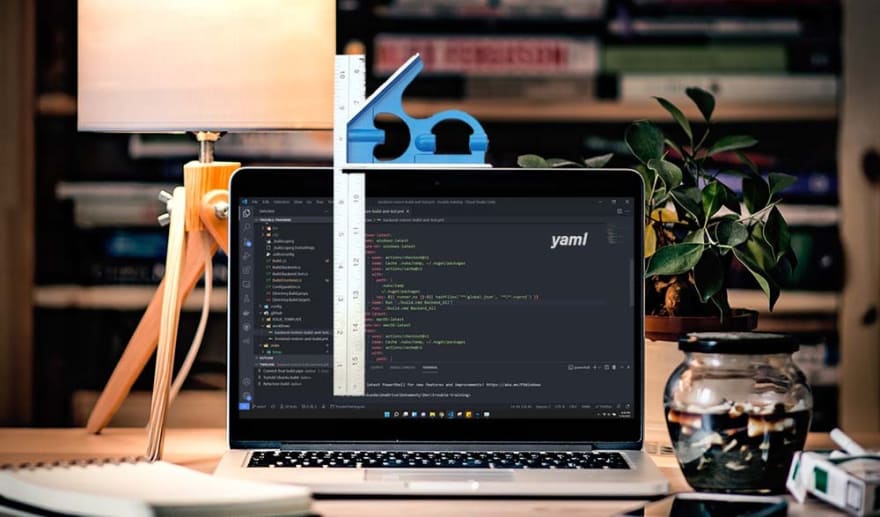 Nuke is hire to provide a nice typed and cross-platform experience by setting up the build process using console application. The oficial documentation can be found on www.nuke.build

It helps you define dependencies between different actions (targets) and automatically generate code for CI/CD in advance, from your C# code using the code base you know from your daily work.

Nuke is not a compiler, it's just an abstraction that gives you a pleasant experience with your code. It provides built-in functionality with source generators driven by attributes and builder patterns.

It's also extensible and currently offers a variety of integrations. So you get a beautiful API that works across platforms and is not just for C# programmers!

Now you can run the quickstart setup with nuke:setup from your project root directory. This is usually the folder where you have the .gitignore file.

⠀
NOTE: As you can see, you can customize the root folder and the location of the build project! Make sure that the defined paths/folders are not part of .gitignore. They must be part of source-control!
⠀

You can skip the QuickStart if you want, but it generates some important cross-platform execution scripts that help install the SDK!

Let us take a look at the generated files: 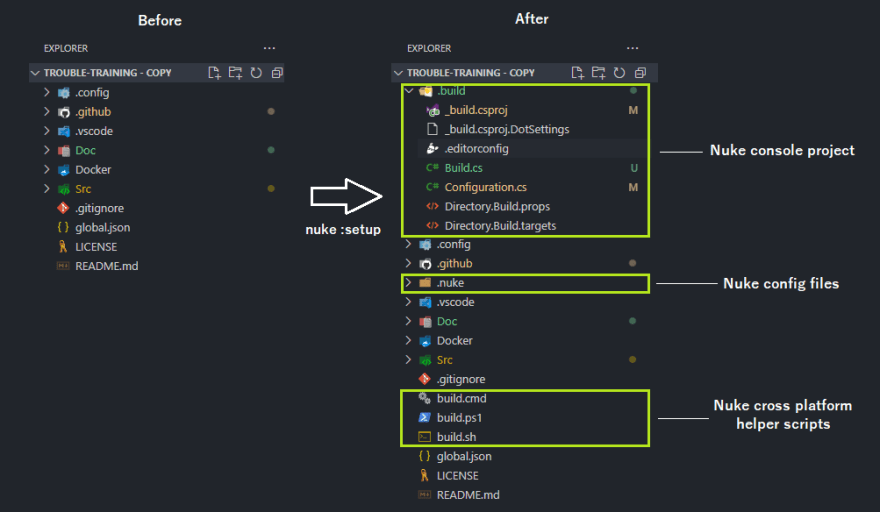 The ./build/Build.cs file is the entry point of the Nuke console applicati.

This is some dummy example of build:

It contains the console Main() with the default Target.

In the abaw example, the default target is Compile = > (Run(x = > x.Compile)). This means when you run the script ./build.cmd, it will use Compile and create the execution plan for it!

To visualize the dependency between the defined targets, you can run nuke --plan and get the following visualization in your browser:

To show an example of a build system, I will use free opnesource demo app which I have in my github.

The demo contains several projects that are interconnected. I want to build the frontend and the backend separately and do this on each push on Github to verify that the code build is possible and bug-free, and to ensure that all backend tests can be run OK.

This is the Nuke build plan for this project (nuke --plan):

As you can see, there are multiple Targets and dependencies between them. Sometimes you just want to build the frontend, other times the backend, or all together.

⠀
NOTE: With Nuke you define tarets and it is up to you how you define the relationships between the tarets with the builder patterns .DependsOn(...), .Before(...) , .After(...) and so on..
⠀

Since the demo consists of several parts (frontend, backend, tests), you want to avoid putting all the code in one file. Instead, you can use partial class.

The main Build class derived from base NukeBuild provides some event callbacks that can be overridden:

Let us take a look at Main Build.cs for this demo:

The GitHubActions attribute ensures that the correct Github workflow .yaml is created under the root directory ./github/workflows/.

This is very handy as you do not have to write it yourself. Same goes for AzurePipelines, SonarCloud or any other tools out there! (supported by nuke)

This informs Nuke to generate the source code as .github/workflows/backend-restore-build-and-test.yaml.

As you can see from the .yaml definition, Nuke uses the coross-platform script ./build.cmd that I mentioned at the beginning of this article.

After you commit your code, Github will use this file to perform the build process for you.

Let us go ahead and look in detail at how the backendtargets Clean, Build, and Compile are configured:

These are backend test targets

The project contains unit, integration and API tests. They need to be executed together or separately!

These are front end targets

The frontend needs to be restored (packages installed) and compiled in a few steps, as you can see in the code below.

Next time I will show you packing and notification process.

You can find the full source code under .build folder:

Once suspended, damikun will not be able to comment or publish posts until their suspension is removed.

Once unsuspended, damikun will be able to comment and publish posts again.

Once unpublished, all posts by damikun will become hidden and only accessible to themselves.

If damikun is not suspended, they can still re-publish their posts from their dashboard.

Once unpublished, this post will become invisible to the public and only accessible to Dalibor Kundrat.

Thanks for keeping DEV Community 👩‍💻👨‍💻 safe. Here is what you can do to flag damikun:

Unflagging damikun will restore default visibility to their posts.