The joys of a new job.

You get there on your first day and after the introductions, you are given your first task: to get the project up and running on your dev box.

The task comes with a link to the wiki, which has THE instructions:

You know how it is going to end. And just in case you had any doubts, your new boss just confirms it:

“It’s probably a bit out of date, so can you please update it if you find any issues?”

Two days later, you emerge triumphant, proud of your achievement, and with a smile on your face: Your updated instructions are so accurate that the next person joining will be forever thankful.

The instructions on the wiki seem like a good enough solution, given that each member of the team needs to pass the ordeal just once ... except when:

But sometimes, some component, for some unknown reason, somehow stops working, and it won't ever start again.

Docker Compose is a tool which allows one to define a multi-container system using one file, and to run them in Docker, creating a private network to isolate the system.

A Docker Compose file that will start a Postgres and a Redis is as simple as:

You can configure the container for your project and Docker Compose will be able to create a new environment, mapping some of the ports and files between the internal containers and your dev box. 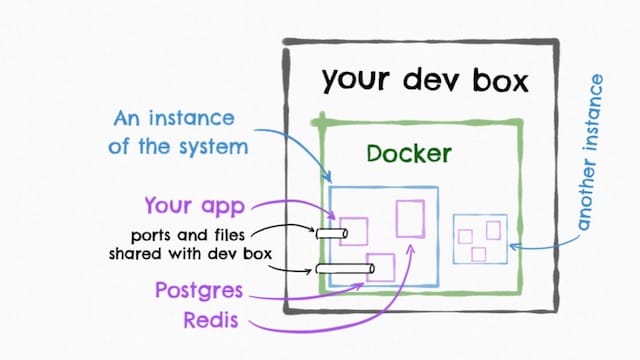 Using Docker Compose to set up and run our local development environment gives us:

A production-like environment or not?

When talking about Docker, one of the benefits usually mentioned is that it allows one to run a production-like environment anywhere.

Indeed this is a big benefit. Your CI server should run its tests against a production-like version, and you should be able to run such a version locally, but for the day to day development experience, you want a setup that allows for a fast feedback cycle.

For example, you don’t want to minimize your JavaScript files for each and every change that you make and you probably want some sort of auto refresh.

This development environment should include any build tools that your project requires, so your setup instructions should not have any “install maven/npm” step. Those tools should come within a Docker container. This way, everybody in the team will be using the same tool version in the same operative system version.

Even if you don’t use Docker in production, it is well worth using it just to make setting up or upgrading a dev environment an uneventful process.

This process should be as close to “docker-compose up” as possible. Nothing more.

Don’t treat your dev box as some big global mutable variable. Use Docker Compose to treat it as a nice immutable one.

You have here a detailed example of how to Docker Compose a local developer environment.