Serverless has been gaining more and more traction over the last few years. The global serverless architecture market was estimated at $3.01 billion in 2017 and is expected to hit $21.99 billion by 2025. The number is reflected in the increasing amount of enterprises starting to look for ways of decoupling their current monolithic architectures and migrating their stack to serverless.

Read more about the popular enterprise use cases for AWS Lambda.

Looking back at the container revolution and how long it took for serious enterprises to start banking on it, it's likely that we're still a couple of years away but because the rate of adoption has been quicker for serverless, we might see the migration pick up a bit sooner than expected.

Our team at Dashbird has done extensive research about how companies use serverless, what common pain points they have, and how developers go about solving them.

In this article, we will cover the most common use cases and give an honest breakdown of what to expect when using AWS Lambda.

If you'd like to learn more about the practical side of how to migrate to serverless and make your infrastructure really work post-transition, make sure to check out our webinar here: 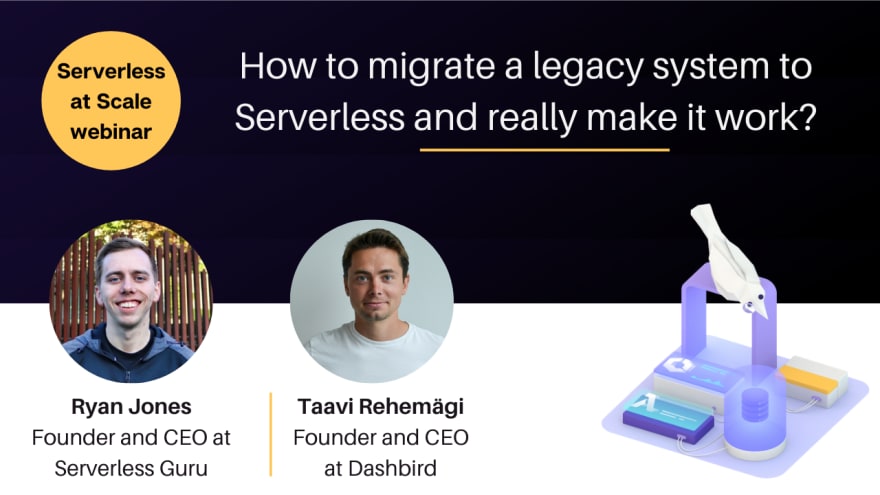 REST APIs (with The Serverless Framework or APEX etc.)

This seems to be the most popular use case for AWS Lambda and there's no surprise there since everyone needs some sort of an API in their stack. It's also one of the strongest use-cases for AWS Lambda because of its big benefits in scalability, ease of use, simplicity, and of course low cost. However, decoupling an existing system into smaller logical units shifts the difficulty from code to orchestration and introduces some new challenges.

An amazing and very useful use-case for AWS Lambda is to pair it up with S3 storage. After a user uploads a file to S3, a Lambda function is triggered to process the data. This can be image optimizations, video transcoding, or whatever you may need. It's up to you to handle the data further, store it in a database or return it to S3.

Using Lambda functions as CRON jobs is another excellent use case. In most cases, it's a relatively easy task to decouple an existing CRON server to AWS Lambda.

Processing a potentially infinite stream of messages -- it's something that we've been doing in Dashbird for a while now without much headache. The reason why Lambda functions are good for stream processing is the scalability aspect and the pay-as-you-go pricing model. Keep in mind that compute time is not cheaper (than EC2 for instance) but if the events are infrequent and sent in bursts, you'll end up saving money.

The biggest benefit for anyone using serverless is the dramatic increase in development speed. Sure, it can be more cost-effective and is scalable by default, but for the most part, development time is actually the most crucial metric for any tech company. This is why high levels of abstraction really benefit companies. In our experience (being a serverless operations company), observability and tooling around serverless is the biggest pain point for new AWS Lambda users. Another thing you want to keep an eye on is the design-patterns you use.

Event-based architectures are really hard to debug, not only finding failures but also latency can get really high. This tech stack usually produces lots of invocations and it might get expensive. That's what we want to solve. Giving you the overview and insight you need to make changes that can have a huge impact on your overall system health and performance.

This post is loosely based on the CNCF (Cloud Native Computing Foundation), a classification of the top 10 serverless use cases. We listed the use cases that might encounter the biggest observability problems.

Ansible In Action: How AWS Is Solving Challenges Using Ansible