Hi, everyone? How is it going? I'm here trying to learn how to share a little of my knowledge in order to learn much more with those of you who have come this far. So don't hesitate to comment, okay? Your feedback is so important. And it doesn't matter if it means that I need to stop.😜 lol!

In this first article in English, I will try to be straightforward with regard to the use of Docker from the point of view of a mere software developer, which is my point of view.

Solutions, such as in-memory databases (Derby, H2, among others) or the "mocking" of external services (using libraries like Mockito or solutions like Wiremock), have always been good solutions during the development of some solutions until I learned about Docker. This doesn't mean that I've replaced those items from my "utility belt" with Docker. It is because I don't believe in a "silver bullet." Also, we need to deal with the "it-depends" thinking that clarifies the issues that we are working on in the technology world, which evolves every day.

The other interesting thing is that you may be able to test something that perhaps runs on a different OS that you're working on right now in a couple of seconds. You can do this instead of waiting for an IT Team to provide you with a kind of development environment that you need to communicate with. (Whoever has never faced a scenario like that probably will not understand what I'm talking about. Maybe you do. Am I right?)

For more details about Docker, take a look at the documentation.

Listing of the available Docker commands:

Getting detail about a given Docker command usage:

What version am I using?

How can I see the available Docker images that are in my local environment?

Where can I find and get more Docker images?

I'm used to getting Docker images from the Docker Hub site.

Cool! Okay, I've got the image that I want to execute, but now what? How can I execute it?

Let's suppose that you would like to download a Docker image with a Postgres database; you should perform a search with a "postgres" word in the Docker hub. You'll find the official Docker image with Postgres and others that are not official.

Docker images have a version control that is related through "tags" in order to identify the version.

By default, in case no tag is informed, the "latest" version will be used. Maybe you'll find a lot of available "tags." This means there will be many versions.

Right here, it's up to you! Choose one tag, and go ahead! (In this article, I've chosen the latest one!)

There are two ways to download Docker images: using a "docker pull" command or a "docker run" command.

Check it out below. I'm getting the official "postgres" Docker image:

How can I delete Docker images from my local machine?

Watch out! I hope you're sure about this action, okay? Maybe it's not a good idea. Maybe you'll need such Docker images in the future.

Ok, if you're really sure about it, don't forget to stop and delete the containers derived from the target Docker image, or you can use "brutal force" putting the "-f" flag at the command.

How can I delete the Docker images that I'm not using from my local machine?

Be careful, buddy! Don't delete Docker images that shouldn't be deleted. Did you?

The command is "docker run." Such a command has a lot of parameters, so I recommend that you take a look at the command help for details.

Don't worry about the high number of available parameters. Normally, the maintainers are accustomed to providing usage guides for its Docker images.

In our sample, I'm starting a container based on the "postgres" Docker image:

What does the "Pulling from..." output mean?

What containers are running?

Do you want to see all containers that you have created on your local machine? Add the "-a" flag at the "docker ps" command.

I'd like to stop my active containers. How can I do it?

You need to use or the "ID"s or the "NAMES" of the active containers and perform the command below.

Tip: It's possible to stop many containers with one command only. You'll need just to provide the "ID"s or "NAMES" of the target containers.

I want to delete my containers. How can I do it?

Tip: It's possible to delete many containers with one command only. You'll just need to provide the "ID"s or "NAMES" of the target containers.

One more thing: if it is what you need to do, don't forget to stop the containers that are running. Or you can use the "brutal force" mode by using the "-f" flag.

Use the "ID"s or the "NAMES" of the containers that you want to delete, and perform the command below:

Great! The container is up and running. How can I access it?

During the Docker installation, by default, it's installed with three networks: "bridge," "none," and "host." Also, by default, it uses the "bridge" network for communication between the container and the host.

Docker lets you create a custom network, but it's beyond the scope of this article! Sorry. Lol.

Listing the configured networks at Docker:

Inspect the network configurations of the container that you want to access:

Right now, you will know the IP address and port of the container that you're trying to connect:

With the required information, we can test to see if the container is accessible:

Another way to get the same information in order to obtain the exposed container’s port is by using the “docker ps” command...

and with the “docker network inspect bridge” command, we get the container’s IP from the network that it’s connected to. In this case, the bridge network is the default network. Check it out below:

I'd like to modify or install something at the container only. Is it possible?

In my humble opinion, I think that the recommendation is to create your Docker image based on a "Dockerfile" that will be built with the "docker build" command, but sometimes, you just want to access a given container in order to customize it or be able to perform some commands there.

I'm used to verifying if the container has BASH or SH installed. If the answer is, "Yes," then I'll perform the following command:

I've tried many times to use the "docker attach" command, but I'm used to typing the "exit" command instead of pressing CTRL+P and CTRL+Q. At least, in this way, my container will keep running! 😜

Oh, no... is there an easier way to use Docker?

It is for our happiness, YES!!!

Also, we've got Docker Swarm that is a native cluster tool for Docker:

Both of them were created to help us manage multiple containers.

One more point: both support configuration files based on the "Docker Compose file" specification.

Let's create a YAML file that follows the Docker Compose specification to describe all containers that we want to be able to execute. As mentioned before, the same file can be used by both tools, but there are caveats: there are configuration features that are only supported by one tool instead of another one and vice-versa. Therefore, pay attention if you want to interoperate such a file.

Pay attention to the "sevices:db:ports" property: such property configures the ports that will be exposed. In my sample, it is defined that the 15432 port at the localhost will be redirected to the 5432 port of the "db" container (our postgres server).

The "services:adminer" property describes another container. It will be a client that will be used for us to access the Postgres server through the browser.

One interesting property is the "services:adminer:depends_on." It means that the "adminer" container will be started if and only if the "db" container is running.

I'm accustomed to using the Docker Compose tool. Then we will go ahead and show you basic commands to use it!

Starting the containers with Docker Compose:

A curious detail: the name of the current directory will be used as the prefix name of the containers and configurations described in the Docker Compose file.

Take a look below. I'm accessing the "adminer" container through my browser: 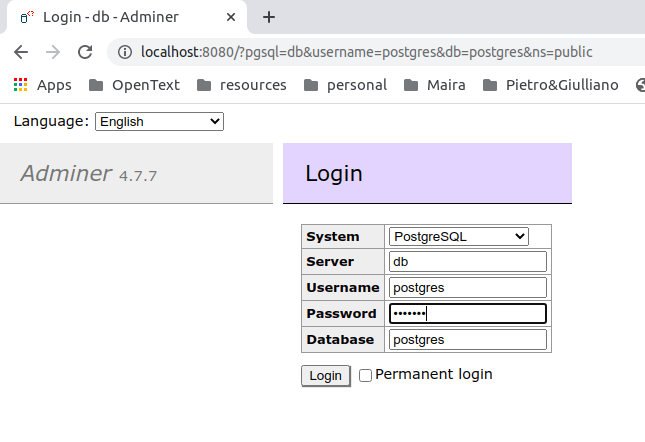 The command below stops and destroys all containers described in the configuration file:

I am very thankful for the opportunity to create this article, and I'd like to thank you, the reader, for coming this far! I am sorry for any misunderstandings!

Also, I'd like to thank my English teacher James Zarrello for helping me with this article translation. Thank you, James!

I'd like to pay attention to these commands because I'm using them every day, and I will be happy if you can provide me with any other good usage suggestions!

Indeed, Docker goes beyond the simple usage that I've described in this article. Docker has consolidated a standardization of the distribution of containerized solutions and solves many deployment issues like the famous one "in my machine works" and others in the cloud world.

Learning Docker in a thorough way is very worthwhile. There are many interesting points that this article didn't show for sure!

I hope you enjoyed this article! Looking forward to the feedback!

Once suspended, dearrudam will not be able to comment or publish posts until their suspension is removed.

Once unsuspended, dearrudam will be able to comment and publish posts again.

Once unpublished, all posts by dearrudam will become hidden and only accessible to themselves.

If dearrudam is not suspended, they can still re-publish their posts from their dashboard.

Once unpublished, this post will become invisible to the public and only accessible to Maximillian Arruda.

Thanks for keeping DEV Community 👩‍💻👨‍💻 safe. Here is what you can do to flag dearrudam:

Unflagging dearrudam will restore default visibility to their posts.