Recently , While Working on My Side Project , I thought why not authenticate the end user who is going to access my application with the help of various Social Network platforms such as Facebook and Twitter.

Many People who are reading this blog , will resonate with the fact that , it is so much easier to signup/login via social network platforms such as Facebook and Twitter , instead of manually going through this traditional process of filling in your E-mail Address , Your Name , then setting up a password. This traditional process takes up a lot of time.

That's why we have this savior for Developers , who want to provide their users with the comfort of , signing in/signing up to their web app with the Social Authentication Mechanism and that Savior is PassportJS.

PassportJS is basically a authentication middleware for NodeJS. The interesting fact about PassportJS is that , it can be integrated with any Express Based Web Application.

Let's dive into it and explore more about it

I am assuming that you are already familiar with the fundamentals of Express and NodeJS , therefore I will not go into the deep nitty gritties of every line of code , and I will focus mostly on explaining the concepts related to PassportJS

The Main thing to notice here is these two statements

Let's understand what we're doing in each of the above statements :

Now , comes the main deal where we will now purely deal with PassportJS.

Now , we have another file named auth.js , where we will now deal with the
Social Authentication Logic Using PassportJS

Let's start from*top-down* and see what we are trying to accomplish here:

Firstly , we have imported this package named as passport-facebook and while importing this package , we are invoking this Strategy Constructor Function. This statement basically goes into the passport-facebook module and imports the constructor function , which internally uses the OAuth 2.0 Module to provide authentication and login functionality to your Application.

This is basically the passport middleware function , here inside this middleware function , we are passing in a new instance of the FacebookStrategy Module.
(SideNote : If you are Familiar with Object Oriented Programming, you might be already familiar that in order to invoke constructor of a class automatically , we just create a new instance of that class. The Same thing we are doing here as well.)

Inside this new instance Of FacebookStrategy , we will pass two things as parameters , A Configuration Block which basically is providing access to the ApplicationID , SecretKey and a A Callback URL

This is the Configuration block that I am talking about :

You can do so by visiting *www.developers.facebook.com *

Next , it will show you a set of options asking you what purpose does your app serve 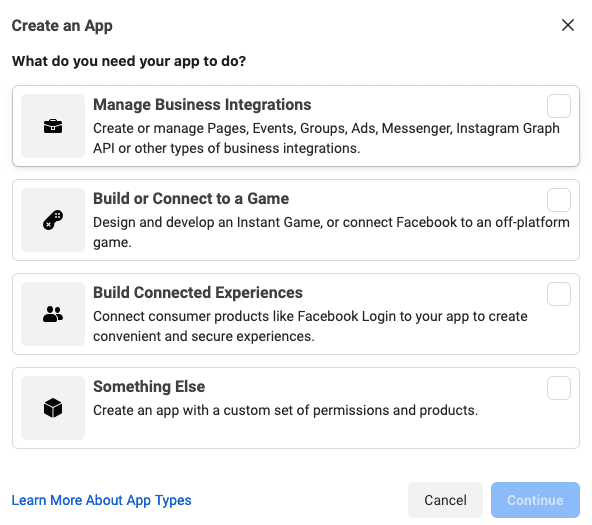 Since we are working on creating a Web App , Click on the Last Option and then proceed forward . Fill all the required details about your Web Application .

At last when everything gets completed , Go to Settings and then click on Basic.

This is the AppID and the App Secret Key that is provided by Facebook , so that you can use it's API , to proceed with the Social Authentication.(SideNote : It is advised that you should not share your SecretKey with anyone)

The profileFields property is basically an array of strings , and those strings represent what do we want to request back from the Facebook Server for our Application.

The Next Parameter inside this Passport Middleware is an Callback Function which has four Parameters :
AccessToken , RefreshToken , profile(A Profile Object) and done(A Method)

This Callback Function is technically known as the VerifyCallbackbecause its job is to find a User Profile in the local MongoDB Instance using the profile.id which refers to the UserID as sent by Facebook or any other Social Authentication Provider.

The AccessToken and RefreshToken are Provided by Facebook as a part of OAuth 2.0 Process.

The done() method gets the data out of the Authentication Pipeline and provides it to the requesting application.

Here is the code of the helper function users route , as i mentioned earlier :

That's all for this Part 1 of the Blog . In the Part 2 , I will continue the discussion further and there we will talk about Serializing and De serializing user data

I hope , I was able to provide some value with my content.
If you liked it , please share it with your Network .

You can connect with me through following platforms :

Deepanshu Arora
Everything about JWT(JSON Web Tokens) and why it is more powerful than the traditional Session Management ?
#node #webdev #career

Once suspended, deepansharora27 will not be able to comment or publish posts until their suspension is removed.

Once unsuspended, deepansharora27 will be able to comment and publish posts again.

Once unpublished, all posts by deepansharora27 will become hidden and only accessible to themselves.

If deepansharora27 is not suspended, they can still re-publish their posts from their dashboard.

Once unpublished, this post will become invisible to the public and only accessible to Deepanshu Arora .

Thanks for keeping DEV Community safe. Here is what you can do to flag deepansharora27:

Unflagging deepansharora27 will restore default visibility to their posts.