On the desktop, markdown-based notes can be taken in any plain-text editor of choice. If you're using Dendron, you can use VSCode/VSCodium as well as a suite of powerful commands to manage your notes. Though, what happens when you walk out the door? It turns out that your phone can work with markdown, too!

What we're looking at today: 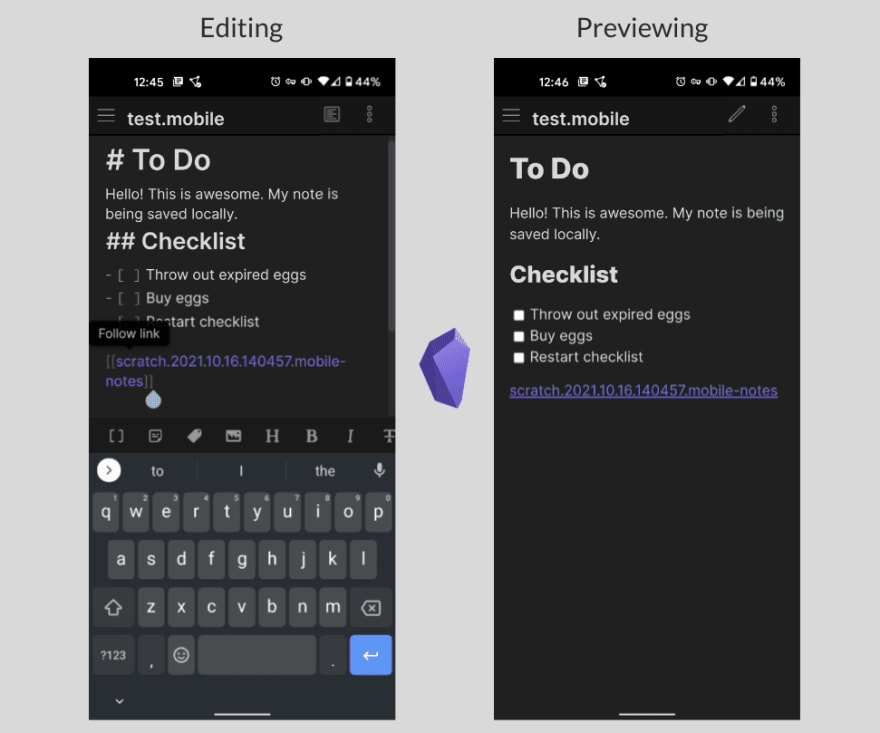 "Obsidian is a powerful knowledge base on top of a local folder of plain text Markdown files."

Obsidian is a PKM (Personal Knowledge Management) tool that provides a sleek UI to Markdown files. It had the best mobile experience, for me, out of the apps I tested. Though it doesn't have git support built-in, other mobile apps can assist in providing that backend. I recommend MGit (Android).

Obsidian uses wikilink style links (ex. [[my.other.note]]), like Dendron, which is a nice plus.

Paid options can assist note-takers with automatic syncing, publishing of notes, and other perks. Note that obsidian is free for personal use but requires at least a paid commercial license for business use. 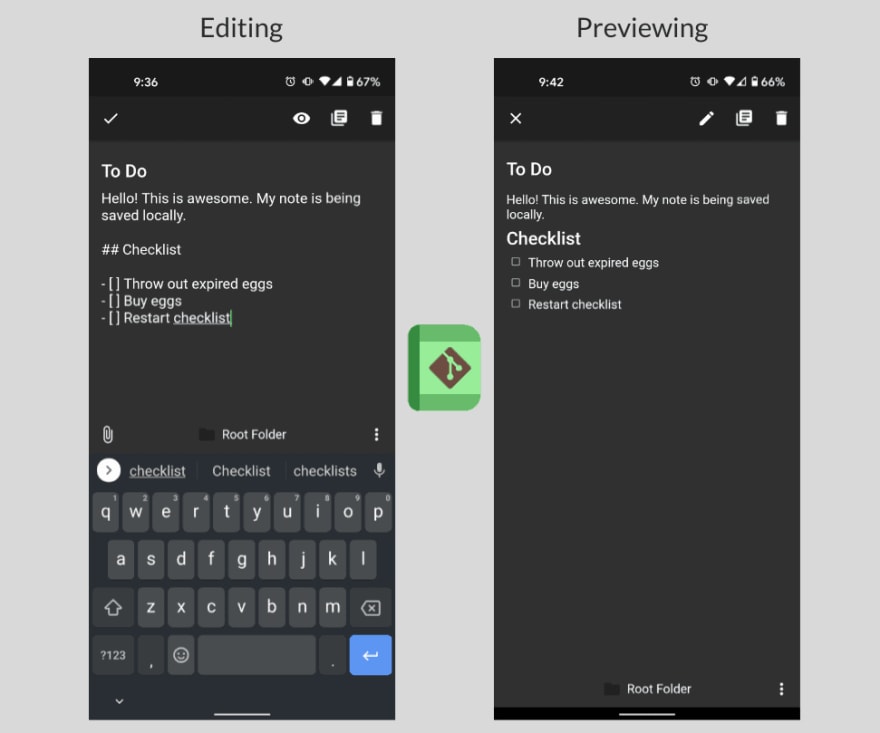 GitJournal has gained quite a bit of interest: it works on your mobile device of choice, free to jump into, open to contributions, and can sync notes to a repo (or multiple repos with the Pro version). The project is built with Flutter, making life easier when it comes to multiple-platforms as target exports.

GitJournal also supports wikilinks and can therefore be used with Dendron and Obsidian.

I'm really interested in seeing where GitJournal goes. I couldn't find other mobile apps that covered both notes in Markdown and git-integration, without needing to juggle multiple apps. With my Dendron vaults, I mostly take scratch notes or edit already-existing notes when using my phone. For more extensive usage, I hop on the laptop.

I will say, though, that I ran into so many problems in trying to get my first demo repository setup that I stopped using GitJournal. Other users are running into issues at the moment having to do with syncing and setup, some of which might be tied to a hardcoded expectation of branch names (such as master). I now use mgit for managing my repos, and Obsidian for managing notes. 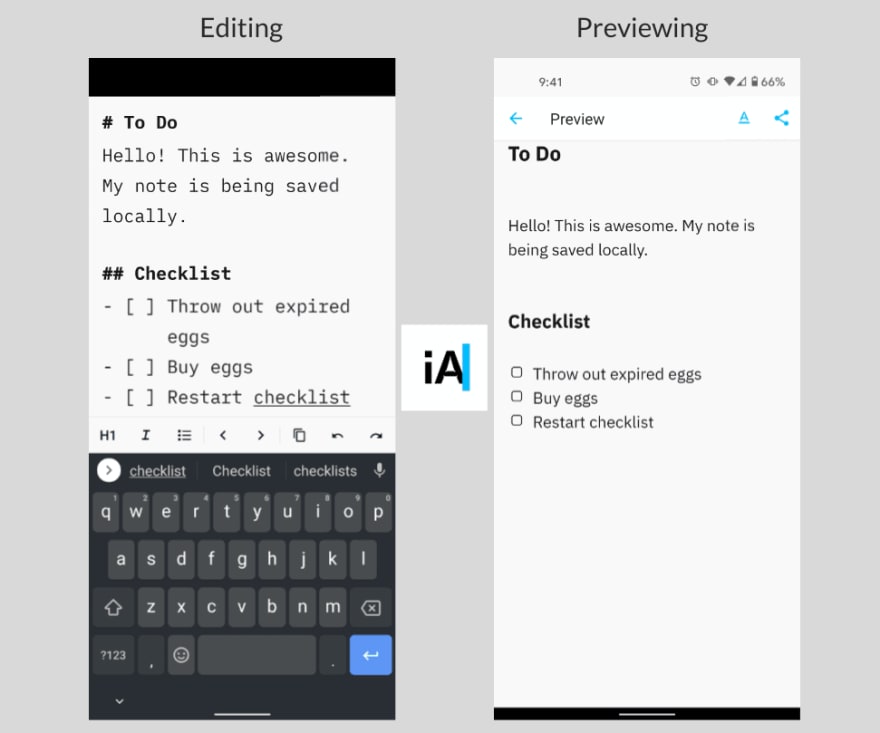 "iA Writer offers a unique writing experience that lets you concentrate and clarify your message. Used by half a million people worldwide, its powerful interface is crafted to cut out noise, let you focus on what you want to say, and help you structure and trim your text."

iA Writer was initially released 10 years ago, and has since evolved to work on multiple platforms. Though it doesn't have git integration, other apps like GitJournal or MGit (Android) can be used for that.

Want to feel like a designer, in a sleek interface with minimalist and Apple-like branding? This is made for you. The editor can work across all devices: phones, tablets, and desktops.

Being a feature-full piece of software, including: 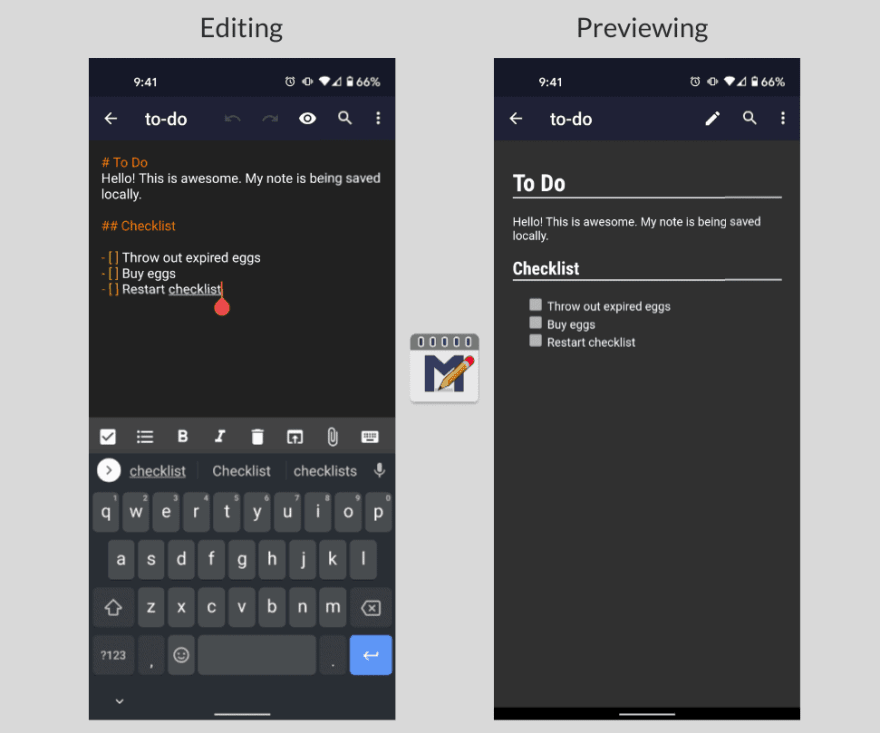 "Markor is a TextEditor for Android. This project aims to make an editor that is versatile, flexible, and lightweight. Markor utilizes simple markup formats like Markdown and todo.txt for note-taking and list management."

Markor is without git integration, but can be combined with an app like GitJournal or MGit (Android) for syncing to a source repo.

I liked both the editor and preview rendering in Markor more than the other apps I tried. Syntax highlighting is a nice touch while editing, and the previews look cleaner than both iA Writer and GitJournal.

Though, the cons here are that Markor only works on Android and needs another app to handle git integration. Outside of that, I can quickly see why thousands of ratings have led to nearly a 5/5 on the Google Play.

Other apps of interest

There are many mobile note-taking solutions that work with Markdown. Below are some additional tools that Dendrologists have used for markdown on the go.

Users may also be interested in future development around the GitHub mobile client, which currently does not support being able to edit or contribute new files. For now, people can use the app to post "LGTM" to PRs, add thumbs-down emojis to issues, and get notified when your PRs are rejected.

git is not the only way to sync/backup your notes, since tools like Dropbox, Google Drive, iCloud, and Keybase can also help provide that functionality. I, and other Dendrologists, have a bias toward git due to a variety of reasons:

If I had to choose what combinations to use, on Android, I'd recommend Obsidian with MGit (Android). The two, together, have worked very well for me. I'm also a fan of setting up SSH keys to have project/repo-limited permissions as Deploy Keys on GitHub (with Allow write access enabled). This prevents users from setting up SSH keys with user-wide permissions across GitHub.

Newsletters not your thing? You can also follow us elsewhere on the interwebs:

Interested in creating your own knowledge base using markdown, git, and VSCode? Get started with Dendron today.

Getting an Activity and a Fragment to Interact

How to Generate PDF from html in React Native

How To Create Avatar From Photo

Once suspended, dendron will not be able to comment or publish posts until their suspension is removed.

Once unsuspended, dendron will be able to comment and publish posts again.

Once unpublished, all posts by dendron will become hidden and only accessible to themselves.

If dendron is not suspended, they can still re-publish their posts from their dashboard.

Once unpublished, this post will become invisible to the public and only accessible to Derek Ardolf.

Thanks for keeping DEV Community 👩‍💻👨‍💻 safe. Here is what you can do to flag dendron:

Unflagging dendron will restore default visibility to their posts.