This is the first week that we came back from the study week. And we have our Lab 7 in this week. Lab 7 is not about coding new stuff or contributing on other people's repository. Lab 7 is about formatting the code we have from the SSG or I can say it is making it looks better.

Honestly, although this is not a complicated lab, it cost me a lot of time. And the reason for that was I got stuck at testing my code. After read over the instruction of the Lab 7, I started to watch the video that our professor provided. And I learned how effective prettier and eslint would be. I think these are pretty powerful tool for any programmers. It can help us keep a same formatting when we coding with a huge team project. Also, it would save us a lot of time since they are very good at finding those tiny mistakes.

My first difficulty was no matter how I modify my .prettierrc.json file, it keep showing me this error message:

And I had no idea how to fix it. I asked my friend, I googled it, or even I rewrite the code inside the .prettierrc.json file, none of them would work. And the my friend suggested me to delete the file and remake it. I didn't think that would work but I still give it a shot. Luckily, that solution worked! Although I don't know the reason for that, even up until now.

My second difficulty was testing my program after I added the code for prettier. I installed the prettier to my program, and I configured it. Also, I added a new "one-step" solution for running my formatter on the project from the command line. However, I got stuck at running prettier. Due to I'm new to this extension, and I didn't find the example from the materials that our professor provided. So I just tried whatever come to my mind. I tried npx prettier, I tried npm prettier server.js, I tried npx prettier server.js, and so on... But none of them could run. And finally, after 20 minutes trying, I typed npm run prettier, and it worked! And then I just commit my code through Git.

Lastly, when I set up my code for the eslint and try to run it. It returned my this error message: 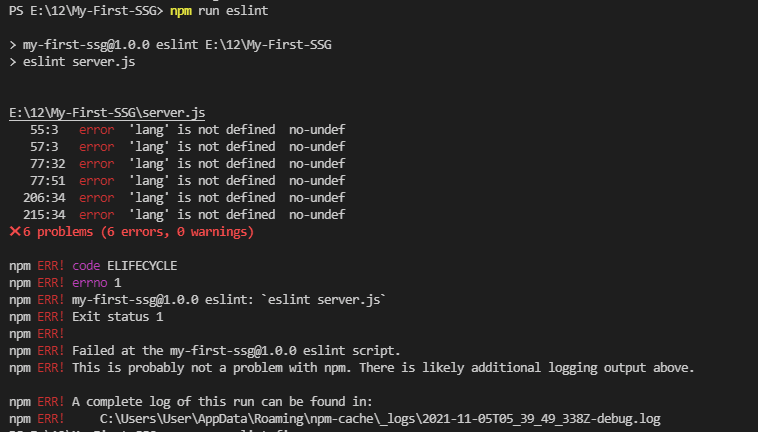 I don't think this is a complicated lab. It doesn't have a long instruction, or a long coding requirement. It's just about some small steps to add new extensions to my program. However, I do think this is a tricky lab. Because it's very strict about small stuffs. Sometimes maybe just one different letter would cause an issue, and it would cost you 10 - 30 minutes to fix it. Anyway, through this Lab 7, I got familiar to add the prettier and eslint to a JavaScript program!

Once suspended, derekjxy will not be able to comment or publish posts until their suspension is removed.

Once unsuspended, derekjxy will be able to comment and publish posts again.

Once unpublished, all posts by derekjxy will become hidden and only accessible to themselves.

If derekjxy is not suspended, they can still re-publish their posts from their dashboard.

Once unpublished, this post will become invisible to the public and only accessible to DerekJxy.

Thanks for keeping DEV Community 👩‍💻👨‍💻 safe. Here is what you can do to flag derekjxy:

Unflagging derekjxy will restore default visibility to their posts.