In this article, we will learn what and why React. We will also create our first React application.

Interactive websites need to update the DOM(Document Object Model) whenever a change happens. Compared to other libraries that manipulate the DOM, React uses a Virtual DOM (a lightweight copy of the actual DOM) that allow updating the part of the website that has changed and this increases the speed of updates.

How to use React

You can use react in two ways Adding react to your website or Creating react app.

React can be added to a website without any special tools and installations. But before that, we have to include the React library as two script tags to the head of the HTML Document

Next, we need to add another script, to enable the use of JSX.
JSX stands for JavaScript XML. JSX allows us to write HTML in React. JSX makes it easier to write and add HTML in React.

Facebook has created a tool called Create React App that makes it easy to set up a React project with a command!

Let's explore the structure of our project by opening it using a code editor.

Now, this is the project structure after creating react app. By default, it contains two directories public and src, a ReadMe.md file that contains how the app can be run, and other information about the app. It also contains a package,json, and package-lock.json file which contains the dependencies installed. 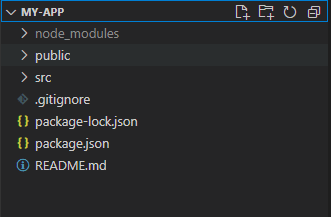 The public folder contains files related to how the application will display on the client, the most important of those being index.html, which is the HTML template of our page:

The src folder contains all of the JavaScript, CSS, and image files that will be compiled into a bundle file and injected into index.html 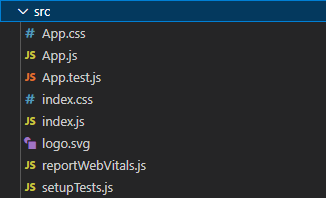 Although there are other files in the src folder that comes with Create React App when it is generated, the two files below are the only critical files:

How is React App compiled?

React uses a file loader. In the case of Create React App, Webpack is used to set up.
Webpack creates a "bundle" file containing the content of multiple files that need to be "bundled" together and it is all added together into a single file and injected into the index.html file for compilation.

Note : Webpack search for all CSS, JavaScript, and images in the src directory and create a bundle for them so they should always be in your src folder in case of Create React App.

Thank you for reading my blog. Feel free to subscribe to my email newsletter and connect on
LinkedIn
GitHub
Twitter

Once suspended, desmondowusudev will not be able to comment or publish posts until their suspension is removed.

Once unsuspended, desmondowusudev will be able to comment and publish posts again.

Once unpublished, all posts by desmondowusudev will become hidden and only accessible to themselves.

If desmondowusudev is not suspended, they can still re-publish their posts from their dashboard.

Once unpublished, this post will become invisible to the public and only accessible to Desmond Owusu Ansah.

Thanks for keeping DEV Community 👩‍💻👨‍💻 safe. Here is what you can do to flag desmondowusudev:

Unflagging desmondowusudev will restore default visibility to their posts.