All the React developers will agree, mostly everyone has used Jest at least once in their dev life.
Yes, It's true for me too. 👋

ReactJS team also suggested people use Jest to test their app. Which is fair as Jest was also created by Facebook. 👏

Jest is cool. But later they came up with something called Jest Snapshot testing. And as usual, they also suggested developers use it to test their React components.👏👏

Hm, it seems okay till now!

To play with this, I have created a simple CRA app which already has Jest installed with it. I have a component named Anchor.

Please note that THE is misspelled at this is hte beginning. We will come back here later.

I have a test spec file for this named Anchor.spec.js

If I run the command yarn test -u or npm run test -u, Jest will generate the snapshot file named Anchor.spec.js.snap inside __snapshots__ directory.

And also the Test will pass-

Wow! We, the developers, are happy. and let's deploy the code to PROD. 🎉

As I wrote above about THE was misspelled in our version 1. On the PROD, we found out it's a bug.
So let's fix it.

After fixing, our code is

And now if I run yarn test, the test is broken. The reason is it's trying to match with the right code to the old wrong snapshot and it thinks the test should pass. 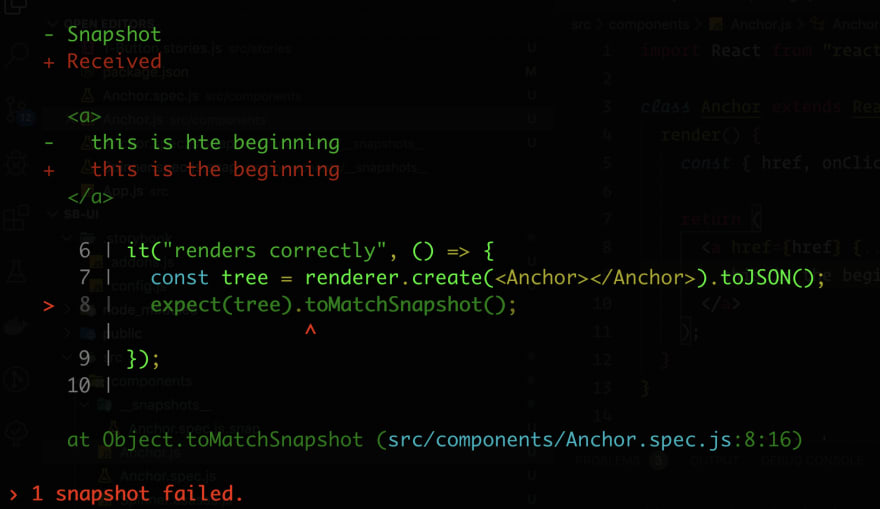 What? Is this crazy? I just fixed the Bug and made it right. And it's saying me your code is wrong!!! 😬

Now let's think of a large application where there are a lot of Components depend on other components. And if your requirements change quite frequently, then if you change one or more components your whole test can be measurably broken.
Even if you add one DIV to one component, the Test will fail.
😱

Yes, One can say/argue, it's better to see what's changed on the component. Yes exactly, and for that, we have GIT or any version management system where we can clearly see the differences. And When the PR reviewer will review your code, it will be clearly visible.

When the app grows and there are a lot of changes on the Components based on new requirements, the Test will fail and developers mostly update the snapshots blindly. Coz be honest, you will not go through failed tests and snapshots line by line when you know that the changes you did are for new requirements and all right. And after running the snapshots again, the PR will be really big for all the newly generated snapshot file changes. It's also a pain in the ass for the PR reviewer. 😟

Tomas(I found this on the web) says - You have become professional snapshot updater, congratulations! ⭐

And of course, you can not do TDD with this Snapshot testing.

A lot of people say we have 100% test coverage. And when they mean it they talk about Unit Testing mostly.

** Unit testing is not enough!

Even after having 100% Unit test coverage( build time), the app can be completely broken in runtime! 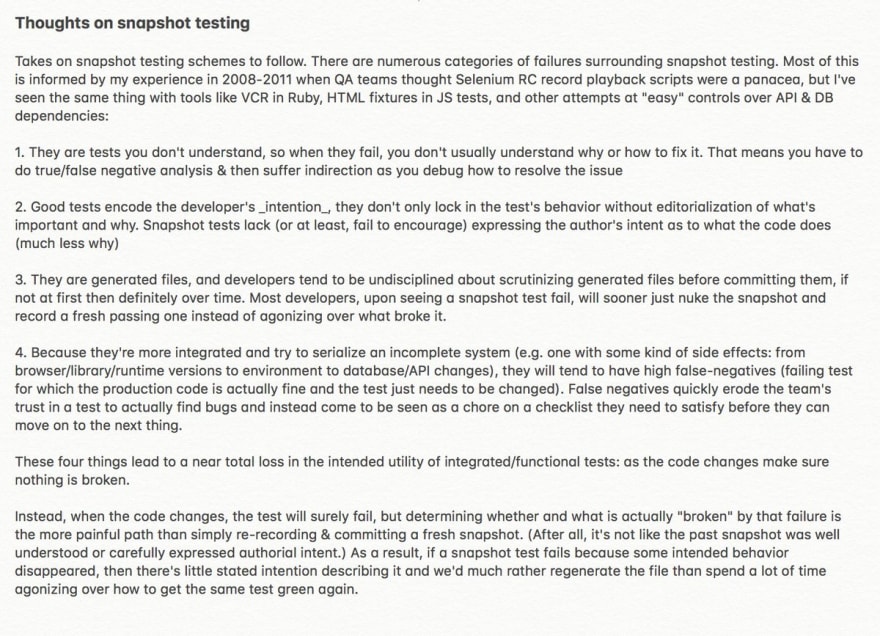 I 👎'd snapshot testing yesterday. Someone DM'd (not @'d!) me a question so here's my response to why. I'll blog soon twitter.com/searls/status/…
Justin Searls @searls
Enzyme and snapshot testing is generally a bad idea. Don't @ me.

@WickyNilliams I don’t even think unit tests are defined. Wtf is a unit?!

I will write more on this testing related stuff!

As I am trying to contribute contents on the Web, you can buy me a coffee for my hours spent on all of these ❤️😊🌸

Once suspended, destro_mas will not be able to comment or publish posts until their suspension is removed.

Once unsuspended, destro_mas will be able to comment and publish posts again.

Once unpublished, all posts by destro_mas will become hidden and only accessible to themselves.

If destro_mas is not suspended, they can still re-publish their posts from their dashboard.

Once unpublished, this post will become invisible to the public and only accessible to Shahjada Talukdar.

Thanks for keeping DEV Community 👩‍💻👨‍💻 safe. Here is what you can do to flag destro_mas:

Unflagging destro_mas will restore default visibility to their posts.