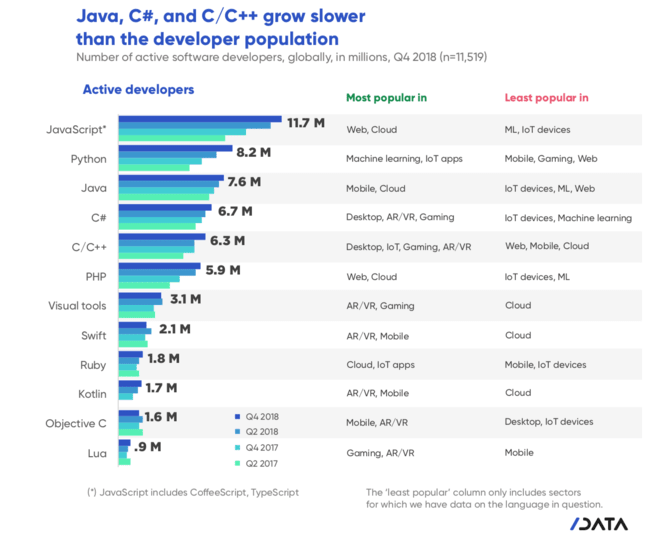 It can be hard to assess how widely used a programming language is. The indices available from players like Tiobe, Redmonk, Stack Overflow’s yearly survey, or Github’s Octoverse are great, but mostly offer only relative comparisons between languages, providing no sense of the absolute size of each community. They may also be biased geographically, or skewed towards certain fields of software development, or open source developers.

The estimates we present here look at active software developers using each programming language, across the globe and across all kinds of programmers. They are based on two pieces of data. First, our independent estimate of the global number of software developers, which we published for the first time in 2017. Second, our large-scale, low-bias surveys which reach more than 20,000 developers every six months. In the survey, we consistently ask developers about their use of programming languages across nine areas of development1, giving us rich and reliable information about who uses each language and in which context.

JavaScript is and remains the queen of programming languages. Its community of 11.7M developers is the largest of all languages. In 2018, 2.5M developers joined the community: the highest growth in absolute numbers and more than the entire population of Swift, Ruby, or Kotlin developers, amongst others. New developers see it as an attractive entry-level language, but also existing developers are adding it to their skillset. Even in software sectors where Javascript is least popular like machine learning or on-device code in IoT, over a quarter of developers use it for their projects.

Java (7.6M active developers), C# (6.7M), and C/C++ (6.3M) are fairly close together in terms of community size and are certainly well-established languages. However, all three are now growing at a slower rate than the general developer population. While they are not exactly stagnating, they are no longer the first languages that (new) developers look to.

Java is very popular in the mobile ecosystem and its offshoots (Android), but not for IoT devices. C# is a core part of the Microsoft ecosystem. Throughout our research, we see a consistent correlation between the use of C# and the use of Microsoft developer products. It’s no surprise to see desktop and AR/VR (Hololens) as areas where C# is popular. C/C++ is a core language family for game engines and in IoT, where performance and low-level access matter (AR/VR exists on the boundary between games and IoT).

PHP is now the second most popular language for web development and the fifth most popular language overall, with 5.9M developers. Like Python, it’s growing significantly faster than the overall developer population, having added 32% more developers to its ranks in 2018. Despite having (arguably) a somewhat bad reputation, the fact that PHP is easy to learn and widely deployed still propels it forward as a major language for the modern Internet.

The fastest growing language community in percentage terms is Kotlin. It grew by 58% in 2018 from 1.1M to 1.7M developers. Since Google has made Kotlin a first-class language for Android development, we can expect this growth to continue, in a similar way to how Swift overtook Objective-C for iOS development.

Other niche languages don’t seem to be adding many developers, if any. Swift and Objective-C are important languages to the Apple community, but are stable in terms of the number of developers that use them. Ruby and Lua are not growing their communities quickly either.

Older and more popular programming languages have vocal critics, while new, exciting languages often have enthusiastic supporters. This data would suggest that it’s not easy for new languages to grow beyond their niche and become the next big thing. What does this mean for the future of these languages and others like Go or Scala? We will certainly keep tracking this evolution and plan to keep you informed.

The Developer Economics survey is now Live.
Have your say in which should be the next programming language Queen and you may win amazing prizes and gear. Discover more.

How to Self Host your own Website Analytics With Umami

Developer Nation
Our mission is to champion a global collective of software creators who are confident in their technology choices and feel included in the conversation about the future of the ecosystem.
5.2M Developers Joined the Javascript Community in the Last Two Years
#javascript #languages #php #python
JavaScript is growing, web platforms and web standards are constantly changing. What are the biggest challenges?
#webdev #javascript #survey
Size of Programming Language Communities in Q3 2021
#analysis #javascript #rust #kotlin

Once unpublished, this post will become invisible to the public and only accessible to Developer Economics.

Thanks for keeping DEV Community safe. Here is what you can do to flag developernation: