In the nearly fifteen years since Amazon AWS cracked open the cloud market by releasing S3 – and changed the world by doing so – there has been huge growth in the variety of cloud solutions available for developers to use. We examine the different reasons that developers give for adopting or rejecting cloud technologies. The findings shared in this post are based on the Developer Economics survey 19th edition which ran during June-August 2020 and reached more than 17,000 developers in 159 countries.

In second position, with 45% of cloud developers using this technology, Database-as-a-Service (DBaaS) is also very widely used, and data storage and retrieval will continue to be an important issue, albeit in a much more sophisticated form than S3 originally offered. Cloud Platform-as-a-Service (PaaS) sits in a distant third place. A third of backend developers are using PaaS, putting this technology slightly ahead of the other ones we ask about – between 21-27% of developers use them. 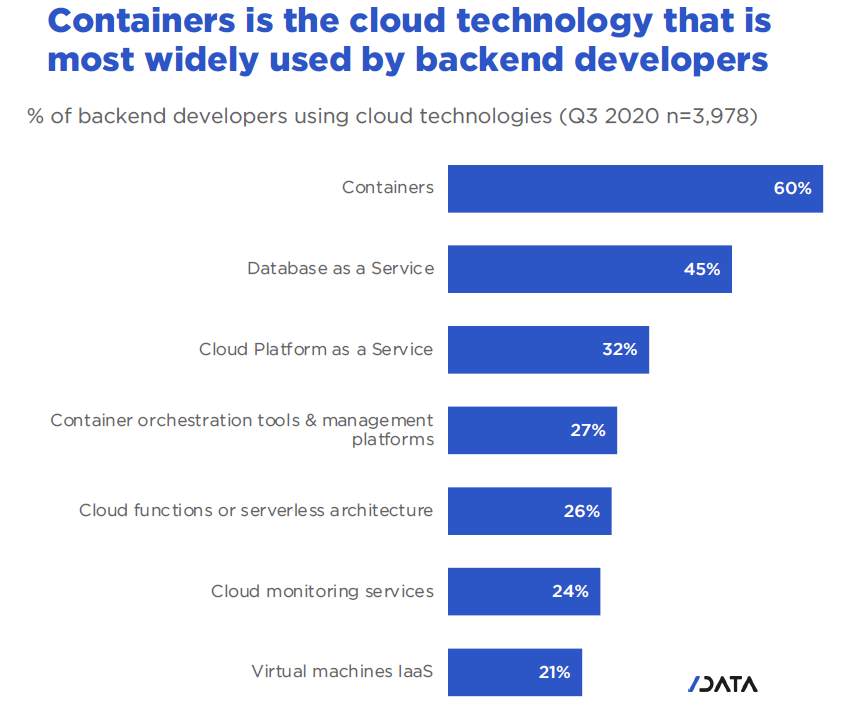 Abstraction and simplification are two of the main drivers for the mass adoption of cloud technologies, but we can’t overlook the role that flexibility plays. Spinning up instances to cope with variable demand, creating temporary testing environments, and adding storage as required is immensely powerful. But one often-overlooked aspect of this flexibility is that developers and organisations have the flexibility to choose. They are not restricted to the expensive, bare metal they bought ten years ago, and they are less constrained by monolithic purchasing processes, because, to put it simply, these decisions matter less. In a world where infrastructure can be provisioned and destroyed at will, and where data and server configurations can be transferred easily between homogeneous systems, cloud providers have to find other areas of differentiation in order to compete. Vendor lock-in is much less of an issue for users than it once was, and the rise of the developer as a decision-maker has put even more power into their hands. Note the adoption and rejection reasons for DBaaS and orchestration platforms come from our previous survey, fielded in Q1 2020.

“Pricing and support/documentation are most important to developers”

For every cloud technology, with the exception of orchestration tools, pricing and support/documentation are the two most important factors that developers consider when adopting that technology. For the most part, these two factors switch between first and second place, however, pricing drops to fifth place for developers considering adopting an orchestration tool, whereas support/documentation remains at the top by a large margin. Around three in ten of these developers selected ease and speed of development (32%), integration with other systems (31%), community (30%), and pricing (29%) as reasons for adoption, with pricing being around 15 percentage points lower for orchestration tools than for other technologies. On the other hand, community and scalability are generally more important for developers selecting an orchestration tool.

Much of this distinction is driven by the dominance of Kubernetes. With 57% of backend developers who are using an orchestration tool choosing Kubernetes, it is the single most popular orchestration tool, and importantly, it’s free and open source. It stands to reason, therefore, that pricing is simply not an issue for developers using Kubernetes, instead they value the community support that helps them master such a complex tool.

Indeed, as well as pricing being much less important for these developers, the learning curve is also less important. It seems that these developers understand that they are dealing with high levels of complexity and abstraction and accept that there is a lot to learn in this space. But for those developers that want the abstraction and simplicity offered by a commercial container management system, many paid options exist, and pricing is still an important factor in this space. 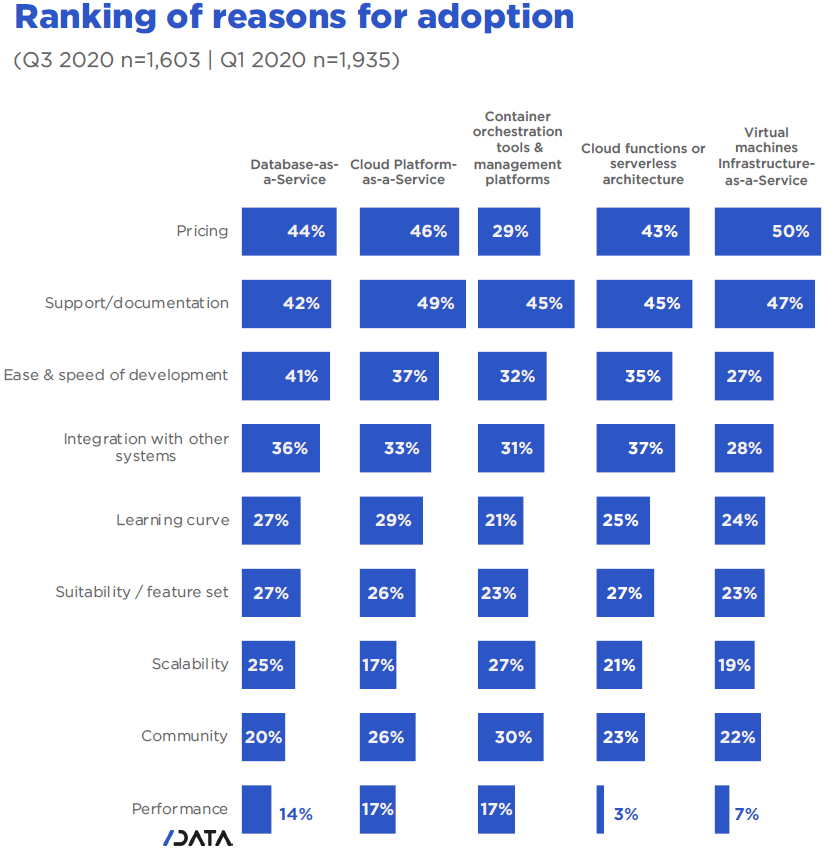 Taking developers’ reasons for rejection into account let us view the decision-making process from the other side. Immediately, we see that pricing is the dominant factor when rejecting every technology. Taking a closer look at the data shows the true extent of this – for DBaaS and Infrastructure-as-a-Service (IaaS), developers were more than twice as likely to select pricing as a rejection reason than the second- and third-placed reasons of support/documentation, and the learning curve, respectively. Amongst the remaining technologies, the smallest difference was 8 percentage points, for developers rejecting orchestration tools.

Further down the list, there is a lot of variability between the different technologies. For example, the learning curve was the second most popular rejection reason for developers choosing IaaS, with a quarter of them doing so. This suggests that the learning curve for IaaS is quite steep and that this is a barrier for many developers. This is not the case for DBaaS however, where only 15% of developers stated this as a reason for rejection.

Suitability and feature set has middling importance for developers choosing to adopt a technology, but for many technologies, it is a more important reason for rejection. This shows that suitability and feature set is a hygiene factor – there are relatively few cases where this is of paramount importance, but many where a technology does not meet the needs and is therefore rejected.

Finally, performance sits very low in the hierarchy for developers adopting and rejecting cloud solutions. This indicates that, for the vast majority of uses cases, the range of performance options provided by vendors is sufficient. This suggests that many cloud computing products are, to some extent, homogenous, and that developers are more concerned with the ‘soft’ features, such as support/documentation, community, or learning curve. These features make for a fulfilling development experience, and in the age of the developer as a decision-maker, experience is everything. 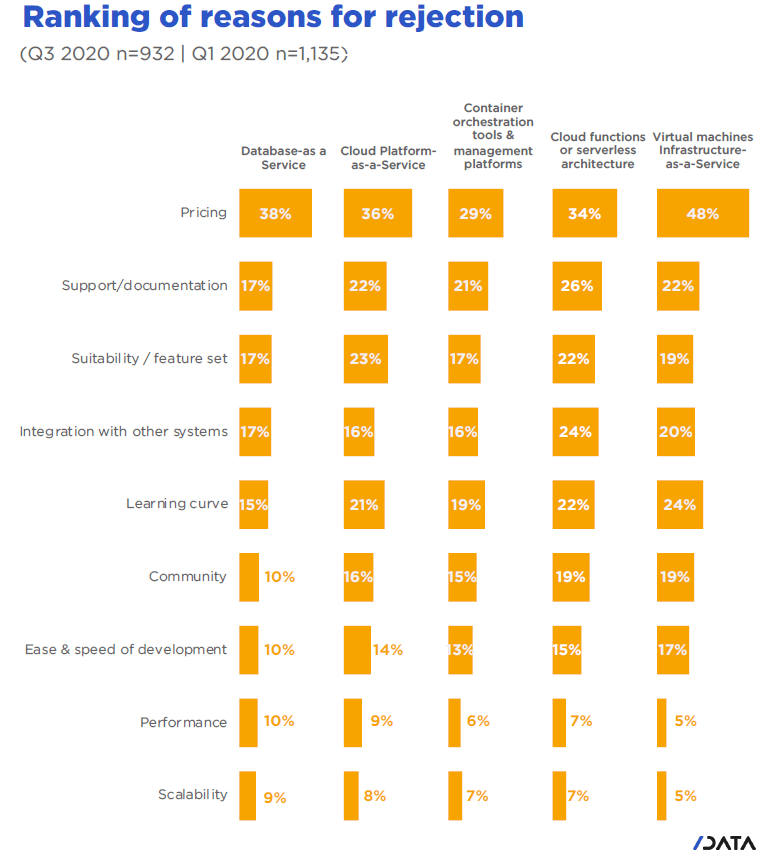 What are your reasons for adopting or rejecting cloud technologies? We'd love to hear your thoughts.

You can also let us know your reasons here!

Developer Nation
Our mission is to champion a global collective of software creators who are confident in their technology choices and feel included in the conversation about the future of the ecosystem.
Take our Backend, Mobile, Web and Desktop developer survey this week and win $100 USD Amazon gift card
#mobile #programming #developer #backend
How to become a web3 developer plus news from Windows 11, Firefox 99 and more!
#devnews #webdev #backend
Top Linux command link tips, documenting accessibility, podcasts and more.
#devnews #webdev #backend