Ever considered becoming an SRE, if you’re looking forward to playing a challenging yet in-demand role in the DevOps space. SRE or Site Reliability Engineering was a term coined first at Google in 2003 by Benjamin Treynor Sloss, VP of engineering at Google, way before the DevOps. Site Reliability Engineering creates a bridge between development & operations by applying a software engineering mindset to system administration topics.

Eventually, SRE has became a full-fledged IT profile, which aims at building automated solutions for operations team such as on-call monitoring, performance and capacity planning, and backup and disaster recovery plan. However at its core, SRE is an implementation of the DevOps paradigm.

So in this post we have tried outlining What is SRE, its key benefits, and also what is the current demand and potential future for the SRE role.

If we consider the traditional definition of DevOps – it is an environment where the development (devs) and operation (ops) work altogether intending to be able to release software faster at great stability.

“Site reliability engineers create a bridge between development and operations by applying a software engineering mindset to system administration topics.” 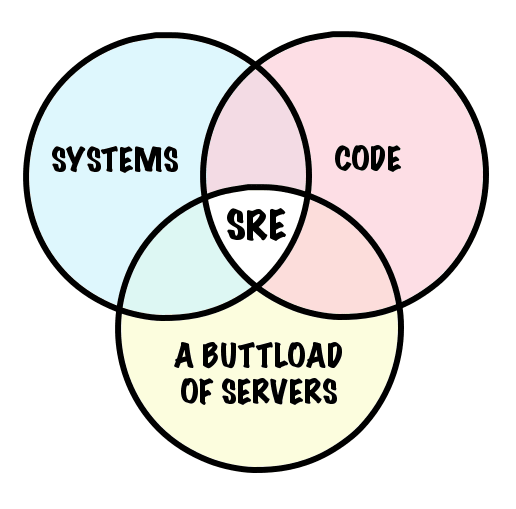 SRE as a career- What does a Site Reliability Engineer do?

A Site Reliability Engineer works with operation along with developing systems & software that help to increase site reliability & performance.

So, the ultimate goal of SRE is to automate their way out of a job, as per Google. Google gives a lot of emphasis on SREs to not spend more than 50% of their time on operations & consider any violation of this rule as a sign of system ill-health. As long as you have a strong foundation in software or system engineering, you can consider becoming an SRE.

It is also essential to have a strong incentive for improving & automation. System engineers who want to improve their programming skills & software engineers who want to learn how to manage large-scale systems are perfect candidates for the role of an SRE. This role will allow you to gain a system-wide view.

The role of the SRE can be fun & exciting when the application architecture & technology decisions allow for scalable stateless solutions. Moreover, you can be updated with the latest trends in the DevOps world. It’s a great way to expand your knowledge & skills in high-demand areas like continuous delivery, infrastructure automation & release engineering. This role is extremely creative, stimulating & technically challenging.

How has the SRE role evolved in the last few years?

Twenty years ago, we did not have multiple regions, each containing hundreds of thousands of physical as well as virtual machines. There were no thousands of microservices creating complex software. No service dependency chains were working on a reliable network & hardware working with third-party providers, APIs & vendors.

Now, we need a way to manage these complexities at a faster pace. Google was the first company to really start operating at an internal scale. They created the concept of a new type of engineering to help manage this complexity & ensure reliability. This engineer is called an SRE. But SREs certainly have existed for decades in many different forms. For example, disaster recovery and production testers.

The demand for SREs grew as companies went on to try cloud-native. SREs were required to work in production & operations, with a focus on automation & observability. As the systems became distributed, this role has evolved with time. The role of an SRE evolved from just shoring up uptime to a relationship broker who has viewed into the organization, wide systems & problem-solving. As the demand grows, SREs become those people who can work across the company.

An SRE is someone good at communication as well as prioritization. Site Reliability Engineering is an offshoot of the DevOps culture. SRE is focused on the external value the company can reliably offer customers. While DevOps is more about internally increasing velocity. In conclusion, SRE has been around since forever, but certainly, it’s growing and in-demand. Any size organization can benefit from a good SRE and service level objectives.

The current demand for SRE

An SRE is expected to juggle between networking, security, system administration, hardware & anything else that could possibly make your infrastructure unstable. Hence a SRE can also be called DevOps specialist.

A SRE should know about both software development & system infrastructure. They are in charge of making sure that the website & applications are loading, which is highly critical.

SREs rank in the top three of the ones NOT actively looking for a job. SRE professionals are among the most wanted in the tech industry. 33% of IT leaders are having a hard time hiring a good SRE. SREs are 30 times more likely to be men than women. But there are more women than men in this field.

SREs are typically found at high-performing tech companies that have large data centers & complex technical challenges. Their roles can be inspiring from both a financial & workplace culture perspective. SREs are ruling the tech world & more of them are highly in demand.

Site Reliability Engineers have a great & promising future. SRE is one of the most buzzed skills in the IT industry. With automation & observability becoming a key feature for more efficient & rapid deployment, an SRE job profile will be one of the most demanding in the coming years.

The post-pandemic environment has resulted in a major shift in where SREs will be located. 50% of SREs will be working remotely post covid-19, as compared to only 19% before the pandemic. Moreover, the SRE concept has been embraced by major internet companies like DropBox, Netflix & Airbnb.

The SRE community now even has its conference called SREcon. While we await the milestone, it’s not too soon to consider the implications of the SRE discipline in each & every organization.

So you too can make a career shift into an SRE role, regardless of your background in software engineering, as long as you have solid foundations in it and a strong passion for improving and automating the systems around you.

If you are a Systems engineer and want to work on your programming skills, or if you are a Software guy and want to learn about working with large-scale systems, this SRE profile is apt for you. Deepening your knowledge in both areas will give you a competitive edge and more flexibility for the future.

Interested in helping us solidify our infrastructure and scale DEV and other communities hosted on Forem? 🤔

DevopsCurry
DevopsCurry is an online Digital Tech platform focussed on Cloud and DevOps technologies. It provides content related to the latest news, developments, technologies and tools in the Devops domain
How to pick the best Cloud Partner for your business in 2021
#devops #cloud #aws #azure
Adopting Open-source in 2021 for Devops success
#devops #opensource #cloud #aws
Roles and Responsibilities of a DevOps Professional
#devops #aws #cloud #azure

Once suspended, devopscurry will not be able to comment or publish posts until their suspension is removed.

Once unsuspended, devopscurry will be able to comment and publish posts again.

Once unpublished, all posts by devopscurry will become hidden and only accessible to themselves.

If devopscurry is not suspended, they can still re-publish their posts from their dashboard.

Once unpublished, this post will become invisible to the public and only accessible to DevopsCurry.

Thanks for keeping DEV Community 👩‍💻👨‍💻 safe. Here is what you can do to flag devopscurry:

Unflagging devopscurry will restore default visibility to their posts.