This post will talk about DevOps and Continuous Integration / Continuous Delivery to bring new products and services faster to market.

DevOps is a set of practices intended to reduce the time between committing a change to a system and the change being placed into normal production, while ensuring high quality.

DevOps is intended to be cross-functional mode of working, which uses wide variety of toolset that fits into one of the below category.

As we have seen in cloud-native series, cloud-native systems embrace microservices, containers, and modern system design to achieve speed and agility. But that's part of the story. How do we provision cloud environment? How do we rapidly deploy new features and updates? That's where DevOps Automation comes into picture - Infrastructure Automation and Deployment automation.

This is popularly known as Infrastructure as Code (IaC), it enables to declaratively script and provision the required cloud infrastructure.

Terraform, Azure ARM and AWS Cloudformation are such IaC tools, and terraform is widely used.

12-factor app principles discussed earlier in first part of this blog series mentions about principle 5 - Each release must enforce a strict separation across the build, release and run stages. Each should be tagged with a unique ID and support the ability to roll back.

And finally, the released feature is run in the target execution environment. Releases are immutable meaning that any change must create a new release.

Azure DevOps is one-stop solution for all DevOps and agile needs for embracing automation. All other public cloud providers offer parallel tools for DevOps and CI/ CD. 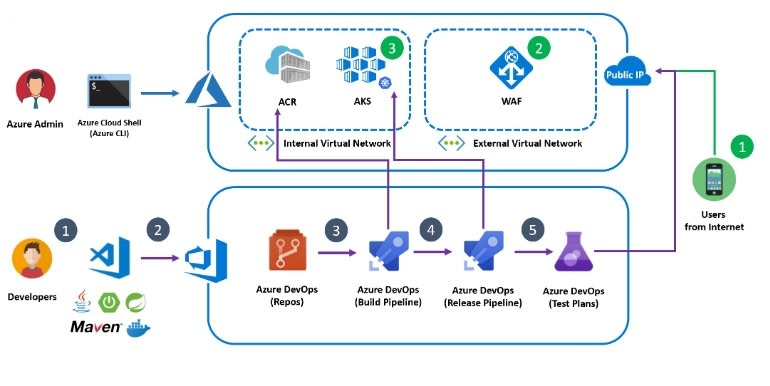 By adopting DevOps culture in organizations and using automation mentioned above, Organizations have achieved significantly faster time to market. Moved from one in a quarter release to on-demand updates or at least per week / per sprint release cycle. The goal is to release frequently, gather feedback and fail-fast early in the development cycle, when it is less expensive to improvise / fix. CI/ CD practices allows better collaboration across teams and software quality, as it automates mundane, repeated tasks. DevOps adoption is key for achieving high performance across organization as it lets teams focus efforts on building important business features and bring growth.

I hope you enjoyed reading this cloud-native series and learnt something new. Cloud-native application empowers digital disruption to brings better products and services to market - with quality and speed.

Disclaimer - This post is my personal opinion and does not reflect those of any of my past, present or future employers or affiliations.

Once suspended, dhruvesh_patel will not be able to comment or publish posts until their suspension is removed.

Once unsuspended, dhruvesh_patel will be able to comment and publish posts again.

Once unpublished, all posts by dhruvesh_patel will become hidden and only accessible to themselves.

If dhruvesh_patel is not suspended, they can still re-publish their posts from their dashboard.

Once unpublished, this post will become invisible to the public and only accessible to Dhruvesh Patel.

Thanks for keeping DEV Community 👩‍💻👨‍💻 safe. Here is what you can do to flag dhruvesh_patel:

Unflagging dhruvesh_patel will restore default visibility to their posts.