We, as Javascript developers need to use libraries in our day to day, it simplifies our work a lot. Nowadays we mostly do it in this way:

Will not all the unused library's code end up on the final bundle making my application unnecessary heavier?

Today you will learn how to improve your bundle size just by changing the way you import. After this, you are going to be able to detect a simple optimization opportunity for your bundle!

Verify if the library has support for ES6 and you can import freely, you will get always the best result 🙆‍♂️. If it doesn't ⚠️, you need to import using cherry-picking.

Can we import as we want without consequences?

When we compile our front-end apps, there is a process that Webpack applies called Tree Shaking. Basically, is code elimination, the code that is not being used by anyone. This process prevents having dead code in our final bundle, making it lighter and the application is going to load faster for our users!

So, thanks to Tree Shaking I'm excused and I can import however I want and all the unused code imported from the library will be removed automagically?

Is not always the case

There is a scenario when Tree Shaking is not going to be able to detect what is dead code having as consequence to remove nothing.

ECMAScript 2015(aka ES6) Module Syntax; it sounds complex, but it's something really popular nowadays. It's just a syntax to import a JS module, it looks like this:

When you are using a library that has ES6 Module Syntax compatibility, you don't need to worry, import as will, Tree Shaking have you covered 😉. In fact, is the only module syntax that Tree Shaking supports, let's take a look at the documentation:

Tree shaking is a term commonly used in the JavaScript context for dead-code elimination. It relies on the static structure of ES2015 module syntax, i.e. import and export...

If you are completely new about 👉 JS Modules

A library can be delivered (packaged) with other module systems different than ES6, even though if its source code uses ES6 module syntax, a compilation process could be implemented to only support CommonJS for example. The projects written using pure JS (with no transpilation process (Babel, TypeScript)) that uses the CommonJs module system is another example.

So, no ES6 module syntax present = no Tree Shaking. The only way to have a healthy bundle when dealing with libraries with no ES6 is importing using a technique called cherry-picking, you need to specify the absolute path to the file that contains the info needed.

Having the theory learned I decided to prove all this. What I did was create some libraries with different module support, create several front-end apps on React and Angular1 to test if Tree Shaking really does its job.

Only small is going to be use at all time, so if big sneaks into the final bundle we are going to notice it on sight!. 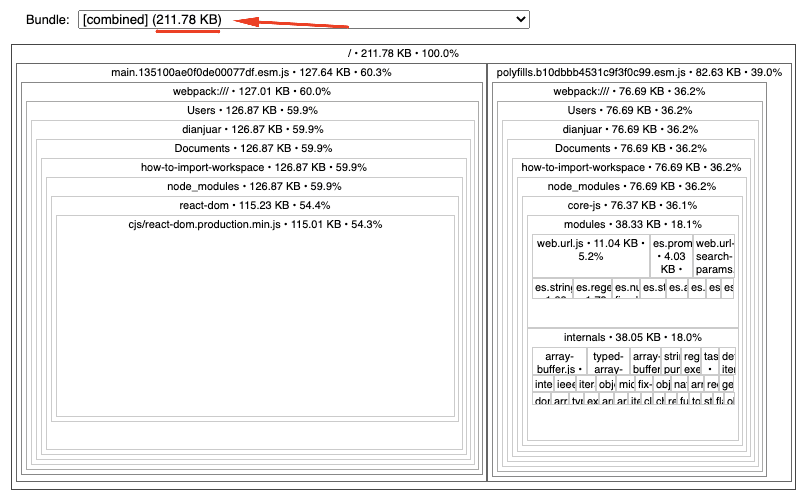 The smelly one! You can notice a big white box that represents big and represents 96.7% of the application size: 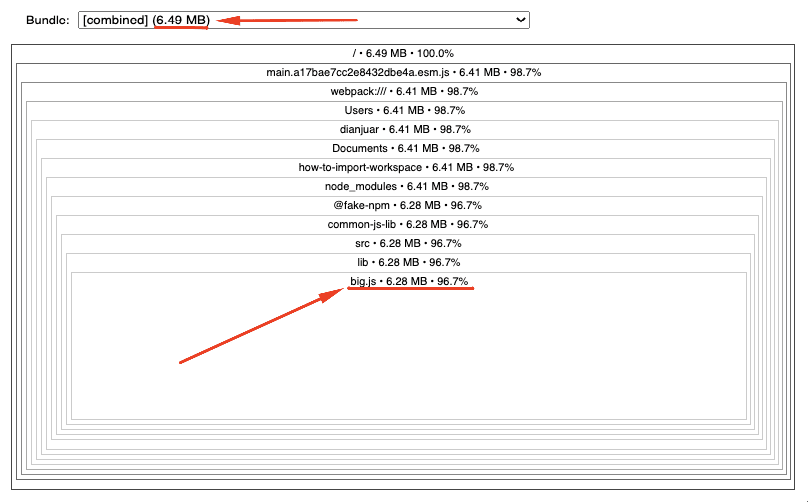 The results were as expected, if your library has to offer ES6 module syntax, Tree Shaking will do its job. If not, cherry-picking was the only way to get a healthy bundle.

Here is the repo if you are curious dianjuar/how-to-import. All this was created in a Monorepo using Nx, the library's npm publishing was mocked using yalc. The bundle analysis was made using source-map-explorer.

Also, I wanted to make this test with popular libraries, so this is what I got, importing as import { whatINeed } from 'popular-lib'

Along with this experiment, I was using the VsCode extension Import Cost and was precise along with the result. With the extension, you will be able to see right away how much an import will cost to the bundle. It will not tell you when you are getting a healthy or smelly bundle, but you can tell when an import cost is sus.

Gif extracted from the README of Cost Import

Tree Shaking have you covered! You can import however you want and you will be getting a healthy bundle if and only if the library has support for ES6 Module Syntax (import and export).

You can make your bundle unnecessary heavy if you don't cherry-pick the imports on libraries without ES6 module support, like lodash.

Import Cost can help you to spot an import that needs some refinement.

Once suspended, dianjuar will not be able to comment or publish posts until their suspension is removed.

Once unsuspended, dianjuar will be able to comment and publish posts again.

Once unpublished, all posts by dianjuar will become hidden and only accessible to themselves.

If dianjuar is not suspended, they can still re-publish their posts from their dashboard.

Once unpublished, this post will become invisible to the public and only accessible to Diego Juliao.

Thanks for keeping DEV Community 👩‍💻👨‍💻 safe. Here is what you can do to flag dianjuar:

Unflagging dianjuar will restore default visibility to their posts.