Regex is the thing that you only learn when you need it. Unless you are processing a considerable amount of data, you likely won’t use it.

Does that imply that, as a software engineer, we should forget about it and worry about it when that time comes? Are we not supposed to take responsibility to learn it?

Programmers think that Regex is hard. As with every skill, it requires practice to master. To help you with it, I wrote this article to cover the basics of Regex and show a simple application of how you can use it.

Stuck in limbo, googling about the Regex pattern to the problem we are trying to solve. Does this sound familiar? I bet at least one of you were in a comparable situation before. But, don't you think it would be easier to know the in and out of Regex? Indeed, this would have reduced the time searching for answers.

Regex provides a more concise way of solving problems that need some form of parsing. An example is the split function. Turning your string into tokens before applying some sort of logic is lengthy to put in place. Turnouts that this implementation is limited compared to using Regex.

Hopefully, the next part excites you as we are going to cover more of Regex.

Regex is also called regulation expression. It is a set of string characters that define an expression for the patterns of data you are looking for. It has been there for a long time, since the 1980s, and its primary use was for searching and parsing strings.

Don't worry if it does not make sense now. In the next part I will cover what the characters in the above expression mean.

Regex structure and special characters
The first thing to know is that there are two ways to define a Regex pattern:
Using a regular string literal

When to use which? Regular string literal is when you know the pattern in advance. Contrarily, RegExp constructor when you use dynamic data during runtime.

Special characters in Regex extend the ability to create more complex Regex pattern. Let's look at some fundamental ones.

The string, "From: dinys18@dinmon.tech", will be used in each of the below scenarios. And to give the result of the Regex pattern, an arrow will be used. But in no way this will work using JavaScript.

^ - The caret symbol matches the start of a string

$ - The dollar sign symbol matches the end of a string

[0-9] - Character set. Matches any character enclosed with the brackets.

* - Asterisk character matches any character before it, at least one, i.e., either zero or one.

+ - Plus sign character matches any character before it, one or more times.

Now that we have covered various ways to construct a regular expression let's go ahead and combined it with JavaScript. That will allow us to perform more complex operations like extraction, replacement and so forth.

In this section I will cover how to use Regex combined with JavaScript to perform an extraction onto a string. For that, I will implement a file simulator that allows the creation of duplicate folder names.

So to avoid duplicate folder name, we need to append a string to the folder name to make the new folder’s name unique. For this will add an index enclosed in brackets to represent the number of times the folder is duplicated.

First, we need to get the of the duplicated folder's name with any characters.

Then look for the enclosed bracket with a number.

You will notice that we escaped the two brackets that surround the number by using a slash. In the middle of the enclosed bracket, we used a character set from zero to nine to define a number. As we need more that one number, we added the plus sign to cater for numbers of two or more digits.

This sounds good but isn’t it redundant to use two Regex expression on a single string we are trying to pass? What if we could do that in one line? To achieve this, will extract both the folder’s name and the number using the curly brackets around them.

To execute the Regex expression, call the match function with the above expression as an argument.

The above result of match function will return null if no value found or the values extracted. Check the match() function reference for more detail.

Note: The first value of the array will be the string you passed in, and the rest is the extracted values.

I leave the next part for you to complete so that the function getDuplicateName return the folder’s name and the index at the end of the folder if it is a duplicate.

If you want to look at the full source code, visit the GitHub repository or the demo of the file simulator. 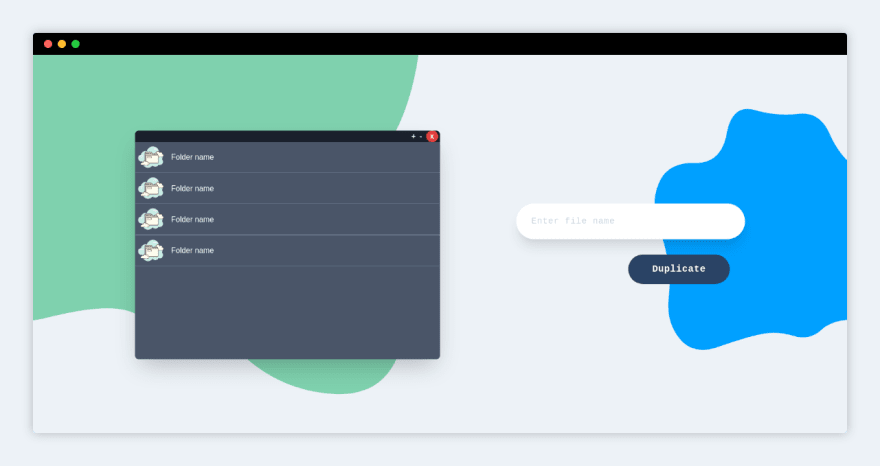 Once suspended, dinmon will not be able to comment or publish posts until their suspension is removed.

Once unsuspended, dinmon will be able to comment and publish posts again.

Once unpublished, all posts by dinmon will become hidden and only accessible to themselves.

If dinmon is not suspended, they can still re-publish their posts from their dashboard.

Once unpublished, this post will become invisible to the public and only accessible to Dinys Monvoisin.

Thanks for keeping DEV Community safe. Here is what you can do to flag dinmon:

Unflagging dinmon will restore default visibility to their posts.