In the first part of this tutorial series, we created a dad joke command line application that gives us a random dad joke right in our terminal. In this second part, we will be learning how we can use a flag to retrieve dad jokes that contain a specific term.

If you're familiar with command-line tools, you will recognise the use of flags. A flag provides a way for the user to modify the behaviour of a command. In this tutorial, we will be modifying the random command to allow us to search for a random joke that includes a specific term.

Cobra has two types of flags:

Our example is small enough that this distinction does not have a real impact. We will, however, choose to apply a persistent flag because in an imaginary future, we'd like all sub-commands of random to be able to take in a term.

In the init function of our cmd/random.go file, we can add a persistent flag. We have named it term and given it a description:

That's all it takes to add a flag to a command. There are several ways we can make use of this flag. Here's how we will approach it:

Let's put together the initial skeleton of the function we need to handle search terms. In cmd/random.go, we will add this new function. For now, all it does is print out the search term to the terminal. We will build up the function as we proceed:

Now we can move on to check whether the user has used the term flag. In the Run function of our randomCmd, we can add the following check:

Now we can go into our terminal and run the random command with and without the term flag:

As a reminder, we are using the icanhazdadjoke API for all our jokes data. If we take a look at the API documentation, we can see that we can pass a search term to our request 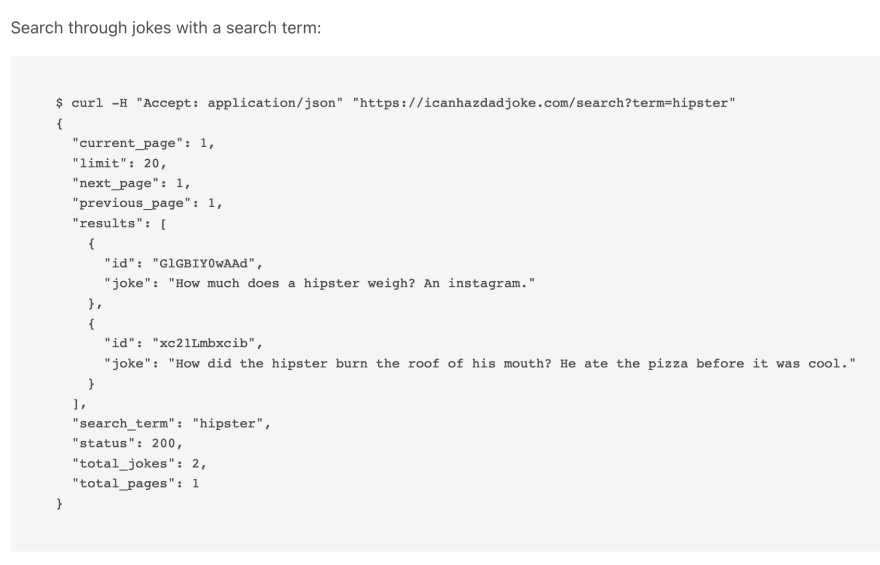 We can run the example curl command in our terminal:

We can represent the JSON response as a struct in our code:

Get data with search term

Now that we have a better understanding of the data that we'll be working with, let's move on and create a method get the data.

First we will need to create a skeleton method. To begin, we just want to be able to pass a search term to which we can pass in to the API call.

In the previous article, we had already created a method that helped us to get joke data. We even creatively called it getJokeData(). This method takes in an API url as it's only argument. Within the body of our newly created getJokeDataWithTerm function, we can add the following lines:

Then we want to unmarshal the returned responseBytes, following the shape of the SearchResult{} struct

Unmarshalling the responseBytes gives us the Results as json.RawMessage. We will have to unmarshal this raw JSON, following the shape of Joke{}, which is a struct we had created in the first article.

Our Results may often contain more than one joke. We can store all the jokes in a []Joke{} (slice of Joke{}).

Next, we'll want to return all the jokes we process using this method. We also want to know how many jokes we got back as well. We can update the function to be able to return these two values:

For the time being, we throw away the totalJoke value by using an underscore (_). We are only doing this for demonstration purposes, so fret not, we will use it in the next section.

If we head into the terminal now and test our command, we just keep getting all the search results.

This isn't really what we're going for. We want to be able to get one random joke that contains a specified search term each time we run the command with the flag. We can achieve this by introducing a function to randomise our results.

First, though, let's import a couple of packages

Then we can write a skeleton randomiser function:

Our randomiseJokeList function takes in 2 arguments:

We can update our randomiseJokeList method with the following code:

Here's what's going on in the above code snippet:

With our newly created randomiseJokeList function all complete, we can return to our getRandomJokeWithTerm function and update it:

If we go into our terminal and test our flag now, we will be able to get a random dad joke that contains a specified term:

Everybody likes a good dad joke from time to time, so I'm sure your friends will want to use your tool. We will be able to distribute this dadjoke CLI tool as a Go package. In order to do this:

Then you will be able to run your tool like this:

In this tutorial we learnt how to extend our dadjoke CLI tool so we could implement a flag for our random command.

Congratulations, you did great. Keep learning and keep coding. Bye for now.

Add flags to a CLI tool built with Go and Cobra. Video tutorial available on the Div Rhino YouTube channel.

Once suspended, divrhino will not be able to comment or publish posts until their suspension is removed.

Once unsuspended, divrhino will be able to comment and publish posts again.

Once unpublished, all posts by divrhino will become hidden and only accessible to themselves.

If divrhino is not suspended, they can still re-publish their posts from their dashboard.