This is a step by step on how to get ArgoCD up and running locally on a k3s cluster, and also demonstrate a bit of what ArgoCD is capable of. This will get you up and running on a local k3s cluster, so you don't need your own existing Kubernetes cluster!

Some info before you jump in!

If you have a Kubernetes cluster already that you'd like to run ArgoCD in and have kubectl configured for it already, you can skip installing k3d and skip any k3d related steps.

If you are using a GKE cluster, there is one extra step that you must take. You will need grant your account the ability to create new cluster roles with the following command:

Configure kubectl to your k3s cluster

Head over to http://localhost:8080/ where you should find the ArgoCD UI. You should see a login page. Your username is admin and your password is actually the name of your running server. You can get that with the following command:

Then you'll see the following screen! Congrats, you got ArgoCD running in your cluster!

Login to ArgoCD through CLI:

You'll need to login to the running ArgoCD server through the CLI so that you can deploy applications through the CLI with ArgoCD. You could also simply do it through the UI, but we will proceed here with the CLI.

Your password here is the same as the one from the previous step.

Since we are using the example repo I've provided, you'd simply replace the repo in the command with your own. Also, replace the path to the deployment directory to the path specified in your own repo.

In true GitOps fashion, you would NOT hold both the source code and the deployment manifests in the same repo. I've only done so for the sake of a more simple demonstration.

We are deploying into the default namespace, which you typically wouldn't, but for the sake of the demo it should be fine.

After which, you should see the application show up on the ArgoCD dashboard:

You'll see that the current state of the deployment is out-of-sync with the deployment configuration in your git repository.
Click on the Sync button, in the UI and then click Synchronize.
Now you can watch your app/server deploy! 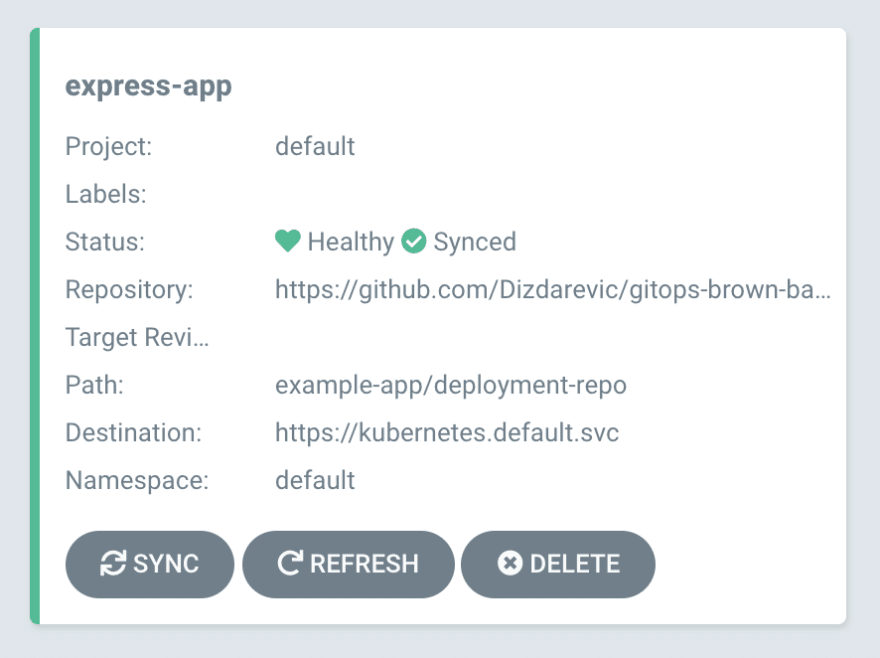 Expose the v1 docker image (stated in the prereqs) with ArgoCD

I'm specifically exposing 3000, because this is the port defined in the deployment configuration as well as the port that is exposed in the docker image being used. You can do so with the following command:

Now you can visit http://localhost:3000/ and see your first server deployed to a cluster with ArgoCD! Congrats!

Deploy v2 and watch it redeploy

Before we begin, stop port forwarding on port 3000. It will break anyways once we redeploy a different version.

Now we will modify the version of the docker image being used in the deployment repo.

Go back to the ArgoCD UI. Click Refresh on the application and you should see that it is out-of-sync again. Do the same synchronization steps as before. Allow the new version of the service to spin up, and for the old one to spin down.

Follow the same steps as before to expose the service on port 3000. Once you visit http://localhost:3000/ again, you should see a different message that shows you are using the new docker image!

Spin down everything after you're doing poking around!

Once suspended, dizveloper will not be able to comment or publish posts until their suspension is removed.

Once unsuspended, dizveloper will be able to comment and publish posts again.

Once unpublished, all posts by dizveloper will become hidden and only accessible to themselves.

If dizveloper is not suspended, they can still re-publish their posts from their dashboard.

Once unpublished, this post will become invisible to the public and only accessible to Edvin.

Thanks for keeping DEV Community 👩‍💻👨‍💻 safe. Here is what you can do to flag dizveloper:

Unflagging dizveloper will restore default visibility to their posts.