Hello everyone !
As you might be aware, hacktoberfest is approaching, and in about a month many of you will be helping out on open source projects. Of course, working on projects is a side effect, you know why we really do it...😏😏 To plant a tree, obviously 🌳🌲🌳🌲 (Seriously, we should do that seeing the amount of wildfires this year)

Anyway, while making PRs, you might be asked to squash formatting or spelling error commits, and to save you a Google search, I am writing this post to show you why, when and how to squash commits in your PR.

Why would you ever want to squash something???

So imagine this, you have written your beautiful code, written comments in a well known format, the code is compiling and working, and you satisfyingly make a commit with the perfect commit message.... Only to realize later that you have made a spelling error 🥲🤦 Now you can use a soft reset, fix the error, and re-commit, leaving no one any wiser, but what if you had already pushed the commit in PR?

More realistically, imagine you're working on a PR, and as you're pushing the commits, and they're getting reviewed you accidentally mess up formatting and commit. Or along an ongoing discussion in a PR, you have made some patch commits and now before merging the PR you want to combine them, as old patches don't really make sense . This is where squashing the commits would come handy.

Squashing allows to combine or 'squash' the commits together, leaving a nice git history behind. That way you can combine all your patch commits into a single commit, or squash formatting and spelling error commits into other commits, leaving behind a git history of only necessary commits. 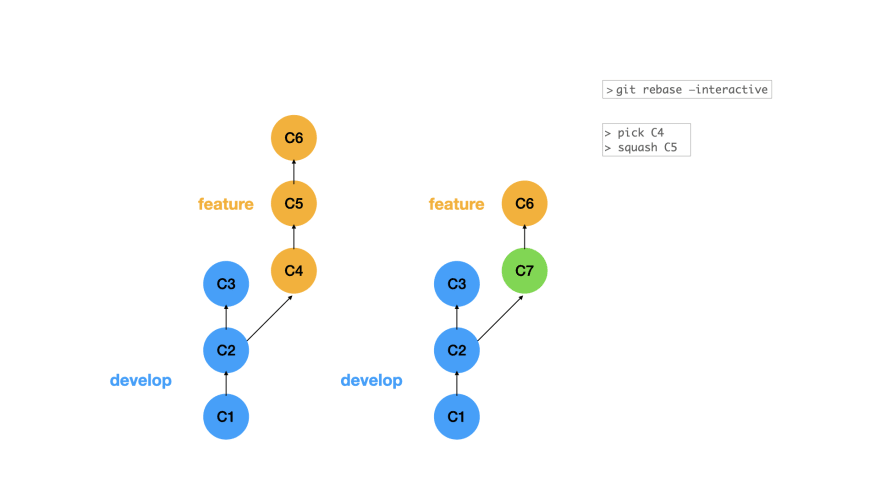 When should the squashing be done?

Now on an important note, you should not squash commits if they're pushed to the main branch of the repository. Squashing changes git history, which means that history of all forks of that branch will be inconsistent with your repository, giving everyone a lot of merge conflicts, and you know how you were when you got conflicts, right 😉 😉

However if you're working on a branch which is not main for an issue, and you intend to make a PR to the main branch, it is totally fine to squash the commits. As most of the times you alone are working on that specific branch, even if the history changes it will not affect anyone else. Then once everything is done, you can merge the PR without any history conflicts.

How to squash commits

Let us see with an example. Consider a project on which you're working, that already has some commits on its main branch.

Now to grow some trees 🌲🌳 you decide to work on this project and help in solving issue-1. So you fork and clone the project, make a branch named issue-1 like a good contributor and start working on the issue.

You add feature 1 and feature 2 in their own commits and make a PR. After discussing with the reviewers, you find that there was a bug in your commits and you make a commit to fix it.

You have your main branch's head on Add Readme commit, and issue-1's head on Bug Fix commit.

Now as you're about to start with feature 3 , when someone comments on your PR, noticing a formatting and spelling error😭😢
Ah well.... You fix those, make a commit and start working on the feature 3. After finally making if work, your commit history now looks like this

As you push these to your repository, and wait eagerly to get it merged, someone asks you to squash the formatting commit, so the main repository history would look nice.

Now to squash the commits, you need to run

The -i option make the rebase interactive, and HEAD~4 considers last 4 commits from current Head position for the rebase. If your formatting commit was 5 commits before current, you would replace 4 with 6 or some numbers greater than 5, to get all commits till there.

After running this, you will see a message like

This shows first, the commits : from oldest to latest, and then available options, such as squash, edit, fixup... Git can be really powerful once you get to know it... But I don't know much of it other than handful of commands, so let us get on with squashing the formatting commit.

In case the commit was something like a patch in series where you want to keep the message, this will allow you to do that. Otherwise if you just want to forego the message, you can also use the fixup instead of squash. Here you can comment the second commit message, and save, like usual git commit.

Ah, now you have a clean git history, alas, if you try to push this to your repository branch, you will get error saying cannot push because histories are different. Your repository has the formatting commit whereas your local has no such thing in its history. To fix this you'll have to force push :

With this your PR will be updated, hopefully merged, and you'll be one step closer to planting that plant 🌱

Hope you found this useful, and may your PRs be clean :)

Your PRs make a difference 😍

We've got a great set of issues to finish documenting our v1 API. Can you help?

Once suspended, dj-unicode will not be able to comment or publish posts until their suspension is removed.

Once unsuspended, dj-unicode will be able to comment and publish posts again.

Once unpublished, all posts by dj-unicode will become hidden and only accessible to themselves.

If dj-unicode is not suspended, they can still re-publish their posts from their dashboard.

Once unpublished, this post will become invisible to the public and only accessible to YJDoc2.

Thanks for keeping DEV Community 👩‍💻👨‍💻 safe. Here is what you can do to flag dj-unicode:

Unflagging dj-unicode will restore default visibility to their posts.