Choosing the right programming language for your startup is not an easy decision, considering the huge variety of available options. And it's not enough to choose the one just because the language is more popular, or recommended by developers, or is considered the best by your mate. The choice of a programming language, especially for a startup, should be wise, reason-based and ruled by the business goals your product aims to achieve.

But why is it so critical?

The thing is that programming languages are really different. They are used to meet various needs (e.g. PHP is intended mainly for web development, C is for low-level programming, and also there are all-purpose languages like Python, Java, and JavaScript which still have their own special features). And having different syntax, each of them offers another performance.

If chosen properly, a programming language will help you and your startup:

If not selected wisely, a startup may suffer tech-related problems from the very beginning such as over budgeting, overestimation, and a lack of flexibility to follow the demands of the market. All of these are crucial capstones that may drown the whole startup under bad circumstances.

Here comes another important question that we should answer before speaking about the best programming language for a startup.

Why Startups Are So Special?

Why do they need a specific approach to development? There's quite a lot of information over the web that elaborates on this topic (we strongly recommend getting familiar with the Lean Startup, but here is the essence:

In these circumstances, choosing the right programming language becomes even more important, as it helps you to partly mitigate some of risks and to spend less money on the creation process. 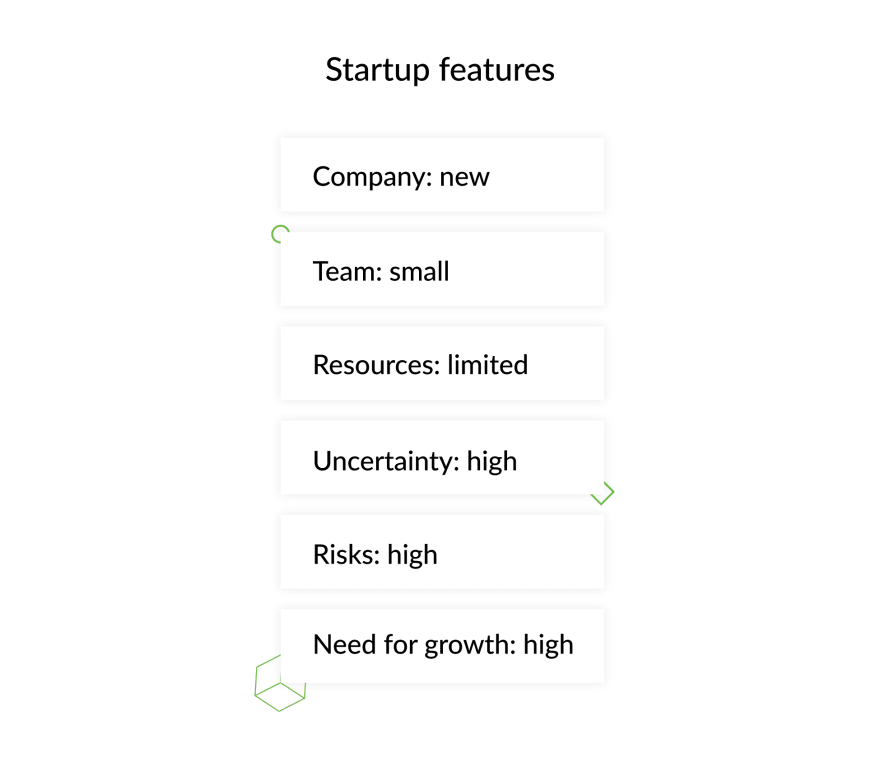 What Programming Language is the Best for Startups?

Consequently, from what was said above, a startup-friendly programming language needs to help the company:

Python is often considered one of the best choices for startups in line with all of these requirements.

Certainly, the choice of language depends on the type of the product and business goals of its owners. This means that, despite Python’s versatility, in some cases another language will be more effective. It’s not about Python being unsuitable for some kinds of products. It’s just that sometimes you can do the same things that you can do with Python more efficiently with another language (e.g. if you need a streaming service). But, in 90% of cases, Python remains the most legitimate programming language for new companies and our rich experience in developing products proves this statement.

Reasons to Use Python for Your Startup

Being used for more than 30 years, Python is obtaining more and more admirers in developer communities all over the world. Forecasts say it's on track to have an incredible amount of traffic by 2020. 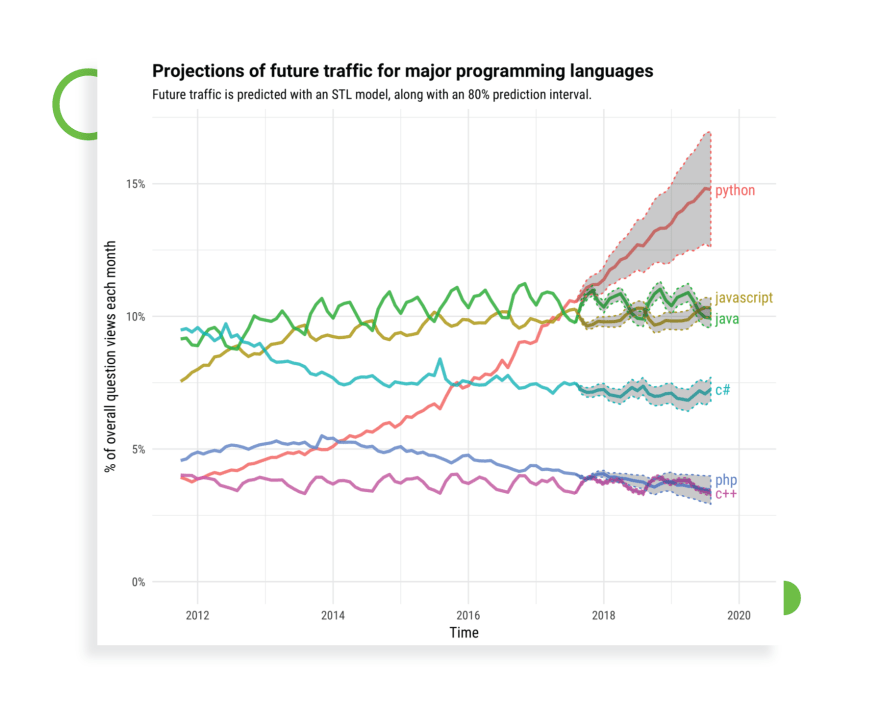 And here's why so many people consider Python the best programming language for business.

One of the main things what Python is appreciated for is that it's intuitive and quite easy to learn, compared to other programming languages. According to the Lifehacker's poll, it's the #1 Most Popular Programming Language for First-Time Learners.

2. It's great for building MVPs and prototypes

Rapid development is one of the basic principles officially followed by Python. And yes, it is really considered one of the most productive languages largely thanks to code-efficiency and the possibility for code reuse. Since it is easy and time-effective, Python is a good choice for building quick yet functional prototypes to attract investors or test ideas among the product's audience. This is one of the main advantages when it comes to startups.

3. It's time-tested yet innovative

The history of Python started in the 1980’s. This means it's time-tested but not yet outdated. On the contrary, Python is well known as one of the most innovative and versatile programming languages used to implement cutting-edge ideas, because it is open-sourced and, thus, is constantly replenished with new libraries and solutions.

4. It's popular and universal

One of the direct consequences of high popularity is that Python has a huge number of admirers in every country in the world. In turn, this means that it's quite easy to find developers for a project and replace them if necessary. 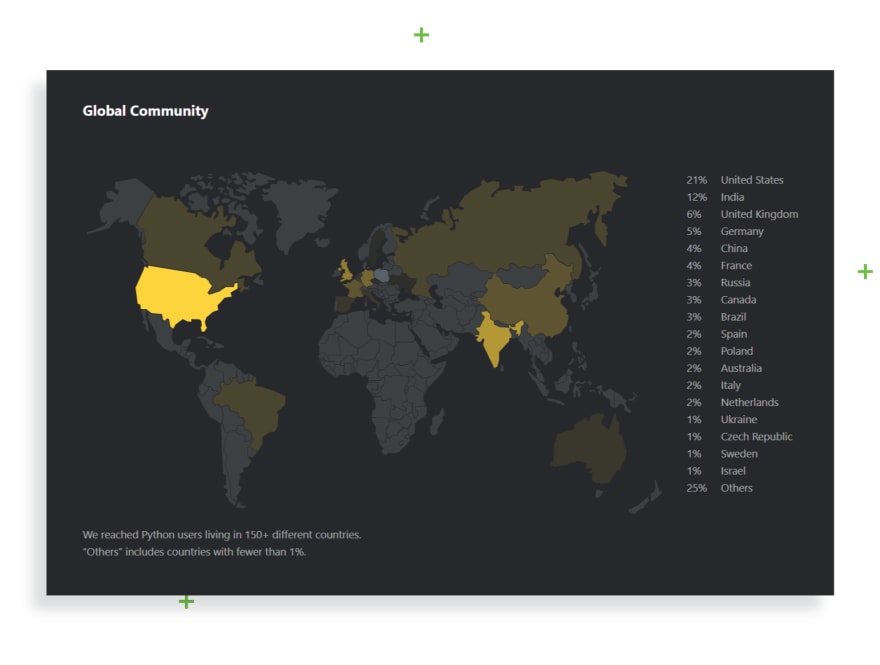 5. It has wonderful documentation and community support

Another advantage of Python often passing by the attention of business owners is that it has one of the best stacks of technical documentation ever, as well as having a huge and highly supportive community. This means that, whatever task you give to your developers, they will not get stuck for a long time looking for a proper decision but will be able to find one quite quickly. And again, time is money.

Is your project consigned to deal with large loads of data? These are highly popular nowadays. Another piece of good news is that Python is the perfect choice for all types of development which are concerned with big data, machine learning and/or artificial intelligence. This is because it has powerful packages intended for these types of tasks (like Panda and NumPy), and also wide possibilities for data visualization through APIs.

Research says it's one of the best uses for Python. 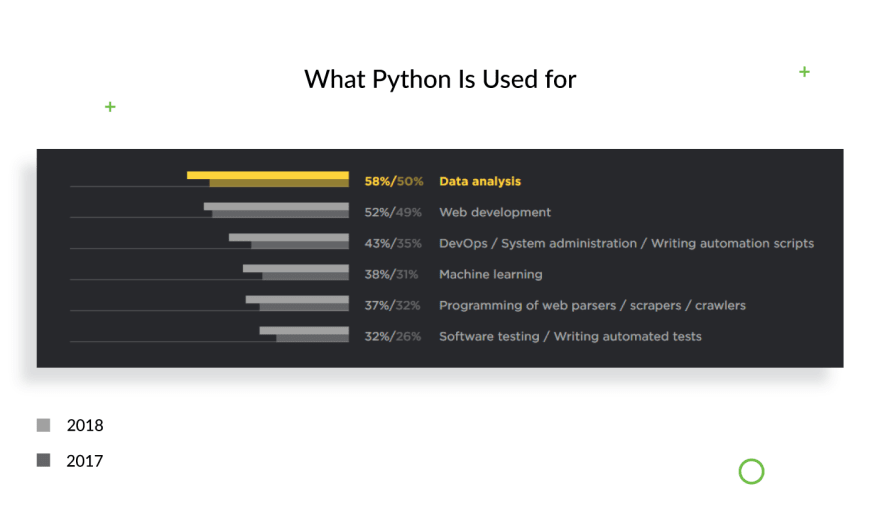 Literally, this means that thousands of the best minds around the world are constantly building the platform. On the other hand, it also means that, as an open-source product, Python can be implemented anywhere you please, as well as modified for the needs of a specific project. Another thing that adds flexibility is the incredible amount of libraries (packages) which can be used by developers as pieces of turnkey solutions.

As mentioned earlier, it's crucial for a startup to be ready for any kind of changes, as well as for quick growth. Python is the best programming language for scalability. It all comes from simplicity: developers are able to easily overcome any obstacles and scale the project up or down without time-consuming processes.

9. It doesn’t require a big team

Python is not bound up with a large amount of written code, which is why it allows developers to work faster and, what is even more important, to keep a smaller development team than many other programming languages. That's really good news for a startup, because "fewer people" means "fewer expenses". 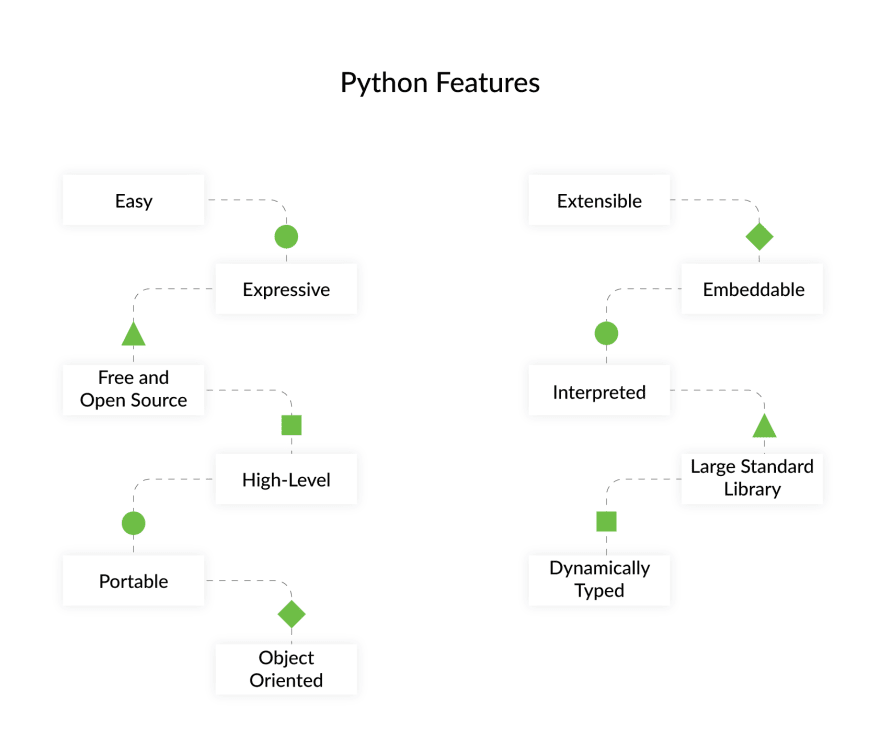 How Will the Django Framework Help Your Python-Based Startup?

Choosing the right programming language for a startup is just the first step. What you need to do next is to consider the framework, which is an environment full of ready tools, blanks, and modules which helps developers do their work in less time and with less effort. And yes, there are also a number of options, with the most popular and, at the same time, the most reasonable choice, being Django.

There’s an idea that "the ability to use Django is perhaps one of the biggest advantages of learning Python" and our practical experience totally confirms this statement.

In addition to all the Python advantages for development, Django has the following features:

What Are the Most Famous Examples of Python/Django-Based Products?

First of all, many well-known projects and companies as Google, Instagram, Spotify, Dropbox, The Washington Post, Mozilla, NASA, and many others rely on code written in Python using the Django framework. 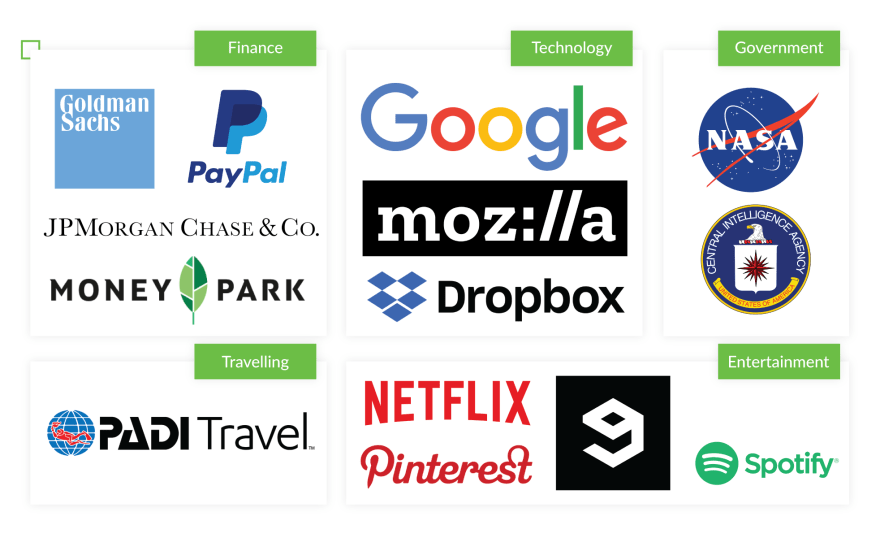 Except for the giants, other successful companies have chosen Python/Django. Here are some of them:

There are many programming languages out there. And, of course, each of them has its own advantages. It would be quite unfair to say that only one specific language is worth attention as, otherwise, the others just wouldn't exist.

When we say that Python is the best programming language for a web startup, we mean it will give you:

Python together with Django is a combination being tested by our team far and wide for many years. And with each next project successfully completed using Python, we clearly see it was the best choice a technical partner to help our client launch their startup.

This article about the advantages of Python is written by Gleb Pushkov - Senior Software Engineer at Django Stars. Originally posted on Django Stars blog.

Top 10 things to do if you are a tech entrepreneur

Django Stars
How to Develop a Real Estate App That Stands Out
#application #development #startup #realestate
How to Write an Investment Proposal: A Step-by-Step Guide
#startup #investment #development
Top 11 US Lending Startups That are Disrupting the Real Estate Industry
#fintech #startup #lending #mortgage