For quite some time I've been adding a file called ui.py in some of the Python projects I was working on.

Since I believe in the rule of three and I already have three different projects using it, I've decided to share it to the world.

Feel free to take a look at the github page.

Let's start with a screen shot: 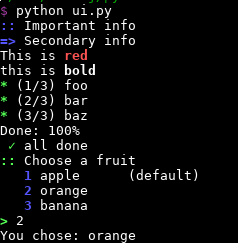 It's a module to write colorful command line interfaces in Python.

It's a tiny wrapper on top of colorama, with a (IMHO) nicer API than crayons or lazyme.

This will print the word 'Error' in red, the file path in bold, and the 'not found' normally.

The API follows the behavior of the print() function: by default, tokens are separated by spaces, \n is added at the end, and you can specify your own sep and end keywords if you need to.

It also allows to display items of a list, taking care of "off-by-one" errors and aligning the numbers nicely (note the leading space for 1/12)

You can define your own suite of characters, which will get a color, a unicode and an ASCII representation (so that it works on Windows too.)

The module also contains "high-level" methods such as info_1, info_2, info_3, so that you can write:

Which will be rendered as:

This allows you to group your messages in a coherent way.

In the same vein, warning, error and fatal methods are provided for when things go wrong. (The last one calls sys.exit(), hence the name)

There's also a debug function, for messages you are only interested when debugging: you can control the verbosity using the CONFIG global dictionary.

Arbitrary string with a default

Note how the prompt goes from Y/n (y uppercase), to y/N (n uppercase) depending on the default value:

Note how the user is stuck in a loop until he enters a valid answer, and how the first item is selected by default:

Works also in a with statement:

You can also write tests to assert that a certain message matching a regexp was emitted.

It is available as python-cli-ui on pypi

Terminal lover? Which tools do you use daily?