TL;DR: we are going to build a customized RSS reader on the basis of Notion using Notion API beta and AWS Lambda. See the source code here. 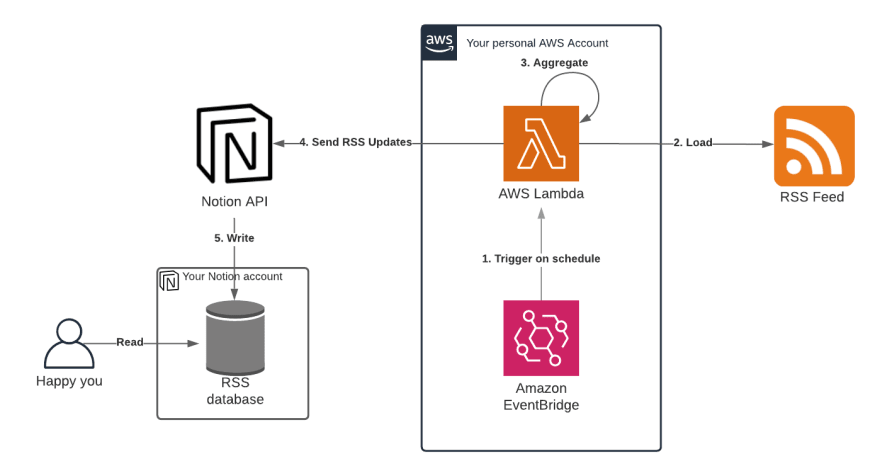 As of May 13th, the Notion had released a public beta preview of their API. This is a long-awaited feature that enables you to further consolidate your activities in one single tool. One particular thing which I always wanted Notion to provide is the integration for my daily RSS feed.

While Notion itself doesn’t have anything out-of-the-box for pulling in your RSS feed, the release of Notion API is something that provides us with the opportunity to leverage a myriad of automation platforms as well as serverless solutions from Cloud providers to implement whatever integration we want.

You should know that there are several decent RSS readers like Feedly which do a fine job of aggregating your RSS feeds, so before jumping the gun I recommend checking them out.

Another thing which you might want to check out is the automate.io. This is one of many automation platforms which promises you to do what you need in just a few clicks.

There is indeed an advertised RSS integration with Notion which I went to test out — only to realize that it’s just not good enough for me. There seems to be a lack of configurability, like the ability to set up multiple RSS feeds, as well as be able to tune trigger logic.

However, we still can build what we need using a bit lower level abstraction — serverless function platforms like AWS Lambda or Azure Functions.

I personally was working with AWS for years and often use it as a platform for my personal projects, so here I’d go with that option. However, there are no AWS-exclusive specifics in the problem we’re about to solve, so any serverless function platform would work for you just fine.

Here is the list of required stuff before moving forward:

Make sure you’ve explicitly exported the AWS profile with these credentials:

AWS CDK will check this variable by default to figure out which account it works with and what IAM user permissions it should leverage.

While you can do all of the needed AWS changes and configurations by hand clicking through AWS Console, I usually go with the infra-as-a-code (IaaC) approach, so I am going to stick with that here.

AWS CDK is a relatively new way to provision your infrastructure following IaaC even more literally than Cloudformation / Terraform did before — using a programming language like Typescript to create AWS resources.

I will use AWS CDK here, but you can again achieve the same results with other IaaC options like Cloudformation, Terraform, and others.

| You will be able to find all source code here

If you never worked with AWS CDK before — no worries, it’s all fairly simple. I recommend checking out this document. Assuming that you have installed node of at least version 14+ run the following snippet:

Next, create your project directory and init the CDK project:

As you can see — we explicitly specify the language as typescript. There are many other languages supported for the CDK, however, with Typescript, you'd be able to find most examples for as well as it being the first-class citizen language for the CDK, since all others are just wrappers.

Assuming cdk init ran without problems you should get the following structure:

There is quite a number of files, but don’t worry — you don’t need to deal with most of them. The part you’d be looking into is in the lib folder - all the resource stack definitions will go there. By convention, CDK will create a single file there named notion-rss-feed-stack.ts.

So let’s go ahead and modify our Stack at lib/notion-rss-feed-stack.ts:

There are no resources defined just yet. It’s fine, we’ll add them later and for now, let’s just deploy this stack to verify we are able to perform such operation for your AWS Account.

First, bootstrap the environment (you need to do it only once per AWS account, and might not need to do it if you’ve been using CDK before):

Then — deploy our resource stack:

You’re now all set for the actual development!

Let’s create a Lambda function that will pull the specified RSS feed and push it to the Notion. We’re going to put lambda code in a separate folder:

And then add all the needed dependencies:

Obviously, this is not the final version of the Lambda function, but something we can use for now to implement a proof of concept solution and then gradually improve upon.

Let’s get back to our resource Stack and create an actual Lambda function resource in AWS.

And now we should be good to deploy our Lambda:

The CDK would ask you to confirm the creation of the IAM Role needed for the Lambda execution. Proceed with y as your answer and see the stack update progress. Finally, once deployment completed, you should be able to see the ARN of our Lambda function:

Your exact Lambda name is always account-specific and will differ a little bit from mine, so be sure to copy the one that you actually see in your CDK deploy output.

Let’s use provided function name to test that Lambda function:

This last line indicates that our Lambda had been successfully executed and had pulled in RSS feed of the AWS latest news. With this output verified we’re now officially halfway through.

We need to prepare Notion before we can actually start sending the RSS content. Essentially we need to do the following:

| The above steps are also described here in much greater detail, so if you’re having troubles understanding the context — check it out.

But before — let’s figure out exactly what we are going to do with respect to displaying RSS entires in Notion. I see there are three ways to achieve what we need, and I am going to walk through all of them.

We can create a Notion database, define some schema for properties and add items as child pages — a page per RSS item. This approach would allow us to supply rich content for every page (aka RSS entry), like a textual preview of the feed item.

The idea here is to establish a regular Notion page with a nested table, which we can simply delete at the beginning of each integration run and re-create with RSS items. However, at the moment Notion API beta does not allow you to work with tables.

Finally, we can establish a root page to serve as a table of contents and create a child page for every integration run (with a page title of current date), and for that given child page simply create a bulleted list of links. We won’t have any preview apart of the link name — RSS item title, but in many cases that will be enough. This is the variant we’re going with here.

Give it some meaningful name, upload an RSS icon, and finally hit Submit. 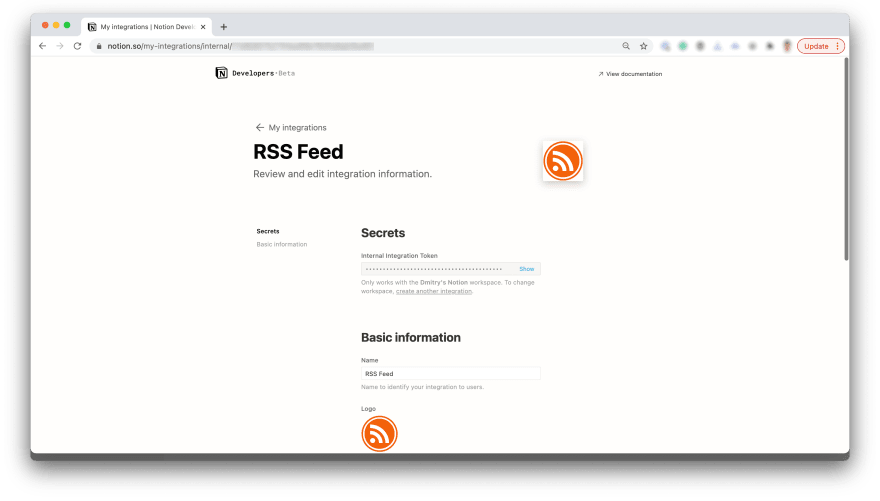 Next — create a place to store RSS items in Notion. For that create a new page, set the title RSS, and that’s pretty much it for the page layout. Later on, our integration will be creating here child pages with RSS content inside, and the RSS page — as long as it’s empty — will display all the children pages as a sort of table of contents. 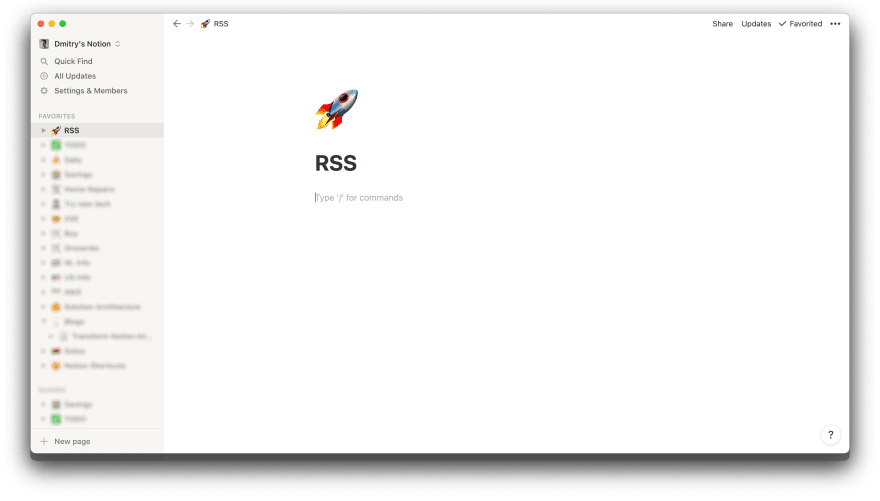 The last thing for the Notion part — allow our integration actually access the page we’ve just created. So go ahead select our RSS page, hit Share → Invite → Select your integration. 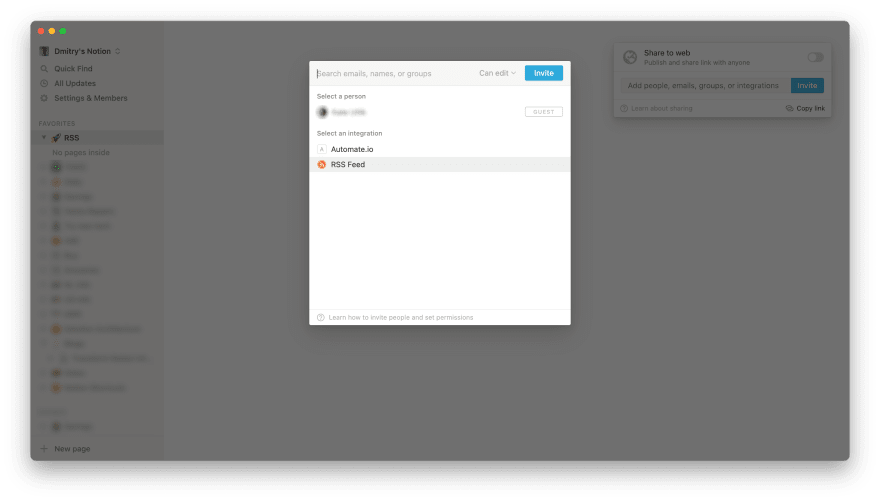 Switch back to the code repo. We’re about to start sending RSS items to the Notion API. For that, we need to pass the integration token to Lambda. I strongly advise against hardcoding it, and rather suggest putting it in .env file. Simply create .env file at the root of the project and fill it with the following entries:

You can replace the page name and RSS feed URL with values of your choice, however, bear in mind that NOTION_PAGE_NAME should have the exact page name, which you've created in the previous step. Later on, we'll use the Notion API Search endpoint to find your page unique ID.

You can see that we simply pass these values as-is via environment variables.

And that’s pretty much it for the Lambda part. Deploy it:

| Again, don’t forget to provide your own specific function-name found in the CDK deploy output.

If everything is good — you should be able to see your daily RSS feed: 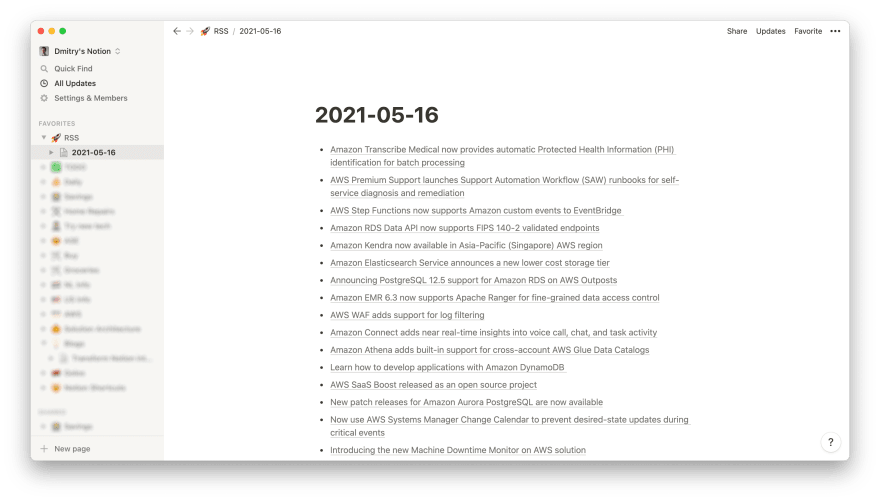 So every time you invoke Lambda, a page with the current date gets created and lists all the RSS items in it, linking out to the respective pages.

We’ve got our RSS feed in Notion! However, we don’t want to manually use AWS CLI every day, so let’s go ahead and schedule our Lambda to be executed on a daily basis automatically.

For that, we will use AWS EventBridge, which provides the capability to define CRON expression for triggering Lambda.

First, need to add some related dependencies. Switch to the project root and run the following:

Next — create an event rule and make it invoke Lambda on schedule. Edit lib/notion-rss-feed-stack.ts as follows:

Pay attention to the cron expression — you should set it to value that works for you. In my case, I’ve set it to trigger Lambda every day at 5:30 am UTC. You can read more about AWS cron expressions here.

And this concludes our sample implementation.

| As I said in the beginning, you may find the final version of the sources here

There are many areas to improve upon which I didn’t cover here for the sake of simplicity, but you’re welcome to take on that:

I hope you enjoyed this guide, and if there is going to be enough interest — I’ll do the second part, where we will address some of the mentioned issues.

Dmitry Kankalovich
A Software Engineer with passion for the Cloud
What was your win this week?
#discuss #weeklyretro
Why "Do Your Own Research" is terrible advice
#career #money #discuss #healthydebate
Meme Monday 🦊
#jokes #discuss #watercooler

Once suspended, dmitrykankalovich will not be able to comment or publish posts until their suspension is removed.

Once unsuspended, dmitrykankalovich will be able to comment and publish posts again.

Once unpublished, all posts by dmitrykankalovich will become hidden and only accessible to themselves.

If dmitrykankalovich is not suspended, they can still re-publish their posts from their dashboard.

Once unpublished, this post will become invisible to the public and only accessible to Dmitry Kankalovich.

Thanks for keeping DEV Community 👩‍💻👨‍💻 safe. Here is what you can do to flag dmitrykankalovich:

Unflagging dmitrykankalovich will restore default visibility to their posts.