A mini-guided tutorial showing how to use virtual environment and why it's matters on virtualenv and poetry illustrated examples.

This blog post is mostly aimed at people who didn't work with it. Here you will find that this is not a complete Python virtual environment reference, it is rather a mini-guided tutorial about:

What is virtual environment?

A thing that isolates other things

Python virtual environment is basically a separate folder that creates an independent set of installed packages, Python binaries in its own directory, that isolates any other installation of Python on your computer.

A thing that prevents conflicts

Python virtual environment is used to prevent interfering with the behavior of other applications. Therefore it will prevent packages or Python version conflicts when working with different projects that are running on the same system. 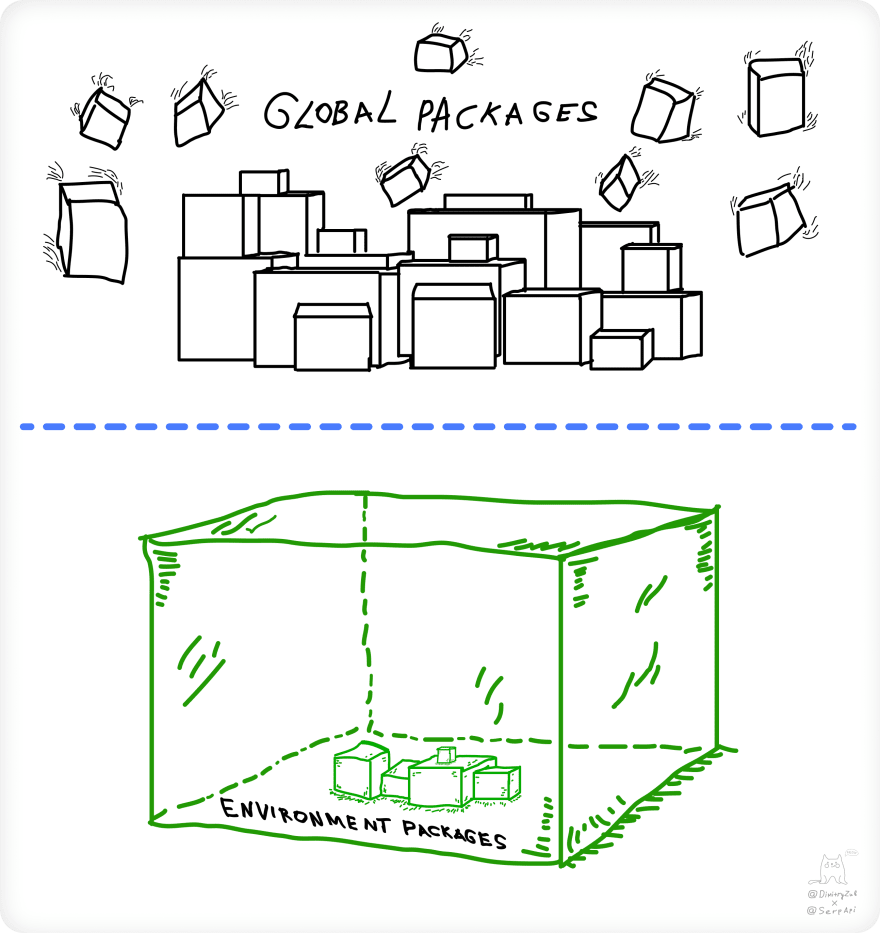 Why to use virtual environment?

Python virtual environment allows multiple versions of Python to coexist with each other. It will let you work with the old version of Python after installing a newer version all on the same system.

If you try to do it without separated virtual environment things will break pretty quickly: 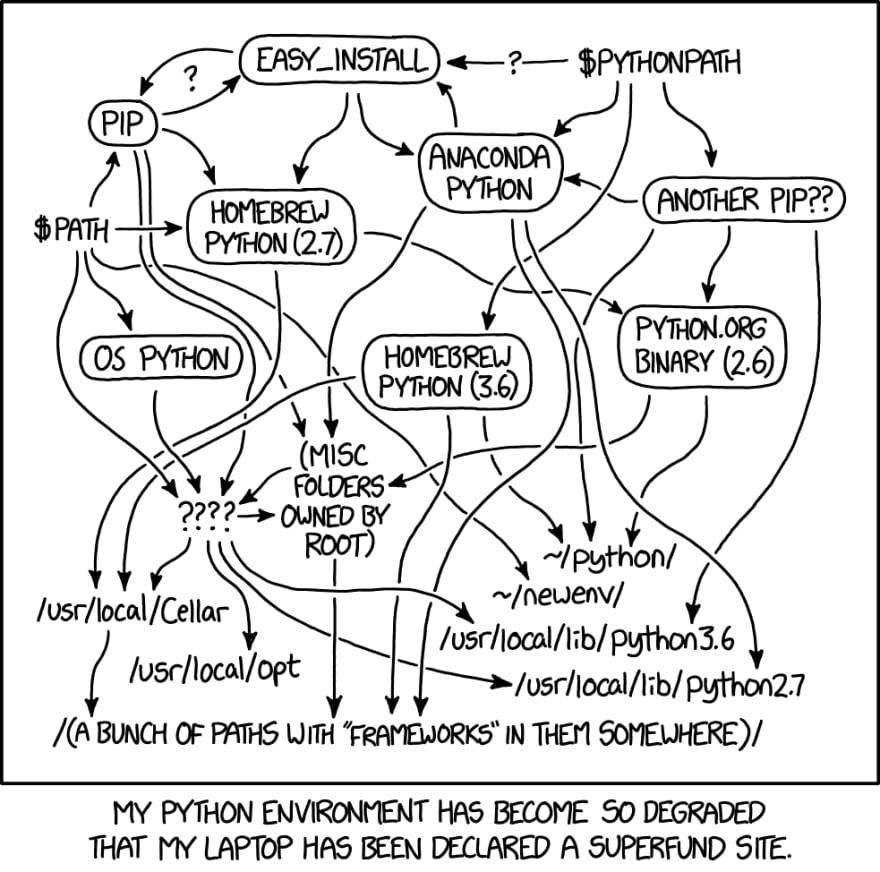 Say you're on two projects, two of them are using serpapi library which is installed globally (system-wide) with a 1.15 version.

Example without the virtual environment 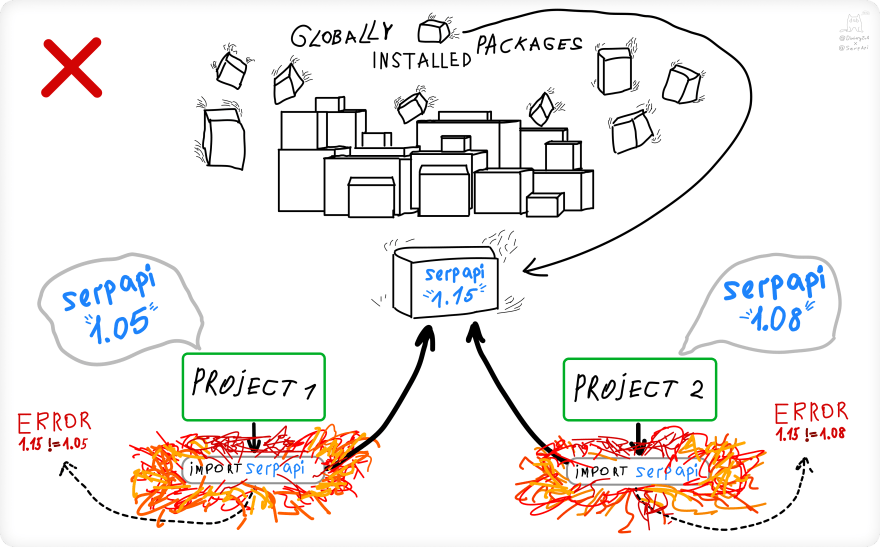 Example with the virtual environment 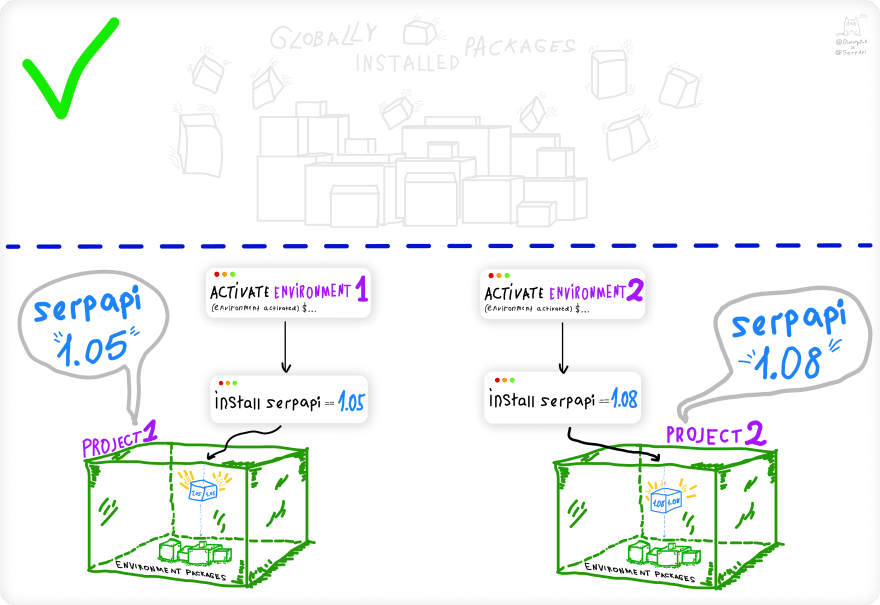 📌Note: You can install globally different versions of site-packages and use them but as stated before it would become a mess pretty quickly and could break system tools or other projects.

How to use virtual environment?

An example process of using Virtualenv

Add site-packages (third-party libraries) to the activated environment based on the folder you've created.

📌Note: if you're on Windows and using Command Line Prompt, use double quotes " when specifying versions:

A quick look at how you can install site-package (virtualenv) and create a virtual environment for a specific Python version:

Use and index added site-packages inside JetBrains IDE

Refer to activate and index installed packages section with the illustrated process using poetry examples for PyCharm, IntelliJ, and VSCode.

Everything is almost the same except you don't need to find a poetry cache folder via command line to find a path to python.exe file because the env folder is already in your project directory that was created earlier above.

An example process of using Poetry

A quick look at how you can install site-package (poetry) for a specific Python version:

The init command will ‘initialize’ an existing directory and create a pyproject.toml which will manage your project and its dependencies:

What the heck is pyproject.toml?

In short, pyproject.toml is the new unified Python project settings file that contains build system requirements and information, which are used by pip to build the package/project, and it is almost a replacement for setup.py.

Before pyproject.toml creation, $ poetry init will interactively ask you to fill the fields about your package/project:

Add dependencies to your package/project:

poetry.lock prevents from automatically getting the latest versions of your dependencies. You can explicitly write lock command to lock dependencies listed in the pyproject.toml

If you specify a constraint (@ or >=), the dependency will be updated by using the specified constraint. Otherwise, if you try to add a package that is already present, you will get an error.

If you're using an already created project that has either poetry.lock or pyproject.toml files, you can install those dependencies to the virtual environment:

The install command read pyproject.toml or poetry.lock file and installs all listed dependencies.

If there's a poetry.lock file:

If there is no poetry.lock file:

(optional) To not install development dependencies, use --no-dev argument:

Use added site packages inside IDE

If using poetry, find a location of the initialized environment first via config --list command. Look for virtualenvs.path in the output:

A few more steps to do:

If using virtualenv, go to env\Scripts\python.exe folder in your project and copy the full path to the python.exe file and enter it as a System Interpreter inside IDE.

To fix this in VSCode we need to select a virtual environment Python Interpreter and set it as a System Interpreter.

Both for virtualenv and poetry, VSCode should automatically detect a proper python.exe file from the virtual environment.

If you don't see a proper path to python.exe from your virtual environment then you need to locate and enter it.

Now you can run your Python scripts from the virtual environment either by the command line or using VSCode Code Runner extension.

To fix this in PyCharm we need to add the path to python.exe from the virtualenv folder and set it as a PyCharm System Interpreter which will index all site-packages from the virtual environment: 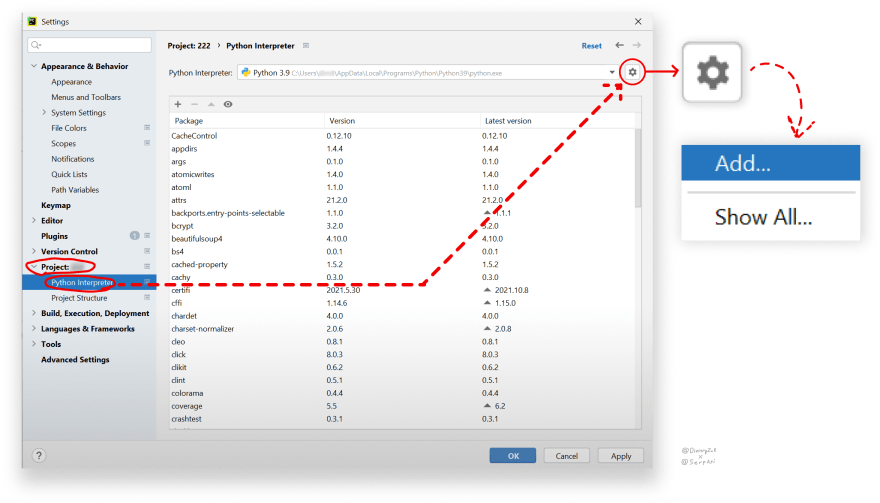 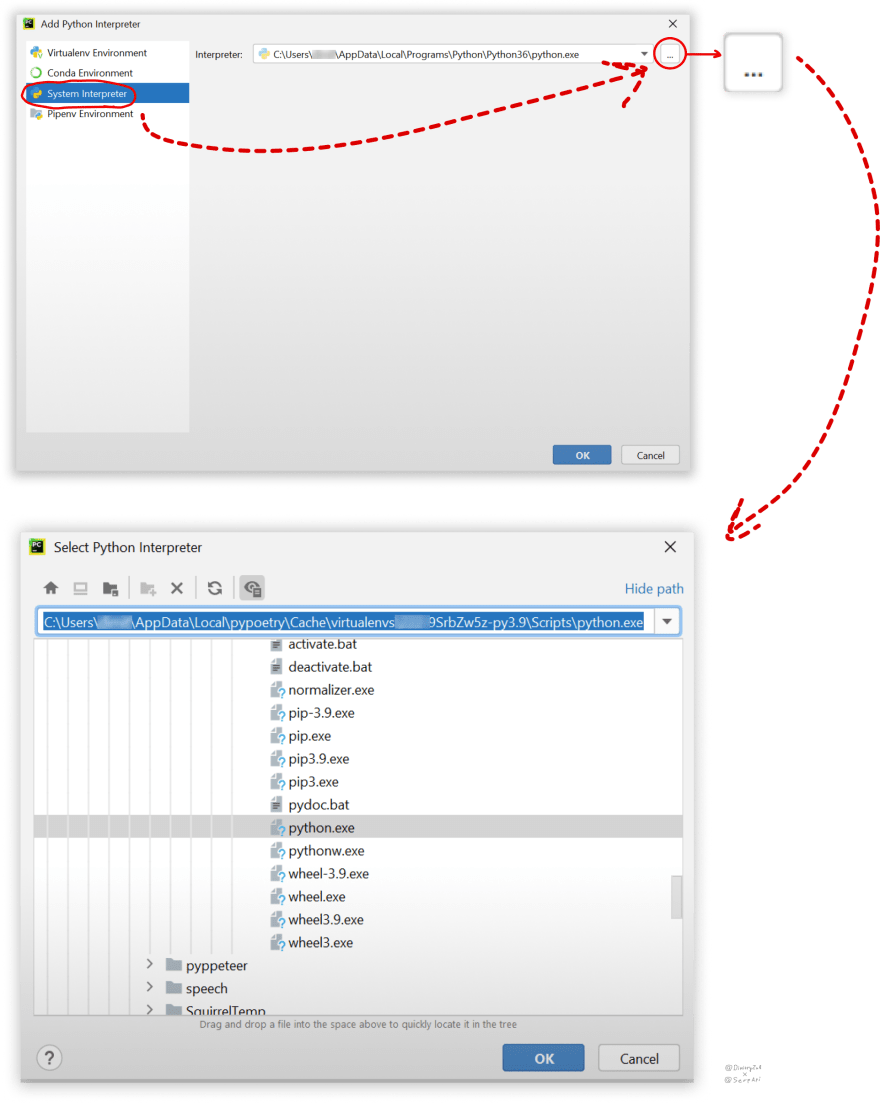 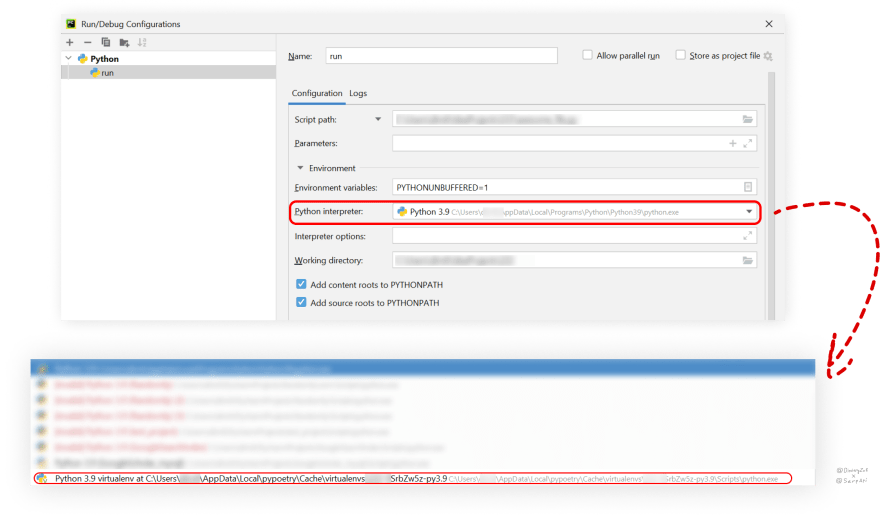 To fix this in IntelliJ IDEA we need to add the path to python.exe from the virtualenv folder as well and set it as a PyCharm System Interpreter with a few additional tweaks which will index all site-packages from the virtual environment: 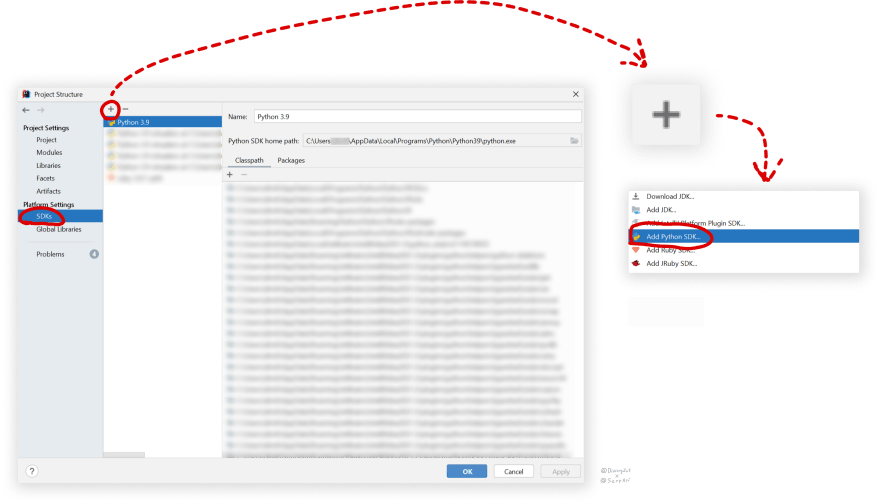 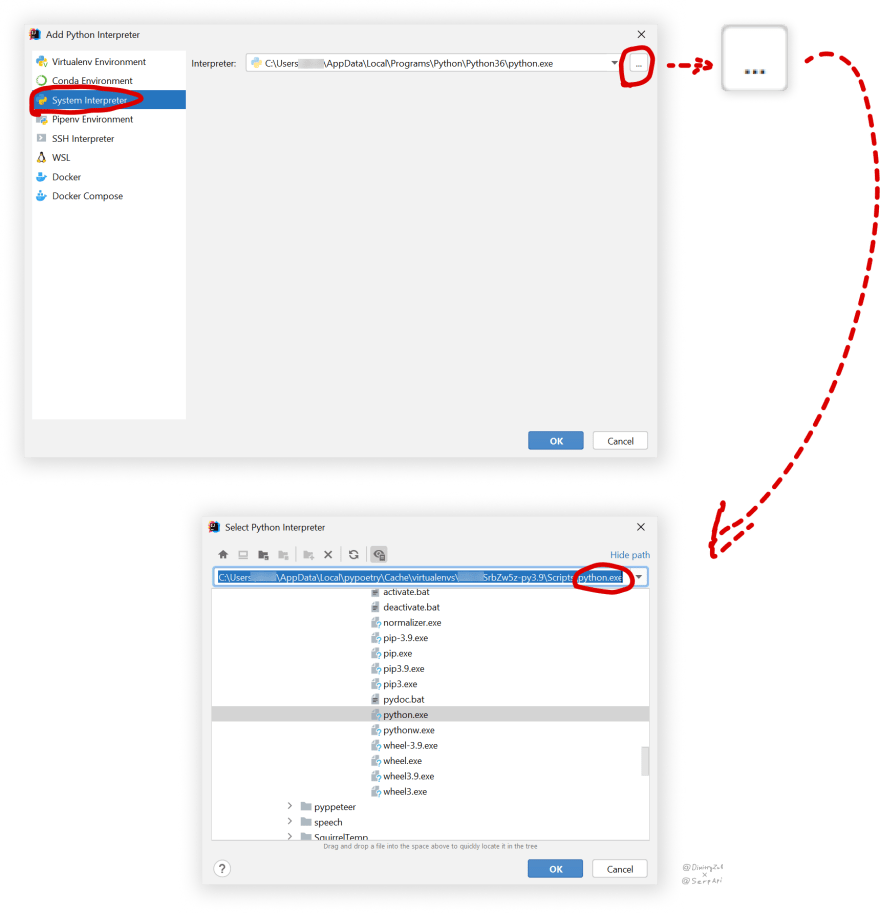 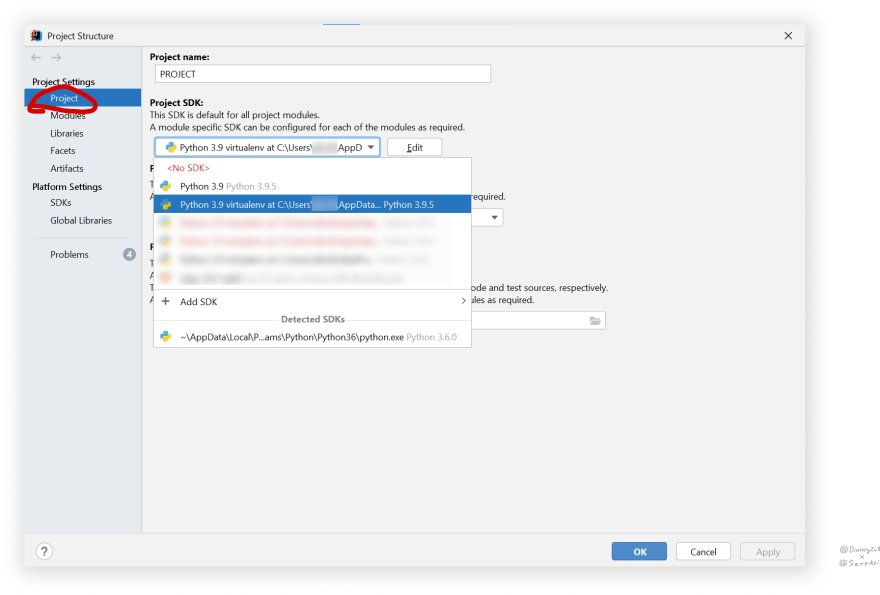 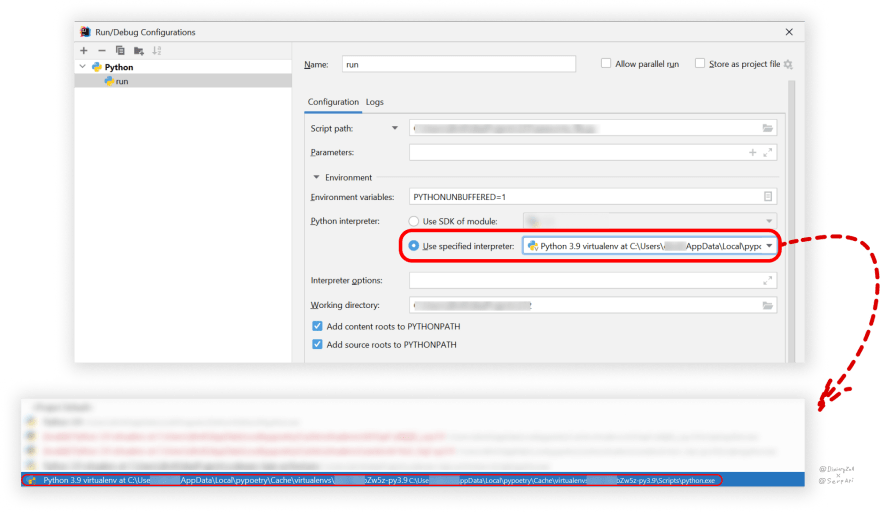 To deactivate virtual environment in order to use system Python both in PyCharm, IntelliJ IDEA and VSCode you need to set Python System Interpreter back to the default one without virtualenv prefix for example: "Python 3.9 virtualenv.." ==> "Python 3.9", a reverse process of what's being shown above.

Gitpod fixes this issue pretty much completely. You don't have to install Python, create environments, it's all there from a click of a button.

Well, of course you need to install something specific for a specific case. Plus, you can code in the directly browser if you really want to.

For example, with Gitpod Chrome extension you can open specifc:

The great thing that you will be immediately on the different branch if you opened issue for example. Its similar to a CI server and will continuously prepare prebuilds for all your branches and pull requests or other types. You can also setup a workflow which let's you do prebuilds (installing site-packages) or start a dev server or something else.

In short, it is better to use a virtual environment if you need to work with several projects at the same time which:

Installing globally will become a mess 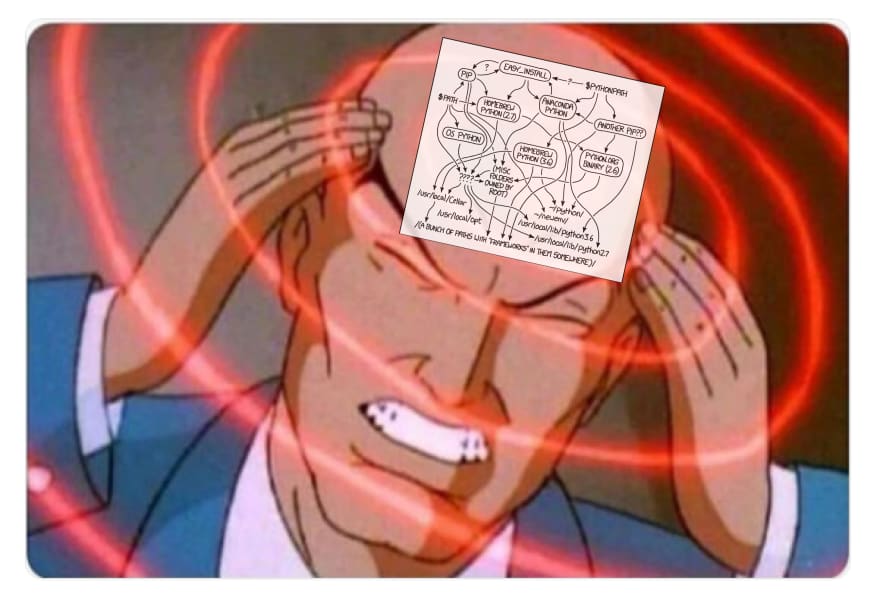 A big thanks to these guys for helping out with the feedback about illustrations:

Add a Feature Request💫 or a Bug🐞

Once suspended, dmitryzub will not be able to comment or publish posts until their suspension is removed.

Once unsuspended, dmitryzub will be able to comment and publish posts again.

Once unpublished, all posts by dmitryzub will become hidden and only accessible to themselves.

If dmitryzub is not suspended, they can still re-publish their posts from their dashboard.

Once unpublished, this post will become invisible to the public and only accessible to Dmitriy Zub ☀️.

Thanks for keeping DEV Community 👩‍💻👨‍💻 safe. Here is what you can do to flag dmitryzub:

Unflagging dmitryzub will restore default visibility to their posts.