As iOS developers, we tend to use many delegates, sometimes even abusing these poor little fellas. But, what else can we use? Right?

We know a few other options, but they might feel awkward or a bit of an overkill, depending on what we want to accomplish.

If you've been programming in iOS before introducing the UIAlertController (iOS 8), you probably used its predecessor alert, UIAlertView. One of the most noticeable changes between these two alerts is the way they interact with their caller. TheUIAlertView notified the view controller about the button events using delegates, while the UIAlertController uses a closure of type ((UIAlertAction) -> Void)?. In my opinion, this change was a significant improvement, which provides developers a cleaner way to implement the alert.

In this tutorial, we will create a simple "note-taking" (almost useless) app. We will be using the closure pattern as an alternative to the frequently used, practically abused delegate pattern.

What you'll need for this tutorial

But, what the heck is the buttonAction variable type?

The buttonAction variable is of type ((String?) -> ()) meaning the variable is a function (just like blocks in Objective-C). This approach is possible in swift because functions are first-class citizens (often call first-class objects).

Let's discuss each part of our buttonAction type: ((String?) -> ())?. To make it very clear, let's identify each part of it.

It’s important to notice that ((String?) -> ())? is of type optional. therefore ViewController not necessarily needs to implement the buttonAction variable. In case the variable is not implemented (buttonAction == nil), the SecondViewController will only be dismissed.

Let's implement the buttonAction variable on the ViewController. Add the following code on the ShowViewController(sender: UIButton) method just on top of the present(...) line.

If you try to run your code now, you should get an error like this one: 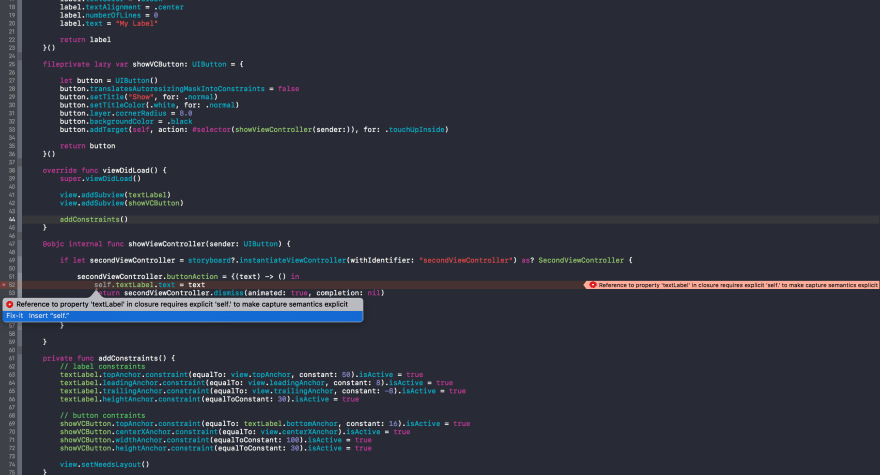 This means that we need to add the Objective-C extremely used self on our textLabel variable. To avoid a reference cycle, instead of referencing self directly, we will use capture list and reference weak self instead.

Right, it's not required anywhere else on the ViewController, but we are now inside our closure declaration, and inside closures, you need to reference self. It's a good practice to use [weak self], [unowned self], or the property that you will reference inside the closure ([textLabel] in this specific case) to avoid reference cycles. If you use the property instead of weak or unowned, you don't need to use self.

The error must have disappeared by now, and you should be able to run the project and test everything you just did.

Coming back to our buttonAction, as we mentioned before, it is a closure, and closures are like functions.

So, we declare the variable to a function with a variable text and a return value of type (), which is the same as Void.

Most of the time, iOS programmers overuse delegates since they don't like the Objective-C block syntax (not my case, I used to love that weird syntax). This article demonstrated that it is possible to use a closure to pass information from one view controller to another.

We just used closure to pass information from one view controller to another. As iOS developers (and if you are coming from Objective-C), we sometimes used the Delegate pattern a lot.

Some people didn't like Objective-C block syntax (I used to love that weird syntax, though).

Now, with Swift closures, we can set aside those good ol' Delegates.

Can This iOS Dev Build a Chat App in Just 5 Minutes?

David
iOS engineer
Use No-Code REST API Security Testing
#tutorial #programming #security #discuss
We are trending on Github, This is how we did it 🤯
#discuss #javascript #webdev #productivity
How do you safely share passwords?
#discuss #security #productivity #webdev

Once suspended, dmlebron will not be able to comment or publish posts until their suspension is removed.

Once unsuspended, dmlebron will be able to comment and publish posts again.

Once unpublished, all posts by dmlebron will become hidden and only accessible to themselves.

If dmlebron is not suspended, they can still re-publish their posts from their dashboard.

Once unpublished, this post will become invisible to the public and only accessible to David.

Thanks for keeping DEV Community safe. Here is what you can do to flag dmlebron:

Unflagging dmlebron will restore default visibility to their posts.