Unlike the queue, the stack and the linked list, the graph is a non-linear data structure, similar to the tree. It is composed of a collection of nodes which are connected to each other. The connections are called edges and can be either directed or non-directed. The edges can also have weights associated to them. These could represent distances, times or any other kind of information which describes that connection. 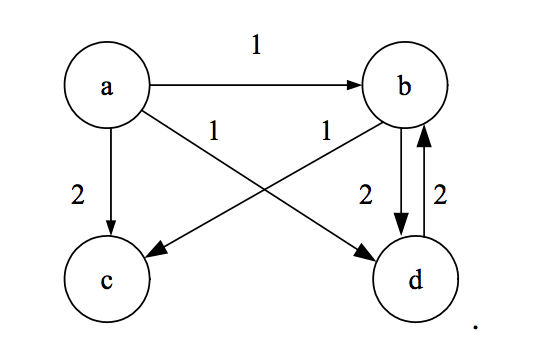 As with the other data structures, there are several types of graphs and I had to make a choice here. Eventually I decided to implement a weighted directed graph. This means that every edge is going to have a direction and a weight associated to it.

To start with we created a struct which will hold the references to all the nodes in the graph. The order of nodes in this slice is going to be important because the index of the graph is going to also be its ID.

Next we created a struct for an individual node. A node will have an id field and an edges field which is a map of node IDs and weights.

As always we add a constructor function.

Now we are going to add the following methods: AddNode, AddEdge, Neighbors, Nodes and Edges.

The AddNode method is going to add a new node at the first empty position of the Graph's nodes field, which is going to be equal to the length of this field. The return value is going to be the new id.

For AddEdge we have to pass the IDs of two nodes in the order that we want the direction of the edge to be in, and the edge's weight.

Next, the Neighbors method is going to iterate through all nodes and their edges to find the neighbors of a specific node ID. This is the most expensive function of all.

Then we create a method Nodes that is going to list the IDs of all nodes.

And finally, we create the Edges method which is going to list all the edges as a slice of arrays, which contain the ID of the start node, the ID of the end node and the weight of the edge.

A good next step when studying graphs is to also implement a search/traversal method. You can choose between BFS (breadth first search) and DFS (depth first search). But I will leave this to you ;)

A collection of data structures implemented in Go

Build a fullstack app with Go Fiber, Docker, and Postgres

Once suspended, dorin will not be able to comment or publish posts until their suspension is removed.

Once unsuspended, dorin will be able to comment and publish posts again.

Once unpublished, all posts by dorin will become hidden and only accessible to themselves.

If dorin is not suspended, they can still re-publish their posts from their dashboard.

Once unpublished, this post will become invisible to the public and only accessible to Dorin.

Thanks for keeping DEV Community 👩‍💻👨‍💻 safe. Here is what you can do to flag dorin:

Unflagging dorin will restore default visibility to their posts.