As you probably know, Microsoft has started to announce the arrival of the new version of its programming language: C# 11.

Among many other things, they have revealed many new features of this version will bring and as I have already commented the best features in other posts, today we are going to see the features that you might have missed because little has been said about them or because they have not had so much hype.

Generic Math is a feature that Microsoft introduced in .NET 6, but now with the arrival of .NET 7 they have implemented many improvements and that is why we are going to talk about it. With Generic Math you can take full advantage of operators and static APIs by combining static virtuals and the power of generics.

One of its major advantages is that it allows you to restrict the input to number like types avoiding having many similar implementations (if not almost identical). Besides, now you will be able to use different operators from generic contexts.

In addition to this new feature, generic math support has been added with different features such as:

Thanks to this, it will now be possible to add static abstract members with overloadable operators (or static properties or members) to define interfaces.

And that’s not all, now some different requirements have also been created due to generic math. These requirements are divided into 3:

If you want to know more about this feature, I recommend you, as always, to consult the original source: Microsoft C# 11 Generic math support

This new feature adds to the nint and nuint integral numeric types as aliases System.IntPtrandSystem.UlntPtr.

The two types nint and nuint are native-sized integers. The thing is that they are native if, for example, they are 64-bit integers and run in a 64-bit process. The same as for 32-bit scenario.

Another advantage is the performance optimization in scenarios where integer math is used and they can also be used in low-level libraries and interop scenarios.

In the following table you can find all the Integral numeric types: 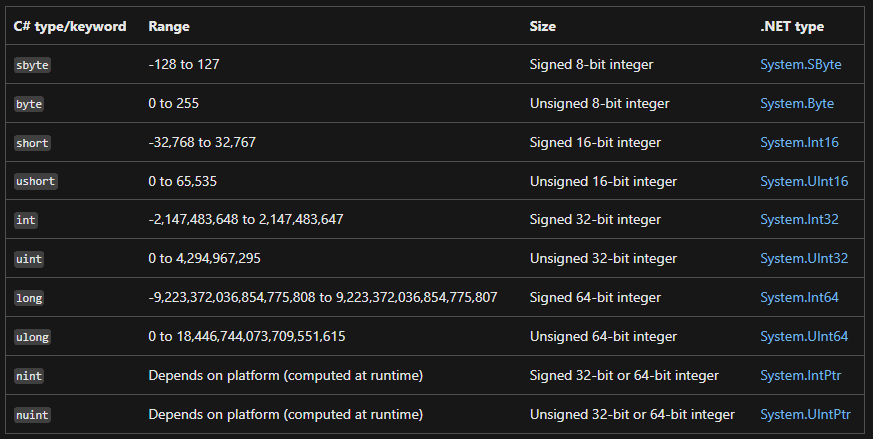 If you want to know more about this feature, I recommend you, as always, to consult the original source: Microsoft Numeric IntPtr and UIntPtr

This C# 11 feature is a bit more compiler focused. For those who don’t know, a varibale of a struct type contains all the data of that struct. So you can easily distinguish if a struct is initialized, if it is uninitialized or if it has a default value. Let’s see the Microsoft example:

The structure-type array instantiation generates an array with the default values of a structure type while ignoring the parameterless costructor.

If you want to know more about this feature, I recommend you, as always, to consult the original source: Microsoft auto-default struct

As Microsoft tells us, since a couple of C# versions ago, using pattern matching you could check if a particular string has a specific constant value. Now in C# 11 opens the possibility to use the same logic for pattern matching ReadOnlySpan and Span variables.

If you want to know more about this feature, I recommend you, as always, to consult the original source: Microsoft pattern matching

The function of nameof expressions is to generate the name of a type, variable or member as a string constant. Besides, it does not affect in any way at run time since it is evaluated and executed at compile time.

One of the utilities of the nameof expression is to maintain the argument checking code. Let’s look at the following Microsoft example:

With the new version of C# it will be possible to specify the name of any method parameter in an attribute of the method declaration using the nameof operators.

This makes it possible to easily add attributes for nullable analysis.

If you want to know more about this feature, I recommend you, as always, to consult the original source: Microsoft extended nameof scope

All these new features in C# 11 and all the work Microsoft is doing for C# is amazing. This is not a minor release, this is a very big release and at least for me, we are in front of one of the biggest updates of the C# language.

If we remember the principles of C# until today, that we can develop from desktop applications, through web applications to mobile. And let’s not forget that C# is also a popular game developing programming language (Unity).

Of course, there are still a couple of months to go before the official release of C# 11 and knowing Microsoft, we are sure that it has something else to surprise us until then. What do you think in general about C# 11? Was it what you expected? Do you miss any feature or better?

Once suspended, dotnetsafer will not be able to comment or publish posts until their suspension is removed.

Once unsuspended, dotnetsafer will be able to comment and publish posts again.

Once unpublished, all posts by dotnetsafer will become hidden and only accessible to themselves.

If dotnetsafer is not suspended, they can still re-publish their posts from their dashboard.

Once unpublished, this post will become invisible to the public and only accessible to Dotnetsafer.

Thanks for keeping DEV Community safe. Here is what you can do to flag dotnetsafer:

Unflagging dotnetsafer will restore default visibility to their posts.