For those of you following along, sorry it been nearly a month since the last post in this series! I did start the series having everything already completed and it became evident that I still had some learning to do! Good for learning, bad for regular blog posts. I wrote this post because of all the learning:

Getting Ready for the Frontend

Ok. The first thing we need to do is some housekeeping. (If you've been following along with me, we've got everything set up in a single folder. What I am going to be doing now is moving everything to a structure where the current files for the backend are in a "backend" folder while I have a separate "frontend" folder for all of that.

So, in the root of my project I added a backend folder and a frontend folder, then dropped everything that existed into the backend folder. I had to update all the require('') statements accordingly, but in VS Code it all happened automatically for me.

So now we've got this structure: 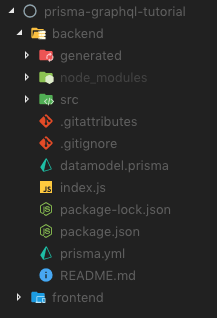 You should be able to go into backend/ in your terminal and make sure everything is working still by running nodemon index.js.

If everything is still good, I like to add a script in my package.json so I don't have to remember that command. In package.json, go ahead and add the following code. It will allow you to start up the backend server by typing npm run dev opposed to the nodemon index.js.

For this project I will be using Next.js. It's a really robust framework that offers a lot of nice things like server-side rendering for React. It's also easy to get started with because it has features like a pages folder, where all component in that folder become pages you can navigate to. It also has a nice way to link to other pages that's super easy so it's great for this purpose.

First, we need to go into our frontend folder, and we are going to install Next, React, and React DOM. In addition, we also make a folder for our components, the pages, and a lib folder for a high order component.

With Next installed, we can now do a number of things!

First, we need to install a few more things.

Next With Apollo: This is basically a component that we pass our Apollo Client to which will eventually wrap up our entire application.
Apollo Boost: Apollo Boost is just a package that contains the most-used Apollo client packages. Essentially there a many individual packages you can use, but most people use a core set, so they have them all as apollo-boost.

To make the HOC component, I created ApolloHOC.js in my lib folder.

So, let's walk through the code above. First we import next-with-apollo and apollo-boost.

Next we are creating the function createClient, which accepts headers (for SSR) and returns an instance of the Apollo Client. To that, we pass in the endpoint of our backend (the localhost:4000) as well as set the requests to include the header credentials with all requests, and also pass along those headers.

Basically, we need to pass the headers along with all requests (this is something happening from next-with-apollo) and also set credential to "include" so our app could do authentication if we wanted to. Overkill for this tutorial, but a good starting place for other projects.

Finally, we export the HOC withApollo that we require from next-with-apollo, passing in out Apollo Client.

Next, we need to create a custom _app.js file in out pages directory. This is pretty well documented in the Next.js docs but it essentially is where we wrap up our entire app with the withApollo component to expose our entire frontend to the Apollo Client. My custom _app.js is as follows.

Basically, the only difference between mine (above) and the example provided in the Next.js docs is that I also destructure apollo from the props and that gets put in the ApolloProvider as props. I don't actually remember where I found these examples, but the docs for the Apollo Provider explains wrapping your app. Alright, so now our components should have access to the Apollo Client!

Another thing that I do is create a custom _document.js. The custom document is to "Is used to change the initial server-side rendered document markup". Basically, I mostly use this to hook up Styled Components, but it seems like for server-side rendering it has a lot of uses.

I got his custom _document.js from the Next.js Examples with Styled Components

If you try and start everything up right now, you'll get some errors due to some peer dependencies going on. I also have styled-components required in the _document.js so, let's install the following:

To get ready for making out first graphQL query & mutation, we'll need a few basic pages. Go ahead and create the files addItem and viewItems in your pages directory and put in the following:

Check That Everything Works!

Ok, before checking that everything works, I will (same as the backend) go to my package.json in the frontend and add the script "dev":"next" and that will allow me to just type in npm run dev to start up the frontend.

You can now run npm run dev within the frontend and backend directories and be up and running! You should be able to navigate to localhost:3000/addItem to see "Add item form will go here" from our paragraph tag in the addItem.js file, and similarly for to localhost:3000/viewItems to see "Items will show here!".

Hopefully, everything should be good to go now! In the next post, I'll look at creating a GraphQL Query!

Once unpublished, this post will become invisible to the public and only accessible to Ryan Doyle.

Thanks for keeping DEV Community 👩‍💻👨‍💻 safe. Here is what you can do to flag doylecodes:

Unflagging doylecodes will restore default visibility to their posts.