In this guide, I am going to cover the essentials in terms of getting up and running with MongoDB. The best way to start learning new technology is to jump straight in and start using it. Therefore, after a brief introduction to MongoDB, the following sections are all about setting up your own MongoDB instance using 4 different hosting methods. Next, I introduce 5 tools that you can use to work with your MongoDB databases. The next section illustrates methods on creating your own database and collection with data. In this section I also provide a number of examples that illustrate some basic queries to query your data.

This guide is summarized as follows:

Lastly, this guide does not cover the reasons to use MongoDB (perhaps a guide for another time). However, I would like to encourage readers to spend some time researching and understanding the rationale between choosing a NoSql database over a Sql database. MongoDB is not a replacement for SQL databases. It is merely an alternative that may (or may not) align better with ones specific requirements.

The following question posted on Quora may be a good starting point:

What are some reasons to use traditional RDBMS over NoSQL?

From my personal experience and perspective, I will mention that one should think very carefully before committing to a NoSql database if your data is required to be agnostic. In this case I have found Sql databases to be a far better choice due to the simplicity of modelling data and exposing it in many different ways for many different applications.

The original guide can be found on my Github repository. Like my Docker Guide, I will be updating and adding more content over time to this repository.

MongoDB is a database. More specifically, it is an open source document-oriented database that has been designed for scalability and simplicity for both developers and sysadmins. Traditional relational database management systems (RDBMS) like MSSQL, Oracle, MySQL, and PostGreSQL store data in tables having a static schema composed of rows and columns. However, MongoDB stores it's data in JSON-like documents having dynamic schemas.

I will discuss 4 options to get up and running with MongoDB:

Installing MongoDB is relatively straight forward. There are currently 3 platform (Windows, Linux, OSX) releases available and can be found here

If you have never used Docker before, then this option is less suitable for you as it implies having some Docker knowledge and experience. However, if you are still interested in pursuing this option, then I recommend viewing my Docker Guide as a starting point. I also have a Docker Cheatsheet that you may find useful.

The Docker image that will be used, is the official Docker MongoDB image.

For the following examples I map the Docker MongoDB port of 27017 to a local port of 37017. The reason for this is because I have a local instance on MongoDB running that is already using the 27017 port.

To run a new MongoDB container, execute the following command from the CLI:

There are 2 steps to accessing the MongoDB shell.

This will open an interactive shell (bash) on the MongoDB container.

MongoDB Atlas is a Data as a Service (DaaS) offering, and is hosted in the cloud. There is no installation of MongoDB required and a free tier is available.

To get started, signup for free by registering for a free tier account here. The free tier entitles you to 512MB storage.

Once you have registered and setup your MongoDB instance on Atlas, you will be presented with a dashboard resembling the following image: 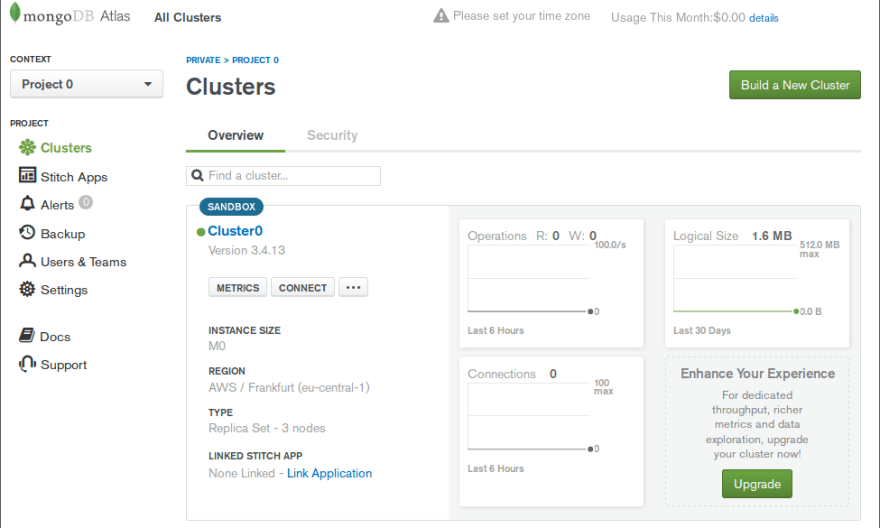 MLab is a Data as a Service (DaaS) offering, and is hosted in the cloud. There is no installation of MongoDB required and a free tier is available.

To get started, signup for free account here. The free tier entitles you to 500MB storage.

Once you have registered and setup your MongoDB instance on MLab, you will be presented with a dashboard resembling the following image:

The tooling for MongoDB has improved a lot of late and there are many options. I have worked with the following tools and I find them all quite good. It's really a matter of personal preference but I find that I tend to use them together.

The MongoDB shell is the default way of interacting with MongoDB databases.

MongoDB Compass is a Graphical User Interface (GUI) tool that allows one to explore your MongoDB data.

In the following screenshot, I am connected to MongoDB running on my local machine, using MongoDB Compass. 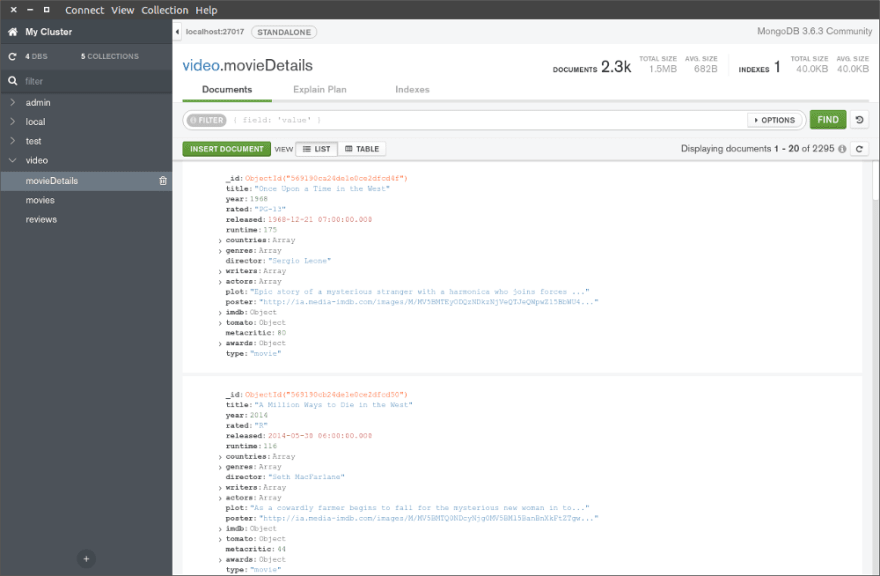 NoSqlBooster is a Graphical User Interface (GUI) that provides an easy to use interface to work with your MongoDB database.

In the following screenshot, I am connected to MongoDB running on Docker, using NoSqlBooster. 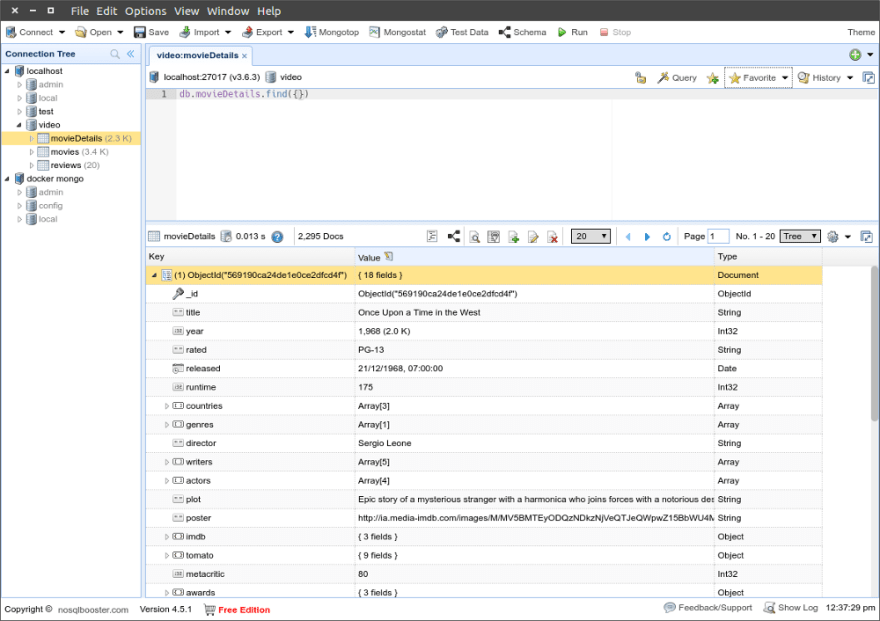 Robo 3T, is a free GUI tool that can be used to explore your MongoDB databases.

In the following screenshot, I am connected to a local instance of MongoDB using Robo 3T: 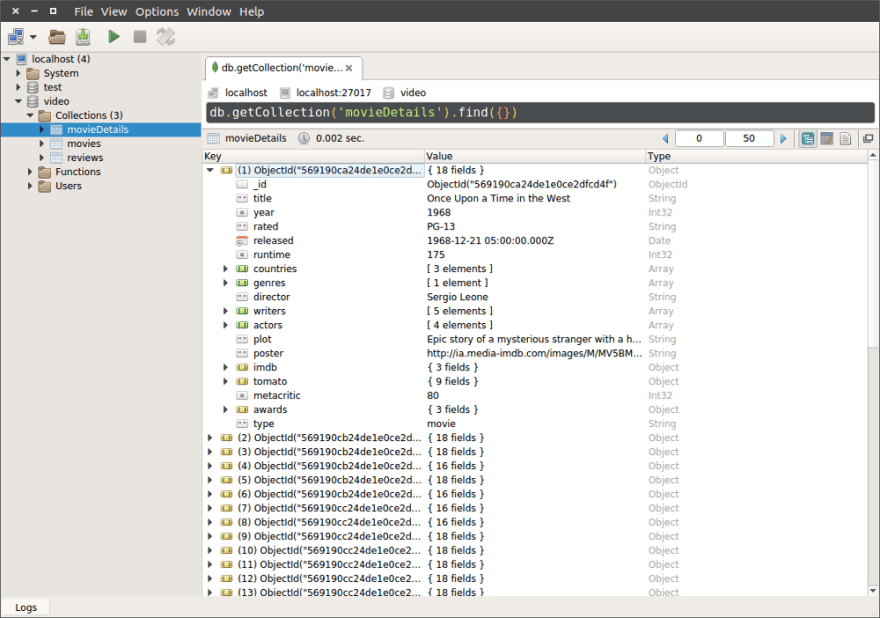 Robo 3T can be downloaded here

Connect To Mongo On localhost

To connect to MongoDB instance, follow the following steps:

The steps are shown below:

To use the 'ScrapBook Feature', follow the following steps:

The steps are shown below:

At the time of this writing, there seems to be an issue with Mongo ScrapBooks

Once you have your MongoDB instance running or hosted, open a mongo shell to your MongoDB server. For the purposes of this demonstration, I will be using my local installation 'localhost'.

This has been a quick introduction to getting started with MongoDB. In this guide we learned about 4 different ways to host your MongoDB instance. We also learned about 5 different tools that can be used to manage your MongoDB databases. Lastly, we explored some basic queries that can be used to create a database, create a collection, insert data, update data, and fetch data.

MongoDB is an exciting and relatively new database that has a massive community and knowledgebase. I encourage all those that are interested to get involved by trying out the following learning resources:

The following MongoDB book is my personal favourite:

If you're interested in certification, please see the MongoDB Professional
Certification Program.

Once suspended, drminnaar will not be able to comment or publish posts until their suspension is removed.

Once unsuspended, drminnaar will be able to comment and publish posts again.

Once unpublished, all posts by drminnaar will become hidden and only accessible to themselves.

If drminnaar is not suspended, they can still re-publish their posts from their dashboard.

Once unpublished, this post will become invisible to the public and only accessible to Douglas Minnaar.

Thanks for keeping DEV Community 👩‍💻👨‍💻 safe. Here is what you can do to flag drminnaar:

Unflagging drminnaar will restore default visibility to their posts.