The first time I spoke before a professional crowd was about three years ago at a meetup called Geek Night conducted by ThoughtWorks. It was a monthly meetup where software developers from local community give talks, share their thoughts by networking with one another.

During those days I just graduated out of my college and was working as an Embedded Engineer which means I knew nothing about software(I.T), All things I knew was micro controllers, Jtag debuggers and Embedded C. Also, I've never been to meetups, When I heard of this, It got me excited. More over attending that meetup, I wanted to present something there a.k.a give a talk. But wait, The audiences were software guys, and I knew nothing about software, I am an electronics guy (At least I was, Now I am a Backend/Product Engineer helping an A.I startup to scale their products). So, given that I had to choose a topic which will benefit the audience as well as something which I am comfortable to talk with and answer questions to.
Finally I came up with a topic that can bridge the gap between developers and makers, those were the early days of raspberrypi board in India, So I decided to talk about it as I owned one and used it for hobby electronics. And I carefully drafted my topic: "A credit card sized linux machine", so that my proposal shouldn't be considered as less relevant by the developers who are selecting it.

I showed up, I spoke, things went well. Infact to my knowledge 3 of the audiences bought raspberrypi after my talk and I worked with 2 of them in my second startup, Still working with one of them in my third startup.

Okay enough of my story, Now I talk regularly at local meetups and I went as a speaker to few big conferences. Given that I am no expert in public speaking, my heart beat rises and occasionally words scramble as I am on the stage. But still, I will give you some reasons, why you should speak at conferences or at least attend them.

Its not about learning, its about "Learning what to learn" 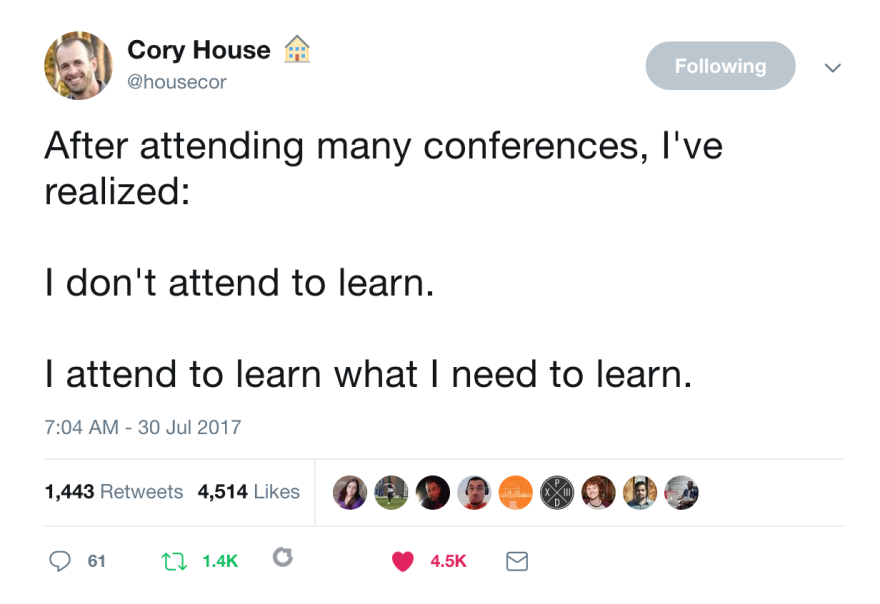 One of the influencer from Microsoft tweeted that attending conferences will show you the path to what to learn next. He is right, because honestly people can't remember everything from all the talks (at least in my case). Usually there will be around 6 to 8 talks in a day at any given conference, So when you are presented with that much information on different topics in a single day, you won't learn much as your brain will be overwhelmed with information. This is the reason why all the conferences provide a notepad and pen as a part of their goodies. You can jot down the important take aways and revisit them later. Now you have notes on all the talks and speaker details, either you can go through them whenever you want or if you decide to learn something further in a specific domain, you will know which conference notes to refer to because the note will ultimately have the trending tech in that domain with other people's experience on it.

I usually use Evernote for this. It is easier to search in digital notes, take the picture of the slides and attach to notes whenever you want. In addition to that, as a programmer who spends half of the time using his google search skills, Evernote shows up relevant notes aside the search page. 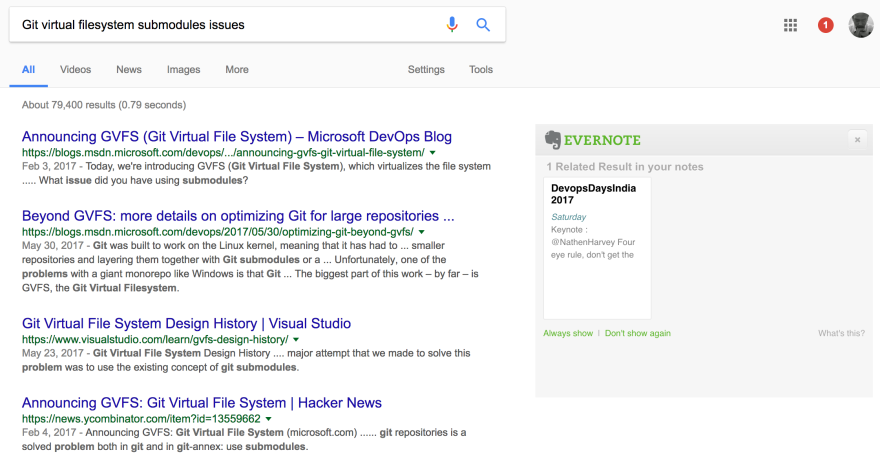 As you can see, my evernote shows a relevant note I took from a conference when I search for some term. Now I can recollect about what happened in that conference, what can I learn next or even ask for help from the speaker through twitter. 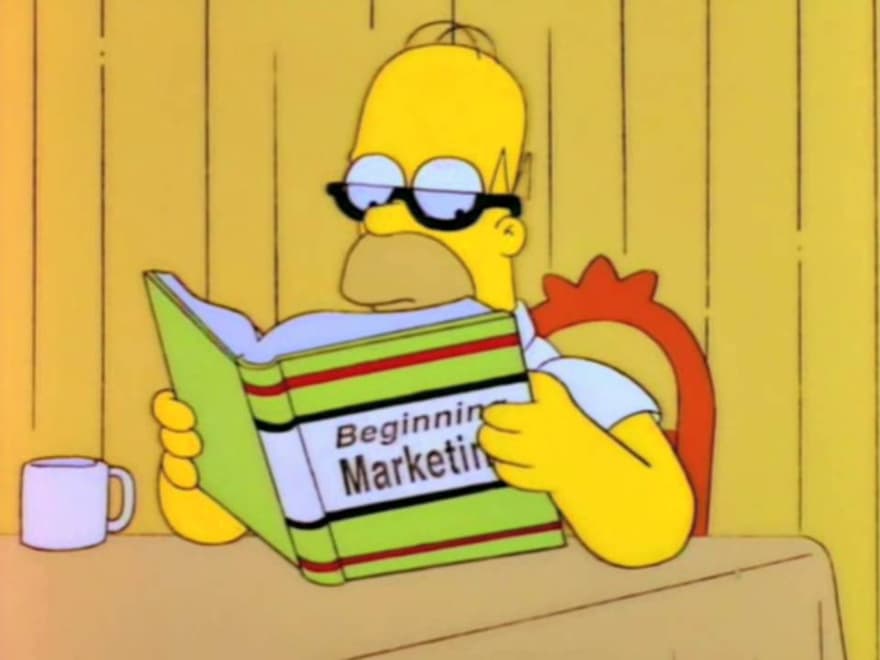 Imagine, two startups A and B are developing similar products and they are competing with each other. Startup A has 80 hours of work week, hires highly skilled developers and all are so invested in developing the product in a rapid pace.
On contrary, startup B hires few sales and marketing people along with the developers. Invests some time as well as money in marketing. While developers are concentrating on the product, the marketing team is concentrating on getting leads, pitching it to clients and spreading the word about the startup and its products among the community. After sometime in the market, when both startups launch their products, ultimately people's eyes will be on startup B as they already let the community know what work they are doing, collected information on whats happening in the market, feedback about their product and iterated their product development based on that. While startup A was simply developing the product assuming that people will buy/use it after launch.

By now you should've got what I am trying to convey. Yes, you are your marketing team. See how startup B spread the word, got feedback from the community, learnt whats happening in market and iterated their product based on that?. Similarly if you attend conferences, you will get to know whats happening in your domain, what kind of skills your peer engineers have, what skills you need to learn to catch up with the market and so on.
It is a big plus if you speak at conferences because people in your domain will get to know you, what skills you have, what work you do, et cetera. Who knows, a CEO might be in sitting in the audience secretly planning to hire you for her next project. But If you are like startup A, working your ass off 80 hours per week and hesitating to invest in conferences, even though you end up having good skill sets people won't know about you. And you won't know whats happening in your market or domain. You might be acquiring a wrong set of skills the whole time where your market and community is going in different direction.

Giving back to the community

Do you know that somewhere, some programmer is spending so much of his/her time on writing the library or programming language you use day to day?. So that you can do from numpy import array and make a business out of it?. And the outstanding part is that the programmer is releasing her work for free (as in the free beer) for the community to use. Nowadays most parts of the tech stack in a startup uses open source software. Unlike the startups or business which runs on money, the open source software primarily runs on community.

Community are the people who selflessly create open source softwares, contribute to them and support its development. You can give back to the community by contributing to the project that you use for free, but hey! I know, we all have tons of excuses. We don't have time to contribute to it, Our boss fills up all our schedule with office projects. But still there is a way.

The people attending conferences are also a part of the community. So, If you are getting on the stage, sharing something useful from your experience, spreading the knowledge, then you are actually doing your small part in the FOSS world by "giving something back to the community".

Coming out of your comfort zone 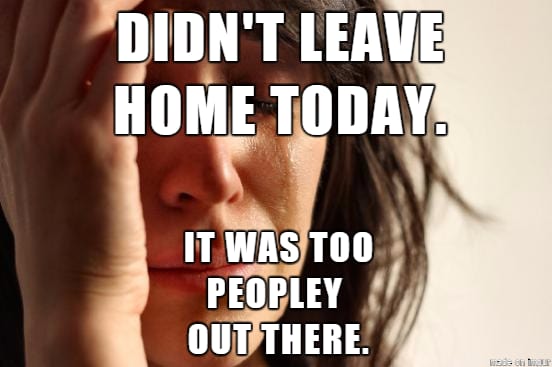 Agoraphobia – The fear of open or crowded spaces.

According to the internet, Agrophobia is one of the top 5 phobias in the world.
It is way easier to read a blog post by sitting in your private room or listen to a podcast without breaking a sweat. You don't have to do small talks while your YouTube video loads up.

But going to conferences and speaking before audience is a different deal. Even if you are not speaking, Starting relevant conversations during the networking sessions instead of awkwardly staring at people is an essential skill one should learn to survive the market.
Some people are born with those networking skills, but people who don't have that (like me), they should learn it by themselves, they should put themselves out in the crowd and get out of their comfort zones.

Dev Retro 2022: What made me a better developer?

How to Make Money With a Tech Career

Once suspended, dudewhocode will not be able to comment or publish posts until their suspension is removed.

Once unsuspended, dudewhocode will be able to comment and publish posts again.

Once unpublished, all posts by dudewhocode will become hidden and only accessible to themselves.

If dudewhocode is not suspended, they can still re-publish their posts from their dashboard.

Once unpublished, this post will become invisible to the public and only accessible to Naren.

Thanks for keeping DEV Community 👩‍💻👨‍💻 safe. Here is what you can do to flag dudewhocode:

Unflagging dudewhocode will restore default visibility to their posts.