One of the goals I set to myself for this year is diving into public speaking.
There is no special reason behind it. I am not in a leadership position nor my company is planning to send me to do PR at some conferences. I just felt it would be good for myself in general.

I already had the opportunity in the past to speak in front of small audiences, but mostly it was technical workshops during the onboarding of new employees or short presentations to present a topic to my or others team. The public was limited to 5 to 15 people, the content was strictly relying on documentation/slides and format more something like a "boring" lesson, than a speech.

A bit more than 2 years ago I had the chance to join a presentation from our Tech Lead when he wanted to present the entire Engineering department his revolutionary ( at least for our company ) new approach to development and delivery. Within a 45 minutes talk, I could step in with my stunning contribution of 4 minutes and 3 slides in total. No real stage, still it was in front of 80 people, I had a microphone and a huge screen behind my back. It was thrilling.

Over the last two years, I have visited many Meetups about React / Node and Serverless and every time I was thinking about giving some presentation about something interesting I worked on or fun that happened in my career. As a new year resolution I decided to start again with some more presentations at work and I plan to give a talk at a Meetup within the end of this year or first quarter of next year. Let´s see.

Almost by chance, I found out about Toastmasters ( called Powerspeakers in our Hamburg district), which is an awesome place to meet very interesting and inspiring people, while practising public speaking (as well as giving and receiving feedback). I will definitely write another post about why if you are interested in public speaking, leadership or just personal development, in general, you should really get in touch with your local Toastmasters group.

Anyway, as part of the learning path, I had to give an introductory speech to other members: I had to tell a story, for about 5 minutes, no slides, no tech topics, no notes. Very different from my past experiences, very challenging and very motivating.

I had something in mind, but I had no idea how much I could / should write to be able to speak for the allocated time. I wrote down a script and then checked with a tool like WordCounter how many words/chars the text was and with SpeechInMinutes to approximately know how long it would take to actually say it ( considering an average of 130 words per minute).

Well, I definitely wrote too much! The estimated duration was over 9 minutes, but for my "Icebreaker", that´s how the first speech at Toastmasters/Powerspeakers is called, the duration must be minimum 4 and 6 minutes max.

I trimmed out some stuff then started rehearsing. Shaved off some other parts and rehearsed. Again and again, until I got slightly below 6 minutes.
At first, I just read out loud, practising the flow, the pauses, the pitch and of course trying to memorize the text. Then I practised the body language and eye contact: I started repeating my story walking around the room and trying to look at an imaginary audience. I tend to move and sway and gesture a lot (well, I am Italian, after all), and when nervous I tend to stare at the ground, all things that you want to avoid while public speaking.

In the end, I rehearsed a couple of times in front of my wife and kids, ( who were very happy to position all their cuddly toys everywhere in the room, just to increase the audience) 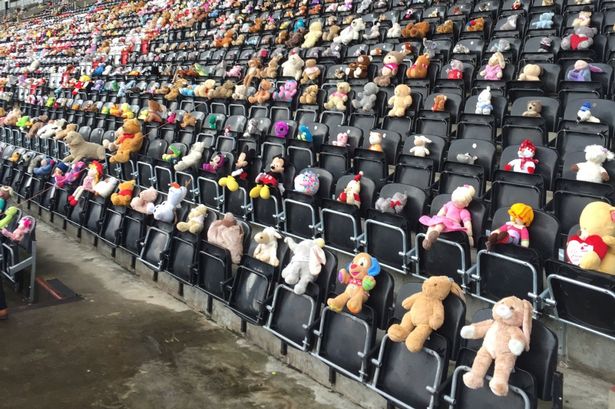 Since I am an obsessed perfectionist and I knew I was going to be very nervous I practised a couple of more times while doing something else, like riding the bicycle and washing the dishes. I wanted to be sure that nothing could distract me and break the flow of the speech.

Every time though, I tried to change some words, or slightly modify the script, so that it felt more natural ( and so that if I would forget something during the speech I would not start worrying: "Oh God, I forgot that word, now I messed it up, I am stuck!!") .

The evening of my first speech I was of course very nervous, well actually, the day of my speech - and the night before.
I knew that I was prepared - I knew the script inside out and I am very passionate about the topic I chose - nevertheless, the stage fright is somehow unpredictable and I was worried I might black out, start to stutter, be stiff and look like an idiot.

As I was approaching the venue and just until the very moment I was announced and step in front of those 15 people ( the club was not very crowded that day) I had the usual symptoms: dry mouth, accelerated heart rate, and queasy stomach, but that is something you forget quickly when you start speaking. I am not saying that then everything disappears, I definitely was way more nervous that I wanted to be, but that is nothing compared to the "anticipation".

The speech was quickly over, I exceeded the allocated time of about 15 seconds, but that´s not that bad.
Then it was the time for the feedbacks. During the speech there are many evaluators paying attention at your "performance":

On top of that, every member has 1 minute to fill up a small form about what the found good and what not.

The comments that I got were all spot on and very useful: try to be more natural, have more fun and be more relaxed, smile more, speak up louder and increase the variety in pitch and rhythm but overall the comments were positive, especially for an Icebreaker.
Actually, the biggest critic I received, was that for an Icebreaker speech I did not really speak about myself - the topic was interesting and pretty well delivered but the objectives were not really met.

The funny thing is that the "personal" parts of the speech, where I was going into details about my personal background and about my feelings were indeed in the original script, but then I trimmed them off one by one after every rehearsal trying to squeeze the script in the required duration: "who cares about that, anyway! Let's stick to the useful information" - I was thinking...

Overall a very nice experience which I plan to replicate more often until I decide to really take the leap and apply for a Tech Speech at a local Meetup. (and of course in the meantime - going back to do as many short presentation and workshop at work). 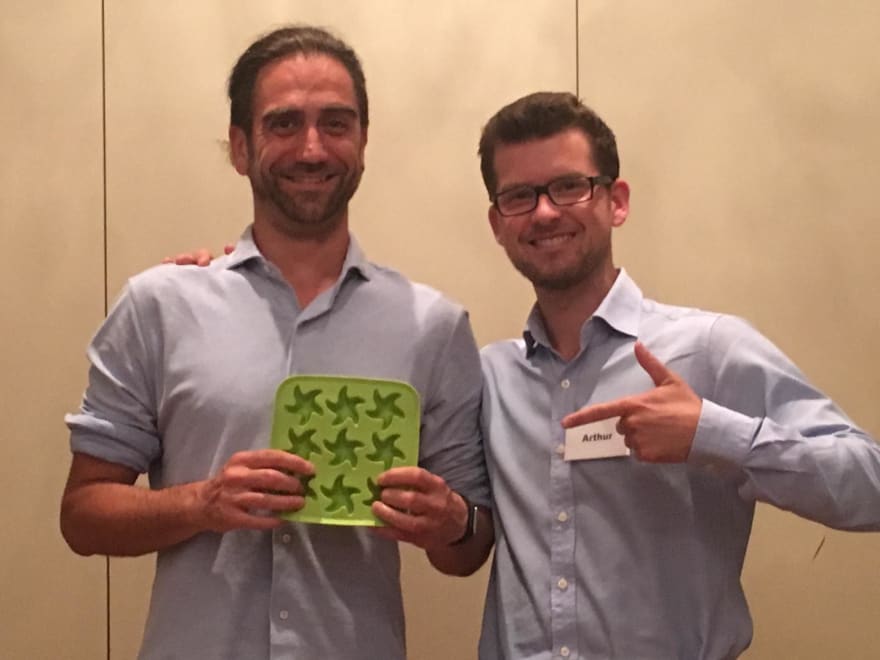 This is me with the President of our ToastMasters Club here in Hamburg at the end of the Evening with the prize each new member is rewarded after giving their first speech (called the Icebreaker).

Tools Every Developer Should Know and Use

How programmers love to code?

How streaming Live Coding made my life better

My freelancing workflow, from cold leads to paid invoices