tl;dr - Vest is a new validations framework I have been working on. I believe it makes validations a little bit cleaner and easier to maintain.

One of the problems that I see repeating the most in many projects is related to form validations - regardless of whether the project uses one framework or another (or not at all).

I’m not saying that validating forms is difficult or complicated, but that it’s really easy to write them in ways that will lead us into trouble down the road.

I am trying to solve it with Vest (Validation tEST), an open-source project that I have been working on, and has proved its effectiveness in my previous workplace over and over again.

Before I elaborate about Vest itself, I’ll try to touch on the main problems I see in the world of validations.

After a while, validation logic tends to grow and be filled with spaghetti code:
In the beginning, when we write a new feature with forms, we make sure everything is clean and tidy. Many times what happens is that a new product request arrives and adds or changes features in that form that changes the technical design of the feature itself. What we usually do to finish on time is just bash it in until it works. After a while, this becomes an unmaintainable monster.

Nothing is reusable:
The way people usually write JS validations is pretty much like this - we have an input and some change handler that takes care of it. We usually write it along with the form itself, because that’s where it makes the most sense. But what about validation logic that repeats in different places across the site - such as password, or email?
Since we write our validations inside our features itself, we can’t easily use it in other places, and what we do is make an overly generic function that takes care of too many stuff, or copy/paste our logic and make it a maintenance nightmare.

It is very hard to refactor features:
When we write our validations they will usually be tied to the framework we’re using, this leads to the fact that if we ever want to make a change, such as update or replace the framework we’re using, or just refactor the feature, we can’t do that without re-writing our validations from scratch.
These are not the only ones, and of course, not every one of them is relevant in every scenario, but I am sure there is a general agreement that working with form validations can very easily lead to a big mess - even if not always.

Vest is an open-source framework I have been on for the past couple of years. I implemented its early versions in my previous workplace, and it helped a lot with bloat and maintainability.

Vest introduces nothing new, really, but it tries to re-think form validations with structures you are already familiar with. With Vest, we structure our validations with unit-test-like syntax that's completely separate from our feature code. 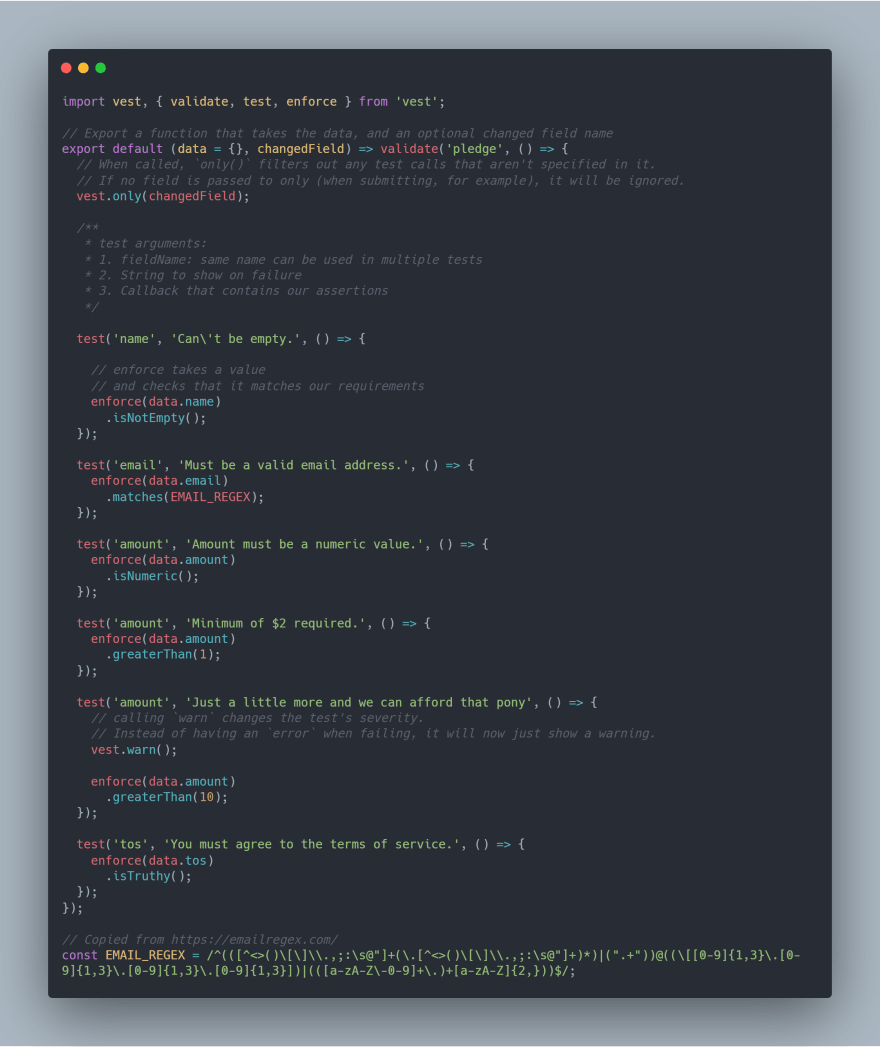 The idea is to not worry about which framework we use, or what is our feature structure. We look at our validations as a series of tests that our data needs to go through to be considered valid.

The syntax is simple, intentionally similar to what you would expect to see in testing frameworks such as Jest and Mocha, only that instead of describe/it/expect, you use validate/test/enforce.

Vest provides you with a large set of tools and features to describe and manage your validations, you should look at the documentation for a full list - but here are some of the more useful ones.

If you find any of these interesting, I would really appreciate it if you gave Vest a try. It helped me and others when working on features, you might find it helpful as well.