The last blog from the Foundation Ghost, "After 5 years and $3M, here's everything we've learned from building Ghost", was an eye-opener for me.

Not only the company model: a Foundation whose owners will not be able to sell, on purpose; but especially the actual love behind the product:

when we do anything you can be absolutely certain it's in the sole interest of building the best product we can for the right reasons.

Coming from WordPress, having played with Jekyll and Hugo, I could only take the bait to try Ghost. Therefore, I happily threw myself into the doc and the installation process to get a taste of the product.

The overall objective of this (short) series of blogs is to be able to spawn easily multiple (independent) ghost blogs on one's beloved server.

It's intended for developers/ops that wish to put their hands into the mechanics of Ghost, and need to easily spawn/kill blogs here and there.

I will not go through the code of the blog itself, neither on the topics of writing blogs, nor creating a theme. I will limit my sharing to the installation-side of Ghost, and how to facilitate/automate the process.

Would you not feel like a devops at the end of the day, you might find better value in the Ghost(Pro) service, which will do a much better job of hosting your blogs, and keeping them running and up to date.

In this first (of a few) blogs, I will focus on the installation of instances on localhost. The purpose is to set up locally a sandbox, as similar as possible as what we will ultimately have on production (hopefully).

There I went on my way, clicking on the Developer > Documentation link of the Ghost website, scrolling a bit down, and finding the expected entry point for setting up things:

After clicking on the Setup box, I had the choice between "I want to install Ghost on my own server" and "I want to try Ghost out quickly". I thought I was very lucky and I clicked on the second option: local install guide.

The TL;DR version of local installs, is you want to make use of Ghost CLI's super handy command: ghost install local

From there I stumbled on

I quickly switched to one of my server running Ubuntu, where it was also quite painful to get all the versions aligned... At the end of my 10mins timebox, I could not make the ghost-cli execute itself properly.

I (quickly) switched again for a Docker image, and there you go...

There is an official image (i.e. maintained by the DockerHub staff) on the docker hub, ghost, with a few examples of the commands available.

Back on my Mac I created a simple Makefile:

if/when copy-pasting, make sure to use tabs for the indentation (not spaces)

Running make was the only thing left to get my blog running on http://localhost:3001

A quick explanation on the arguments passed above:

A bit of cleaning up

Before next step, you can stop the containers with docker stop ghost-local another. However, the data will not be lost thanks to the volumes.

Moreover, they will be used again the next time you start a blog with the same name.

My initial objective achieved, I went for the bonus...

The first one was to be able to serve on port 80, and to have the blogs sit on different paths. Something like

I have my so humbly called "prod-stack" repo that provides me with this kind of routing functionalities (among others). It is based on Traefik (and NGinx), and allows me to quickly set up a proxy, a DB and a memcached.

It's running on my Mac, therefore making this solution free for me. I could only buy it :)

For you dear reader, I have taken advantage of this blog to open my prod-stack on github, and I also have done a bit of curating with the Readme (even though it is still more a draft than a real documentation).

Here is the fast-track setup to pull and run all docker containers:

Once the logs stabilize, you can Ctrl-C to get back on the command line, and docker ps to check that the stack is running.

The Traefik dashboard will be available on http://localhost:8081 with the user test/test 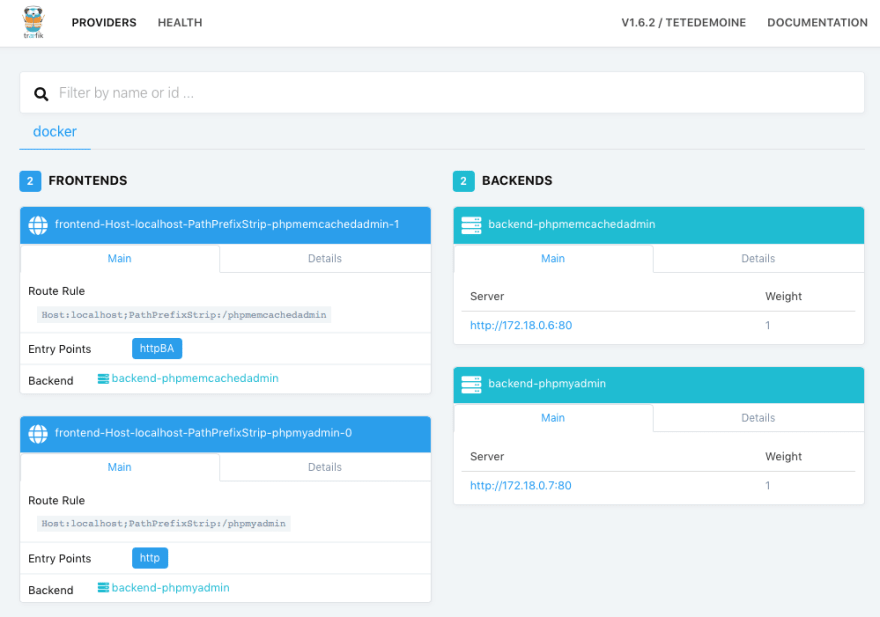 Please, do not hesitate to feedback thanks to issues if you felt the curiosity to try it.

After making sure that Traefik is running, I added this command to the Makefile:

The parameters are similar to the ones of the previous command with the following changes:

Running make traefik will now run a blog on http://localhost/ghost-local

First of all , I wanted to easily spawn Ghost blogs on my local machine,

The native documentation did not survive to my impatience, mainly because I knew it would be fast and smooth with Docker.

Secondly , I wanted to use the standard port (80 to start with), and route the blogs according to their path,

It was given for free with Traefik (and my "prod-stack") and I must admit I had a lot of fun playing with make. However, the result is still one for a developer, surely not ready for production (despite the name of the stack).

Nevertheless, the stack can provide HTTPs thanks to Let's Encrypt, a DB and some easy way to manage all this... I will dive into this in the next part to get something more robust... maybe

Tips for Productivity that I've Learned from Calypso

Top 5 Programming Skills Worth Learning in 2021