I can’t tell you how many videos and books and articles I’ve consumed on Python. At first I was driving myself even crazier because I was also doing the same for Swift code. But I stopped Swift and have been focusing on Python. Unsure if I’m making progress. Not really, no.  I’ll follow along with a video, do the code on my mac or iPad, and all is good. I’ll tweak it here and there and watch what happens. But generally it’s all not sinking in. I tried to take some killer Notion apps, like I see on YouTube. But I cannot access Notion the 8 hours I’m in an office, and the internet is sometimes too slow to access it on my MBP or iPad when I’m out of the Operations Center and its lame computer/network.  Earlier I had Googled for some beginner projects. I liked the one for choose your own adventure. I did a simple choice last week where it asked about pineapple and pizza. This time I started from scratch and started to move down a path.  One thing that is strange to me is that when I put in this:


I get a space after the name variable when I have it in a string.

That little space after my name and before the comma drives me nuts. But I’ll hold off on that detail. For now I’m pressing on. Let’s add some loops. I saw in one video how you can add the .lower() and it will take a YES or Yes and convert it all to a lowercase ‘yes’. Otherwise, I’d have to write some code checking for this in the loop. Neat trick. 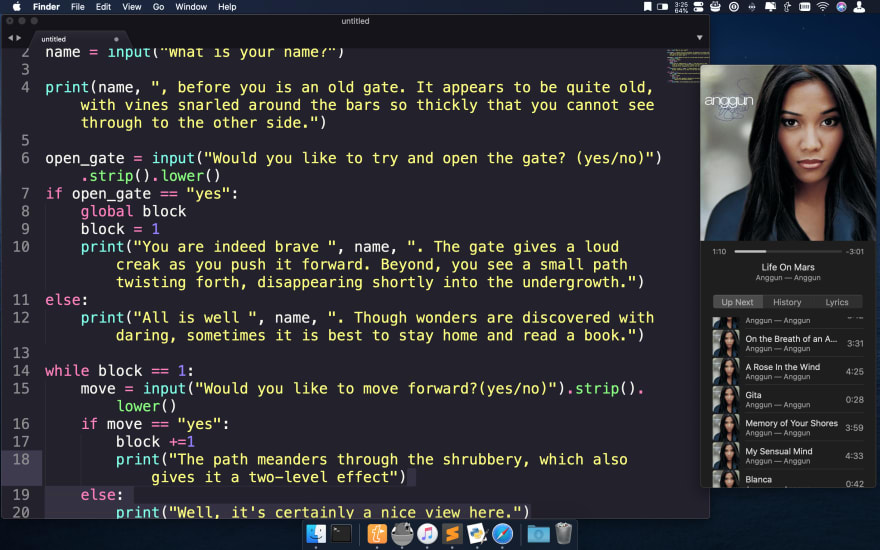 I’ll admit that I goofed when I made this at first. I was testing it with each step of the way, and before I wrote the else at the end, it was an infinite loop and kept printing the last sentence a bazillion times and crashed Safari. HA! I added the else and it fixed it.  I wanted a way to keep track of progress, and right off the top of my head I named it block and gave it a value of 1. I used a simple += 1 with it and figured that I could do some while loops for various values of the block. Because this was a local variable, I had to use the global keyword. Not that I’m smart here, but I didn’t know how else to increment the variable up one as a result of a choice, but also have that variable defined outside of the function. This seems to work just fine.

How I use TikTok as a developer

Algorithms and Data Structures are irrelevant

Eddie
I'm a noob. I was making HTML 1 with Notepad in 1995. Coming back to it and drinking from a firehose. Love it!
# Playing with Python lists
#python #beginners
What would good look like?
#webdev #leadership #noob #beginners

Once suspended, eddiecoyote will not be able to comment or publish posts until their suspension is removed.

Once unsuspended, eddiecoyote will be able to comment and publish posts again.

Once unpublished, all posts by eddiecoyote will become hidden and only accessible to themselves.

If eddiecoyote is not suspended, they can still re-publish their posts from their dashboard.

Once unpublished, this post will become invisible to the public and only accessible to Eddie.