With the use of containerized applications and microservices on the rise, there's never been a better time to become a Kubernetes expert.

Kubernetes is an open-source container orchestration system designed to automate application scaling and management. While Kubernetes is incredibly powerful, it's also notoriously difficult to learn.

Today, we'll get you one step closer to Kubernetes expertise with a walkthrough of the Deployment object, Kubernetes' vehicle for ReplicaSet management, and live system updates.

Brush up on top Kubernetes concepts

Become an in-demand Kubernetes expert with hands-on lessons and practice build right into your browser.

What is a Deployment in Kubernetes?

A Deployment is a resource object in Kubernetes that defines the desired state for your program.

Deployments are declarative, meaning that you don't dictate how to achieve the state. Instead, you declare your endpoint (called a "desired state") and allow the Deployment-controller to automatically reach that end goal in the most efficient way.

Once running, the Deployment compares the current program state to the desired state. If they do not match, the Deployment-controller automatically alters the state to match.

This automatic state maintenance is what gives Kubernetes it's beloved self-healing properties.

Desired states can include how many Pods are running, what type of Pods those are, what container images are available to the program, and the desired workload for each Pod.

If any aspect of the desired state is missing, the Deployment-controller will alter the program until they are met. 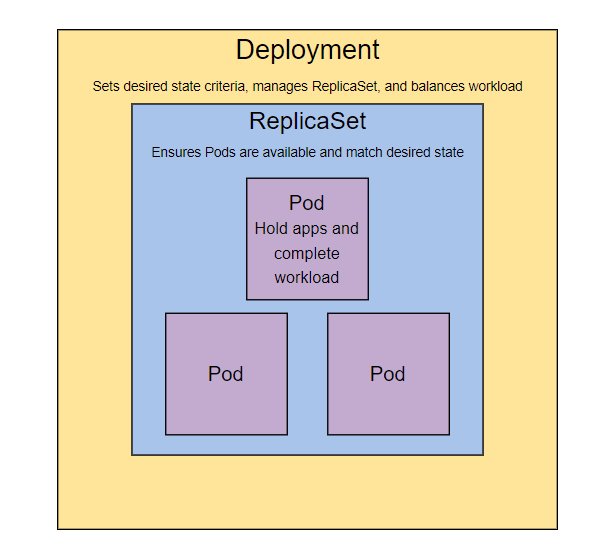 The main way Deployments maintain a program's desired state is through the use of ReplicaSets.

A ReplicaSet is a set of identical backup Pods maintained on the backend side to ensure a Pod is always available. If a user-facing Pod fails or becomes overworked, the Deployment allocates work to a Pod from the ReplicaSet to maintain responsiveness.

Each Deployment can only manage a single Pod template but can manage multiple Replica Pods from the same template.

The main advantage of Deployments is for automatically updating your Kubernetes program.

Without Deployments, you'd have to manually end all old Pods, start new Pod versions and run a check to see if there were any problems during Pod creation.

Deployments automate the whole updating process as you can simply update the Pod template or desired state. The Deployment will alter the program state in the background with actions like creating new Pods, allocating more resources, and so on, until the updated desired state is met.

You can even rollback updates to a previous version. Old ReplicaSets still exist with full Pod configurations but simply don't manage any Pods once a new ReplicaSet is made.

If you want to rollback to a previous version, you simply need to change the desired state to favor the old ReplicaSet and the Deployment will automatically revert.

Kubernetes offers Deployment strategies that allow you to update in a variety of ways depending on the needs of the system. The three most common are:

Let's take a deeper look at each of these three strategies!

The rolling update strategy is a gradual process that allows you to update your Kubernetes system with only a minor effect on performance and no downtime.

In this strategy, the Deployment selects a Pod with the old programming, deactivates it, and creates an updated Pod to replace it. The Deployment repeats this process until no outdated Pods remain.

The advantage of the rolling update strategy is that the update is applied Pod-by-Pod so the greater system can remain active.

There is a minor performance reduction during this update process because the system is consistently one active Pod short of the desired number of Pods. This is often much preferred to a full system deactivation.

The Deployment would create Pods and a ReplicaSet with the updated specifications and transfer workload one-by-one from the old Pods to the new Pods.

By the end, we'll have an entirely new set of Pods and ReplicaSet without any service downtime.

We'll use a YAML file declaration named deploy.yaml to create our Deployment.

Right at the very top, you specify the Kubernetes API version to use. Assuming that you’re using an up-to-date version of Kubernetes, Deployment objects are in the apps/v1 API group.

The .metadata section is where we give the Deployment a name and labels.

Finally, we'll apply this Deployment to our Kubernetes cluster with the command:

Don't stop with just Deployments. Stand out from your peers by mastering Kubernetes concepts from beginner to expert. Educative’s text-based courses are skimmable and loaded with hands-on practice.

The recreate update strategy is an all-or-nothing process that allows you to update all aspects of the system at once with a brief downtime period.

In this strategy, the Deployment selects all outdated Pods and deactivates them at once.

Once all old Pods are deactivated, the Deployment creates updated Pods for the entire system. The system is inoperable starting at the old Pod's deactivation and ending once the final updated Pod is created.

The recreate strategy is used for systems that cannot function in a partially updated state or if you would rather have downtime than provide users a lesser experience. The bigger the update, the more likely a rolling update will cause an error.

Therefore, recreate strategy is better for large updates and overhauls.

When you're considering the recreate strategy, ask yourself:

This implementation is very similar to the rolling update strategy.

As you can see, the only difference between the implementation of rolling update and recreate is on line 12 where we've replaced strategy.type: RollingUpdate to strategy.type: Recreate.

Just as last time, we'll deploy the Deployment via the command-line using:

The canary update strategy is a partial update process that allows you to test your new program version on a real userbase without a commitment to a full rollout. 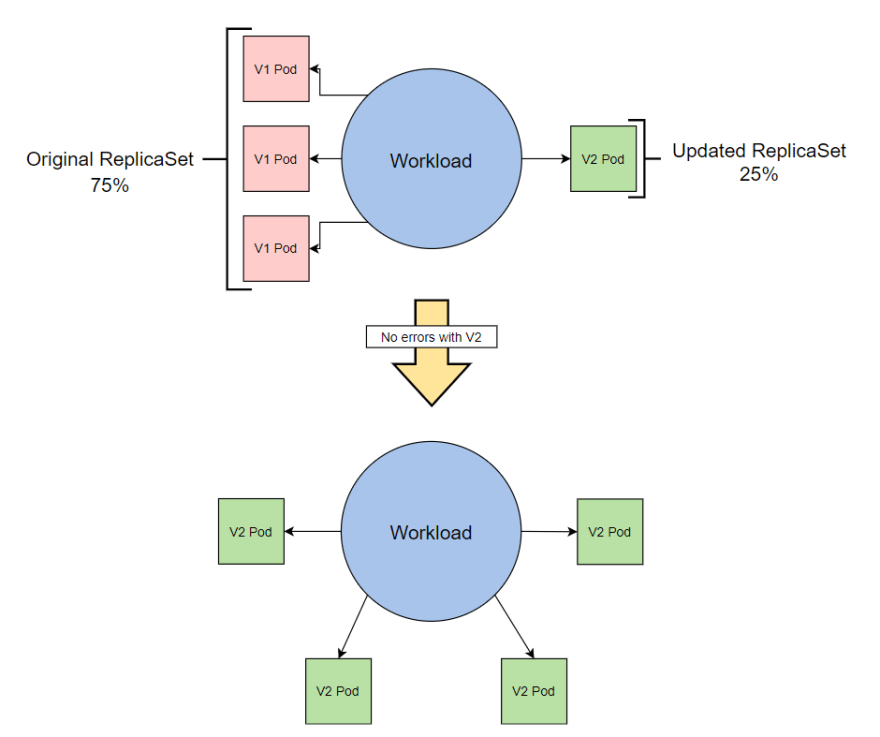 In this strategy, the Deployment creates a few new Pods while keeping most Pods on the previous version, usually at a 1:4 ratio.

Most users still use the previous version, but a small subset unknowingly uses the new version to act as testers.

If we don't detect any bugs from this subset, we can scale up the updated ReplicaSet to produce a full rollout.

If we do find a bug, we can easily rollback the few updated Pods until we've fixed the bug.

The advantage of the canary update strategy is it allows you to test a new version without the risk of a full system failure.

In the worst-case scenario, all users from the test subset experience critical errors while 75% or more of the user base continues without interruption.

The rollback process is also much quicker than the rolling update strategy because you only have to rollback a portion of the Pods rather than the entire system.

The downside is that the updated Pods will require a separate Deployment, which can be hard to manage at scale. Also, the canary strategy results in a slower rollout due to the waiting period after rollout to our initial subset and the completion of a full rollout.

When considering the canary strategy, ask yourself:

For this implementation, we'll need to create two Deployments in two YAML files.

Our first file, k8s-deployment.yaml, will be our outdated version that most of our Pods will run.

This will create 3 Pods of v1 with the app:helloworld label that our Kubernetes service is looking for. Our image for these Pods is educative/helloworld:1.0, meaning that these Pods will be created off the old Pod specifications.

This Deployment will evenly divide any workload among available Pods.

You will deploy this by entering this line into the command-line:

Instead, both versions are listed as rollingUpdates because updates within each version will be rollout while the overall system's strategy is canary.

For this Deployment, we only create a single Pod (line 6) to ensure most of our userbase still interacts with v1.

Both Deployments will balance the workload among all Pods which ensures only 25% of our workload will be on the updated Pod.

You can deploy this Deployment via the command-line using:

Then remove the canary Deployment with:

Our desired state will then be to have all Pods with v2 and workload will be balanced among the remaining 3 v2 Pods.

While that's it for our Deployment deep-dive, there are plenty of other core Kubernetes topics that you should learn about.

Continue your Kubernetes journey by learning about advanced topics like:

To help you with these and other Kubernetes topics, Educative has created the course Learn Kubernetes: A Deep Dive. This course starts with explanations and examples of all of Kubernetes core components and gradually transitions to advanced concepts with AWS, Azure, and GKE. By the end, you'll have interview-ready knowledge on everything Kubernetes has to offer.