When undertaking any project, it’s important to be familiar with the tools you’re using. Even if you're just getting started with web development, you've probably heard of three of the main tools for building interactive web applications: HTML, CSS, and JavaScript (JS). HTML contains the content of a site, CSS determines the layout, and JavaScript enables interactive functionality on web pages.

You can do a lot with JS on its own. But today, we’ll be taking a look at two popular resources that can make JS programming easier and help us develop interactive web applications: Angular and React. We'll briefly introduce JS, then compare these two tools at a high level.

If you want to build websites and web applications, you should learn JS. Practicing writing plain JavaScript is a good way to learn, and you can work on coding challenges to improve your skills. But once you know the basics, incorporating JavaScript libraries and frameworks opens up new possibilities.

This reusable code is also helpful for programming within a certain context. A JavaScript library is a collection of functions that can be invoked from JavaScript code. Different libraries will have specialized functions for performing certain tasks within a specific context. For instance, some JS libraries help you create graphics and visualizations, while others focus on the graphical user interface (GUI) or application testing. We can consider these libraries' functions as building blocks that you can slot into your code.

Angular, developed by Google, is a popular front-end JavaScript framework designed for creating Single Page Applications (SPAs). SPAs are web applications that allow user interaction without loading additional web pages. When you interact with an SPA, your input can change the user interface without requiring a new page to open. This single-page format is efficient because all of the page's content can be preloaded, including interactive elements. In the beginning, the complete web page is sent to the client-side by a server. Later, based on user interaction with the webpage, only a small relevant subset of the webpage is fetched from the server and updated to the client. This significantly reduces the load on the servers and makes the client application more interactive.

The Angular framework gives structure to code, acting as a template. In fact, Angular is built on TypeScript, a programming language designed to improve upon JavaScript by adding syntax rules that help with auto-completion, navigation, and error detection.

To understand what Angular can do, let’s look at some well-known websites built with the framework:

React, developed by Facebook, is a widely used front-end JavaScript library for designing interactive web-based applications. This library provides pre-written functions that help developers to build applications. React is based on JavaScript ES6+ and JSX, which stands for JavaScript XML and combines markup and JavaScript logic in one place. Since React has fewer built-in modules than a large framework like Angular, some tasks require external modules for functionality outside of the context of the library. With React's smaller size comes the benefit of being easier to learn.

Angular vs React: Which to choose for your app development?

Angular and React are both powerful JS resources with their own advantages and use cases. But which is better, and which should you use for your projects?

In terms of learning, React has a lower barrier to entry. Familiarity with HTML, CSS, and JavaScript should be sufficient to begin developing interactive web applications in React. Since Angular requires code to be written in TypeScript, this can prove to be a slight barrier to entry. In addition, Angular requires learning concepts like modules, directives, decorators, services, and templates before getting started.

Angular and React can both be used for mobile app development with additional frameworks: NativeScript for Angular, and React Native and Cordova for React.

For structure, TypeScript helps to eliminate errors and provides other features such as auto-completion, giving Angular an edge. And the tool Angular CLI can help with setting up a project promptly. However, coding within a full-fledged framework like Angular sacrifices some of the flexibility that a library such as React offers.

Angular and React use different approaches for data flow, and each has its strong points. Angular supports two-way (bidirectional) data binding, which synchronizes changes between an application's data model and its view (the HTML container where the application is displayed, called the DOM). This means that the model automatically changes when any change is made to the view and vice versa. This bidirectional data binding may be initially easier to work with, but it can get harder to manage as applications scale up.

On the other hand, React supports one-way (unidirectional) data binding. After you change the model state, the change will be rendered in the view. But changing something in the view does not automatically alter the model. When you augment React with Redux, a library used for state management, you get a unidirectional data flow that is more scalable, which helps with debugging larger projects. 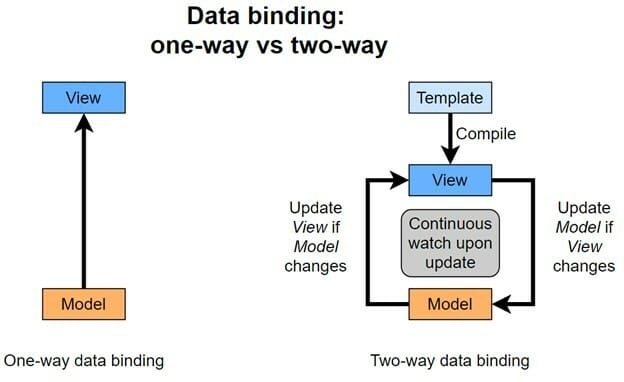 In terms of responsiveness, React has an edge because of its virtual DOM (Document Object Model).

What is the DOM? The DOM is an interface for web documents. It represents a web page in a tree-like data structure. Using the DOM, a program can easily change a document's structure, style, and content.

As noted, React uses a virtual DOM, whereas Angular uses a real DOM. A virtual DOM facilitates making minor data changes to one element of a web app without having to update an entire tree structure, which makes it more efficient. In contrast, in a real DOM, every change to an app’s backend requires refreshing the whole tree structure. This is considered slower and less effective. Thus, React is more responsive compared to Angular.

Angular is a larger framework, providing an entire ecosystem with more built-in functionality. You don’t need to add modules to an Angular app to handle things like data binding, routing, and API interactions, so developers often prefer it for larger corporate projects. React is a smaller library, making it optimal for smaller projects. A React app sometimes requires third-party modules or libraries for tasks not built into the library. These can include data binding, component-based routing, project generation, and dependency injection.

Summary of pros and cons

Let's briefly review and summarize the pros and cons of Angular and React.

In summary, React might be better for you if you are working on a smaller project because it is more accessible and can still perform many tasks with built-in functions and third-party modules. If you are looking for a more structured framework with massive built-in functionality or are working on a larger corporate project, Angular might be the best option for you. The optimal tool for you depends on what you’re trying to build.

We introduced a lot today, but there’s much more to learn about JS, Angular, and React. If you want to get started with React, our Become a React Developer learning path is a great place to get hands-on with building interactive web applications. Alternatively, if you’re interested in learning Angular, our TypeScript for Front-End Developers and Become an Angular JS Developer learning paths are great places to start.

Whether you decide to learn React or Angular, either will ultimately prove to be a useful tool for your programming arsenal.

Continue learning about Angular and React on Educative

Where do you see React and Angular in action? was this article helpful? Let us know in the comments below!