SOLID principles are a set of golden rules used by object-oriented developers since the early 2000s. They set the standard of how to program in OOP languages and now beyond into agile development and more. SOLID programs scale better, cost less time to work with, and can more easily respond to change. Employers will always prefer a candidate with a strong grasp of SOLID principles.

Today, we'll take a deep dive into each of these 5 principles and explain how they work using code, illustrations, and approachable descriptions.

Get hands-on practice with all the top OOP concepts.

What are SOLID principles?

SOLID is a mnemonic device for 5 design principles of object-oriented programs (OOP) that result in readable, adaptable, and scalable code. SOLID can be applied to any OOP program.

The 5 principles of SOLID are:

Now, SOLID has also been adopted in both agile development and adaptive software development.

The best way to understand SOLID is to break down each of the 5 principles and see how they look in code. So, let's do just that!

"A class should only have a single responsibility, that is, only changes to one part of the software's specification should be able to affect the specification of the class."

The single-responsibility principle (SRP) states that each class, module, or function in your program should only do one job. In other words, each should have full responsibility for a single functionality of the program. The class should contain only variables and methods relevant to its functionality.

Classes can work together to complete larger complex tasks, but each class must complete a function from start to finish before it passes the output to another class.

Therefore, we could change all but one class in the program without breaking the original class.

SRP makes it easy to follow another well-respected principle of OOP, encapsulation. It is easy to hide data from the user when all data and methods for a job are within the same single-responsibility class.

If you add a getter and setter method to a single-responsibility class, the class meets all criteria of an encapsulated class.

The benefit of programs that follow SRP is that you can change the behavior of a function by editing the single class responsible for it. Also, if a single functionality breaks, you know where the bug will be in the code and can trust that only that class will break.

This factor also helps with readability because you only have to read a class until you determine its functionality.

Let's look at an example of how SRP can be applied to make our RegisterUser class more readable.

The program above does not follow SRP because RegisterUser does three different jobs: register a user, connect to the database, and send an email.

This type of class would cause confusion in larger projects, as it is unexpected to have email generation in the same class as the registration.

There are also many things that could cause this code to change like if we make a switch in a database schema or if we adopt a new email API to send emails.

Instead, we need to split the class into three specific classes that each accomplish a single job. Here's what our same class would look like with all other jobs refactored to separate classes:

This achieves the SRP because RegisterUser only registers a user and the only reason it would change is if more username restrictions are added. All other behavior is maintained in the program but is now achieved with calls to userRepository and emailService.

Modifying OldClass instead of extending

"Software entities ... should be open for extension, but closed for modification."

This statement, at first, seems like a contradiction since it asks you to program entities (class/function/module) to be both open and closed. The open-closed principle (OCP) calls for entities that can be widely adapted but also remain unchanged. This leads us to create duplicate entities with specialized behavior through polymorphism.

Through polymorphism, we can extend our parent entity to suit the needs of the child entity while leaving the parent intact.

Our parent entity will serve as an abstract base class that can be reused with added specializations through inheritance. However, the original entity is locked to allow the program to be both open and closed.

The advantage of OCP is that it minimizes program risk when you add new uses for an entity. Instead of reworking the base class to fit a work-in-progress feature, you create a derived class separate from the classes currently present throughout the program.

We can then work on this unique derived class, confident that any changes we make to it will not affect the parent or any other derived class.

OCP implementations often rely on polymorphism and abstraction to code behavior at a class level rather than hard-coding for certain situations.
Let's see how we can correct an area calculator program to follow OSP:

This program does not follow OSP because Area() is not open to extension and can only ever handle Rectangle and Circle shapes. If we want to add support for Triangle, we'd have to modify the method, so it is not closed to modification.

We can achieve OSP by adding an abstract class Shape that all types of shapes inherit.

Further, nothing in the program modifies the original shape, and it will not need to be modified in the future. As a result, the program now achieves the OCP principle.

Keep learning about OOP in C

Don't stop with just SOLID. Master all the OOP fundamentals in C#.

Educative's interactive, text-based courses provide lasting learning in the skills every C# interviewer is looking for.

LSP: seamless substitution for the B class in existing code

"Objects in a program should be replaceable with instances of their subtypes without altering the correctness of that program."

The Liskov substitution principle (LSP) is a specific definition of a subtyping relation created by Barbara Liskov and Jeannette Wing. The principle says that any class must be directly replaceable by any of its subclasses without error.

In other words, each subclass must maintain all behavior from the base class along with any new behaviors unique to the subclass. The child class must be able to process all the same requests and complete all the same tasks as its parent class.

In practice, programmers tend to develop classes based on behavior and grow behavioral capabilities as the class becomes more specific. The advantage of LSP is that it speeds up the development of new subclasses as all subclasses of the same type share a consistent use.

Some critics argue that this principle is not consistent with all program types since abstract supertypes that have no implementation cannot be replaced by subclasses that are designed for implementation.

Most implementations of LSP involve polymorphism to create class-specific behavior for the same calls. To demonstrate the LSP principle, let's see how we can change a fruit categorization program to implement LSP.

This does not follow LSP because the Orange class could not replace the Apple class without altering the program output. The GetColor() method is overridden by the Orange class and therefore would return that an apple is orange.

To change this, we'll add an abstract class for Fruit that both Apple and Orange will implement.

Now, any subtype (Apple or Orange) of the Fruit class can be replaced with the other subtype without error thanks to the class-specific behavior of GetColor(). As a result, this program now achieves the LSP principle. 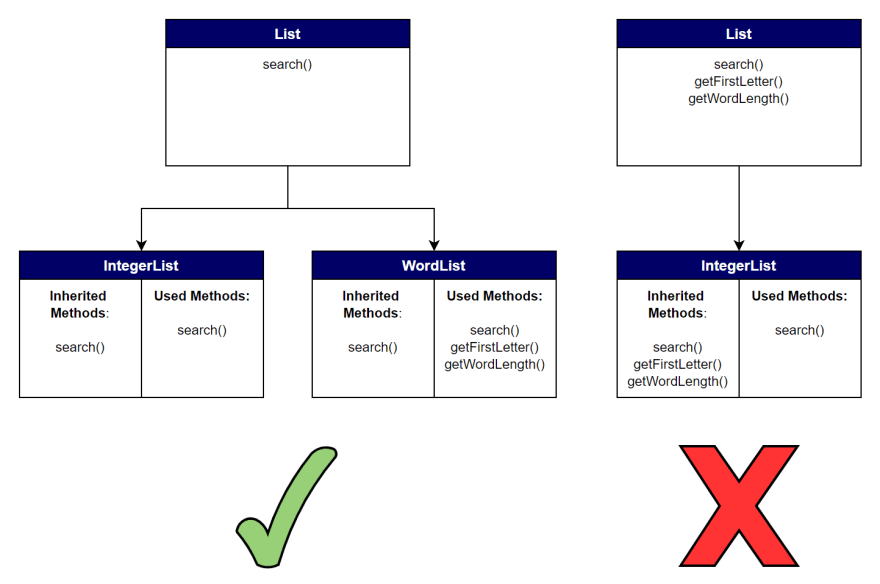 "Many client-specific interfaces are better than one general-purpose interface."

The interface segregation principle (ISP) requires that classes only be able to perform behaviors that are useful to achieve its end functionality. In other words, classes do not include behaviors they do not use.

This relates to our first SOLID principle in that together these two principles strip a class of all variables, methods, or behaviors that do not directly contribute to their role. Methods must contribute to the end goal in their entirety.

Any unused part of the method should be removed or split into a separate method.

The advantage of ISP is that it splits large methods into smaller, more specific methods. This makes the program easier to debug for three reasons:

Neither of these methods advance the goal of these classes. Instead, they are implemented because they are derived classes of the IWorker interface.

Here's how we could refactor the program to follow the ISP principle:

In this version, we've split the general interface IWorker into one base interface, IBaseWorker, and two child interfaces IFullTimeWorkerSalary and IContractWorkerSalary.

The general interface contains methods that all workers share. The child interfaces split up methods by worker type, FullTime with a salary or Contract that gets paid hourly.

Now, our classes can implement the interface for that type of worker to access all methods and properties in the base class and the worker-specific interface.

The end classes now only contain methods and properties that further their goal and thus achieve the ISP principle. 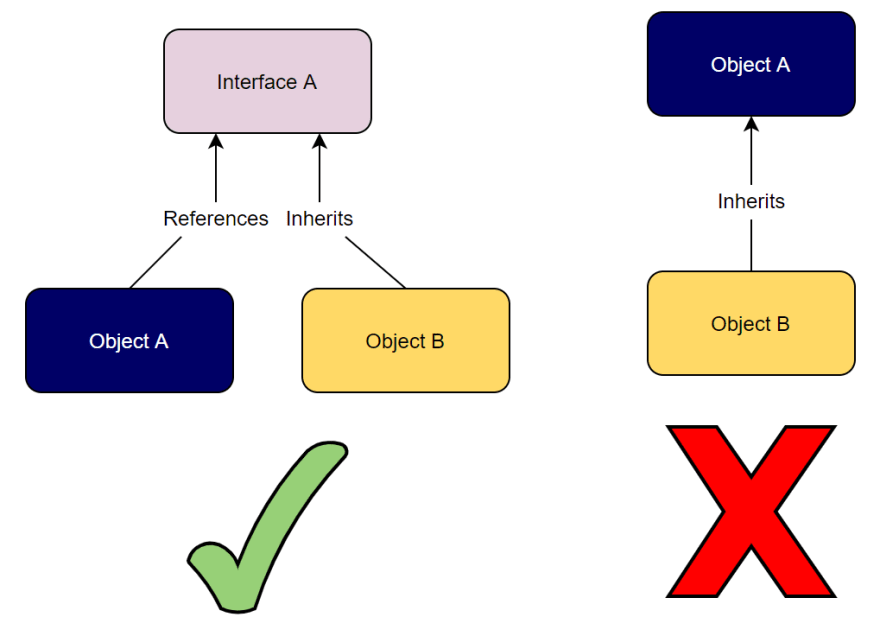 DIP: Changes to Objects A and B will not affect the other

"One should depend upon abstractions, [not] concretions."

The advantage of this part of DIP is that decoupled programs require less work to change. Webs of dependencies across your program mean that a single change can affect many separate parts.

If you minimize dependencies, changes will be more localized and require less work to find all affected components.

This process is known as refactoring.

This means you won’t have to hard-code the interface to work solely with the current details (implementation). This keeps our code loosely coupled and allows us the flexibility to refactor our implementations later.

First, let's create an interface with the getCustomerName() method. This will face our users.

Now, we'll implement details that will depend on the ICustomerDataAccess interface. Doing so achieves the second part of the DIP principle.

Here's the full program in both code and visual chart: 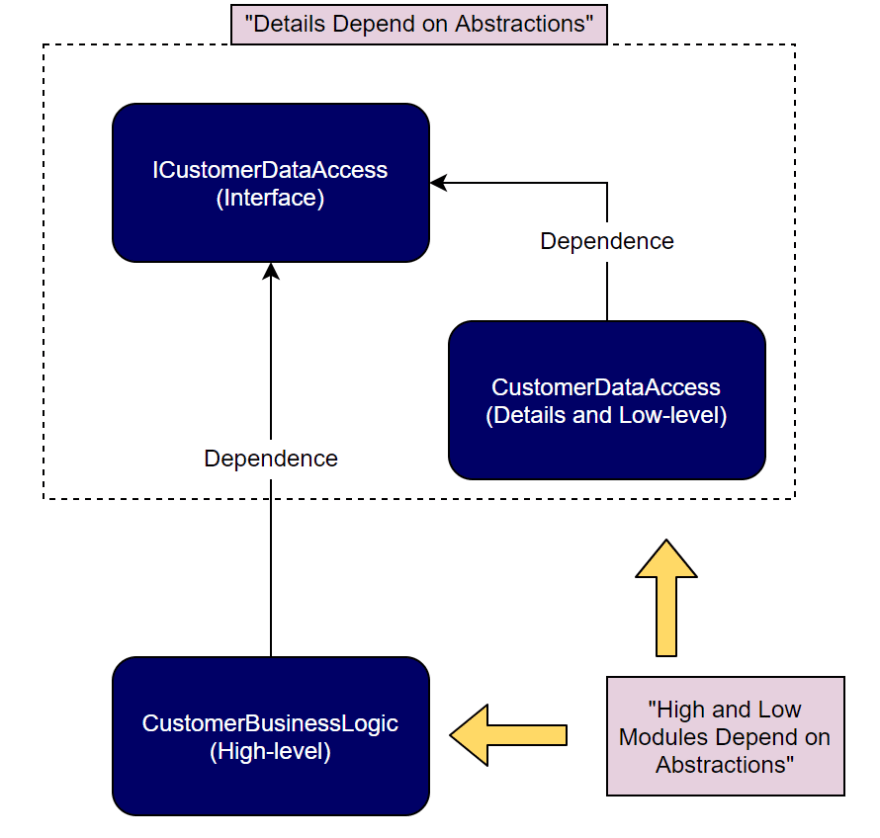 The SOLID principles are an excellent way to improve your code and make modifications easier. It can be difficult to achieve them all in a single program if you're just starting out, so first focus on one at a time. Eventually, you'll write SOLID programs by habit.

However, SOLID is just one step toward becoming an ace object-oriented developer. Next, you should get comfortable using the four components of OOP:

Educative's Learn Object-Oriented Programming in C# course walks through each of these components in-depth with interactive projects to help you learn. You'll learn how and why to implement these OOP concepts in your own code. By the end, you'll have a strong understanding of the most advanced OOP concepts and be able to apply them in C#.

How I get 2K daily traffic with Web Stories?