This article was written by Aaron Xie and was originally published at Educative.io.

So, you know JavaScript. And you know frontend framework like React. You’re off to the races, building your amazing single-page-application and expanding it.

Over time, your React application becomes more complex, with more app components, and more data going in and out of it. Now you’re running into issues, and managing multiple simultaneous processes is turning into a headache. How do you keep it all in line?

The answer is to use Redux. Before we dive in, let's review what you'll be learning about today:

What is state management?

State, a term from React, is an object that holds data contained within a component. It determines how a component behaves and renders. State is a central component to making dynamic pages through conditional rendering.

An easy way to grasp this concept is to understand the user interface as a function of state, meaning that a developer can change the appearance of the web application depending upon the data held by the state. Imagine you are building a to-do-list application with React.

You have a todo-item component, and you want to program the component so that when a user clicks the item, it gets crossed out. You can have a state variable called isFinished and have its value be either True or False. Depending upon the value of isFinished, the todo-item can be programmed to be crossed out.

Want to read more about state and React? Check out our What is React? article.

Because state can be messy to manage, especially when there are a number of dynamic components, utilizing a state management system will help your future debugging.

What is Redux, and why do we need it?

Redux is a lightweight state management tool for JavaScript applications, released in 2015 and created by Dan Abramov and Andrew Clark.

Redux is the most popular state management solution, helping you write apps that behave in the same way, are easy to test, and can run the same in different environments (client, server, native). One of the key ways Redux does this is by making use of a redux store, such that the entire application is handled by one state object.

According to its official documentation, Redux was founded on three core principles:

With the entire state of your application centralized in one location, each component has direct access to the state (at least without sending props to child components, or callback functions to parent components).

Educative's Redux course teaches you how to use Redux with React and javascript so that you can develop powerful web applications.

With the hooks functionality and Context API incorporated into React, some have questioned whether Redux is still necessary to build a larger react application. The answer is yes. Though you may not need it for a simple React application, you will need it when your applications become more complex. The Context API is not a replacement for Redux.

Problems with the Context API arise when your app expands. In a larger application, the order in which data moves can be important. With Redux, you can keep a record of the changes in your state and time travel back to these changes. Furthermore, Redux is more efficient than React stand-alone because Context often forces re-renders.

Furthermore, while Context API has made it easier to pass data between components without using Redux, it's not a state manager, which means you're missing out on a lot of other features. Redux offers tools that make it incredibly easy for you to debug, test, and track your state.

To be sure, Redux provides scalability, easy debugging, and middlewares. It's also important to note that Context and Redux cannot be compared in the same category, as Redux is decoupled from the UI layer and is a state management system, while Context is not.

Benefits and limitations of Redux

While Redux is something that every developer should consider utilizing when developing their application, it's not for everyone. Setting up the Redux architecture for your application can be a difficult and seemingly unnecessary process when you're working with a small application. It may be unnecessary overhead to use Redux unless you're scaling a large application.

More interested in Context API, hooks, and React? Check out our React Tracked course to dive into advanced concepts of React.

Naturally, using an external solution for state management means being familiar with a few rules in the development process. Redux introduces actions, action creators, reducers, and stores. Ultimately, these concepts are used to create a simple state management architecture. 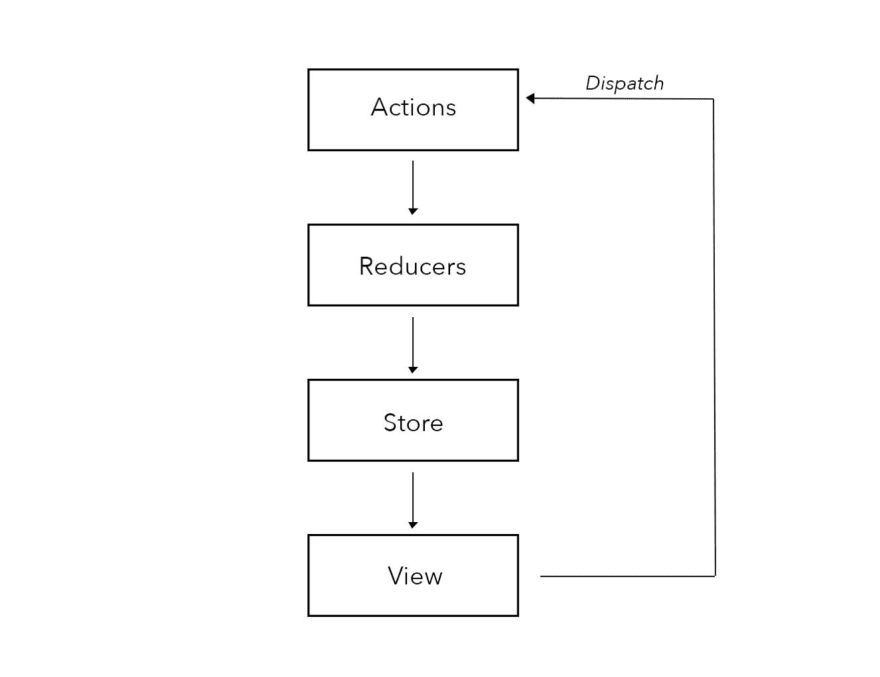 Action is static information about the event that initiates a state change. When you update your state with Redux, you always start with an action. Actions are in the form of Javascript objects, containing a type and an optional payload.

These are simple functions that help you create actions. They are functions that return action objects, and then, the returned object is sent to various reducers in the application.

A reducer is a pure function that takes care of inputting changes to its state by returning a new state. The reducer will take in the previous state and action as parameters and return the application state.
As your app grows, your single reducer will be split off into smaller reducers that manage certain parts of the state tree.

The Redux store is the application state stored as objects. Whenever the store is updated, it will update the React components subscribed to it. You will have to create stores with Redux. The store has the responsibility of storing, reading, and updating state.

Getting started with Redux

Although Redux is used with other JavaScript libraries like Angular or Vue.js, it’s most commonly used for React projects. Let's take a look at a basic implementation of React-Redux.

Now, you might feel ready to begin testing the waters with Redux, but don't get ahead of yourself. Redux has a pretty big learning curve initially. It’s tougher to pick up on your own. So, here are some of our recommended resources to start your learning!