I really like "Implement something from scratch" type of articles, for example:

It is a good way to learn how things work, and to unveil magic behind the black box of a library.

I plan to write a small Effector ☄️-like library called E~wee~ctor. This will be an educational-only purpose project.

Good and simple place to start is a "counter" example from Effector website:

Thus we need to implement two main entities – event and store – and some of their methods.

I will not dive deeply into Effector right now, if you want to do it, check this article out. But here are some highlights from Effector's architecture:

Here is the logical relationship graph for the code above:

And here is what Effector creates, structural graph of nodes: 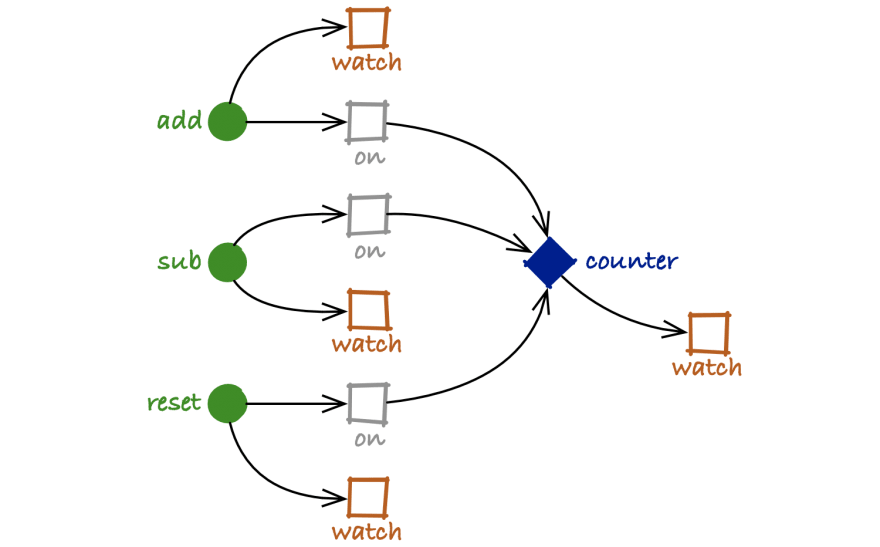 Let's start with the core thing of a graph – a node. A node should contain links to the next nodes – edges of a graph, and sequence of steps – where we will describe logic.

createNode factory function is very simple, it just creates a node object and nothing else. We could even go without it, and describe nodes in-place, like plain objects. But factory function gives us two benefits:

Next thing we need is steps. There are six types of steps in Effector, but we will start from a single one. And we will not even create factory for it :) Let's just use function as a step. So out nodes will contain a sequence of functions to execute.

Event is the simplest Effector unit. It is a function, attached to a graph node. The only purpose of an event as a high-level entity is to place input data into the node and to start computation cycle.

createEvent factory creates function and attaches graph node into its graphite field. Created event-function accepts input data and executes function launch. This launch function will start a computation cycle, and we will describe it later, when we write a kernel.

As you can see, a node, attached to an event, doesn't have any next nodes, nor steps.

Watch is an auxiliary node, which runs side-effect. In case of our counter example this side-effect is console.log.

As we decided to use simple functions as steps (for now) – we will just use given side-effect function as a step for watch node.

And after creating watch node, we put this node to the next array for the given unit.

And now let's add .watch method to our event:

So we will be able to watch events:

And here we go :) The kernel. It is not that frightening as it sounds, really.
There are two main parts of the kernel: queues and computation cycle.

Effector utilises five queues. We will start with single one:

Computation cycle traverses graph and executes each step from each node:

In simple words function exec can be described as following steps:

One more thing – we need function launch for our events:

launch function just puts node and value into the queue, and starts computation cycle. Thats it.

And last, but not least – a store.

createStore factory creates object, and attaches graph node into its graphite field, just like with an event. But store node has one step – it saves input data into an enclosured variable currentState.

We also need to implement few store's methods, like .on, .reset and .watch. Let's start with last one:

.watch method for store is a bit different, than for an event – first time it is called it executes given function with current state, and then creates watch node.

.on method accepts an event (or any unit) and reducer function. Like .watch method it creates a new on node, with one step, where reducer is called. And places this new node before store node in the graph, so new value from reducer will be saved in the store node. Also it puts this new node to the next array for the given event (or unit). 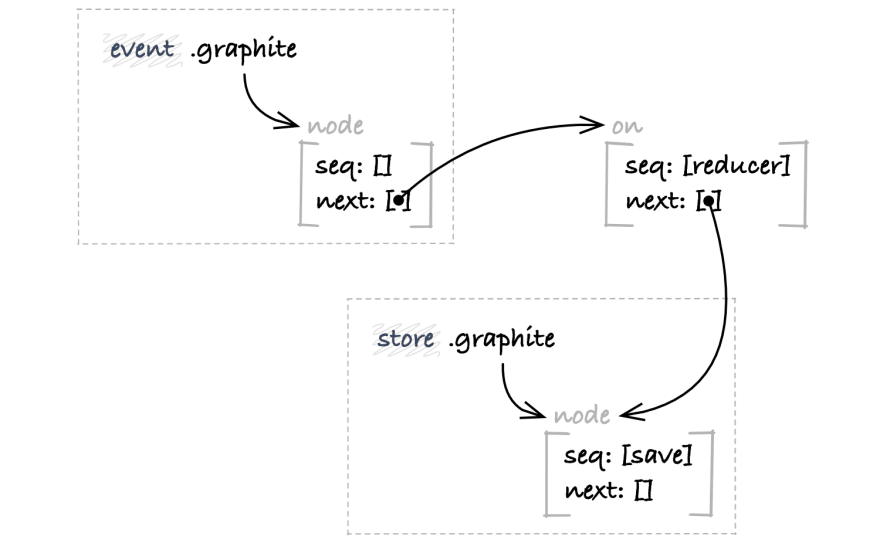 And we've done our first step in this journey. If we combine all these pieces together, we will get minimal working "eweector", which could run counter example. And what is more important – it follows Effector's architecture!

In next chapters we will grow up our infant. I'll try to cover all Effector's API in reasonable limits, so stay tuned ;)

I've created project on GitHub to help you follow the source code.
All code, described in this chapter, is committed in this commit.

Hi! I am the author of robust state management and a business logic system called effector. I am developing it on a full-time basis. I live and pay for the effector backend from the payments on Patreon.

Once suspended, effector will not be able to comment or publish posts until their suspension is removed.

Once unsuspended, effector will be able to comment and publish posts again.

Once unpublished, all posts by effector will become hidden and only accessible to themselves.

If effector is not suspended, they can still re-publish their posts from their dashboard.

Once unpublished, this post will become invisible to the public and only accessible to Victor Didenko.

Thanks for keeping DEV Community safe. Here is what you can do to flag effector:

Unflagging effector will restore default visibility to their posts.