With my salary, we had enough to cover the monthly expenses, but my wife decided to start working so I could study. Pregnant and with our son…she found a kinder garden where she could work and also take our son.

Hi there 👋, after the first two posts of VueJs, The Series 🚀, I wanted to post something about me and my journey into tech.

To give you some context, I'm Eliahu, you can find me on Twitter @eligarlo, I'm from Spain and currently based in Israel. I speak 3 languages (Spanish, English, Hebrew) but my reading and writing skills in Hebrew are just OK (with the help of Google Translate😅). I'm 33 years old, married and father of two wonderful kids. I never had a blog before, this is literally the third post I've ever written in my life! I invite you to keep reading and enjoy my journey.

I lived in Spain until the age of 24. I quit studying when I was 18, at that time I thought that studying wasn't for me 😂. I started working as a carpenter. I always loved to build things, to see that, taking parts that apparently don't belong together, I could build something useful. Unfortunately this job did not endure much and after trying as a salesman, the 2008 crisis hit and I decided to leave Spain. 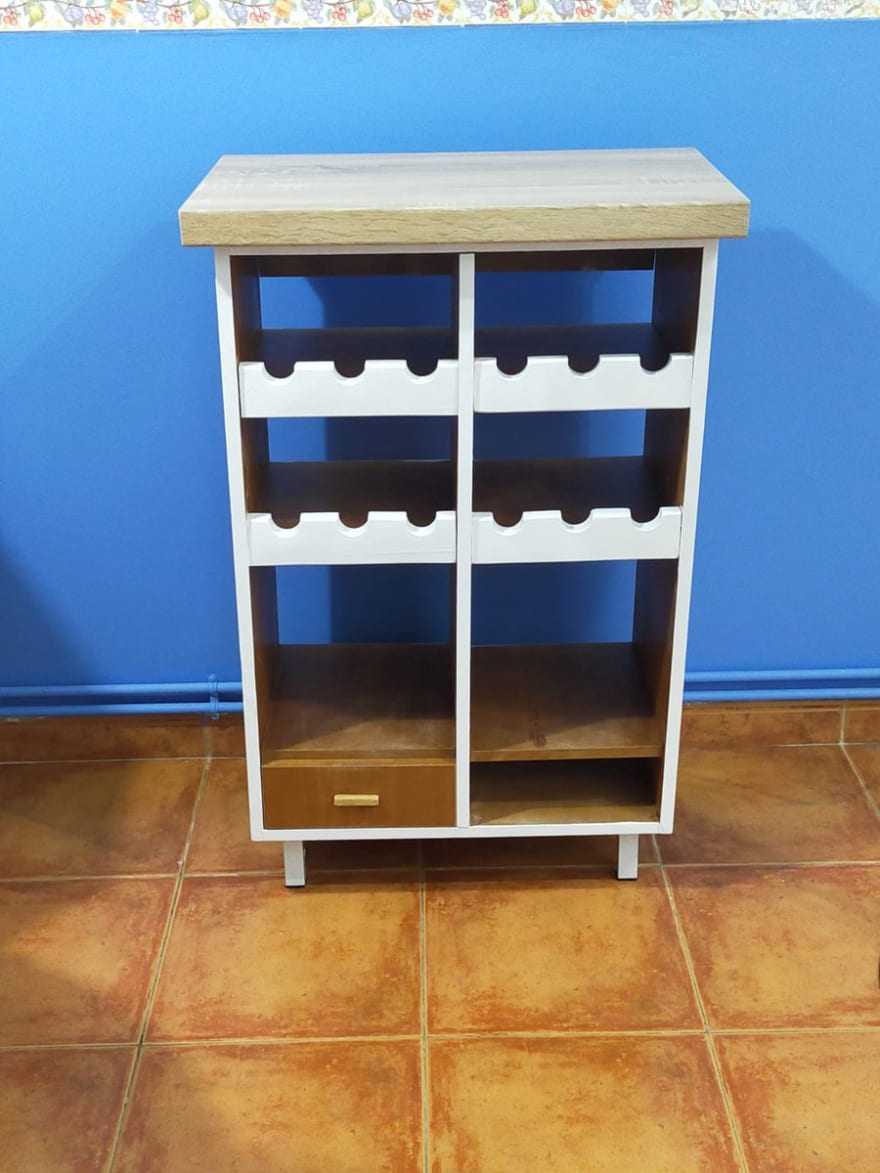 Years ago I worked as a carpenter.

Yesterday my mom sent me a pic of a wine caveat I built for my parents.

I was so proud of myself to see that job done and how much they love it.😊

It's like finishing a project, u can always look back and say "I BUILT THAT" 💪

In Spain you have everything, beach, mountains, hot and cold weather, you name it. It's not very common to live in another country or to travel to different countries as a Spaniard. It is not in the culture (probably for my parent's friends I'll still be the one that lives in Israel).

So, I left Spain and took a flight to Bristol, UK and then a bus to Wells, Somerset. I was like this guy moving from the town to the city. Even though Wells is known to be the smallest city in England, my thoughts were that the world was bigger than what I had imagine.

My English was like Manuel's from Fawlty Towers, but I had a contract with a local hotel to start working as a waiter in their restaurant. As my English improved, I started getting more tasks to do, at some point I ended up covering some shifts as a receptionist.

I met awesome people from different countries, staff and customers. This helped me to better understand other cultures and not feel like that boy coming from the town. I even got to do an Interrail 🚂 trip from Amsterdam to Vienna, through Berlin, Warsaw, Krakow, and Prague.

After a year and a half, I was ready to move on.

I always wanted to live in Israel and I arrived in 2012 full of energy. Originally, I thought speaking English was gonna be good enough but unfortunately that wasn’t the case.

The First two years were good, I really enjoyed myself but after that I got my nationality and had to start working (like a real job👔).

In 2015, I went to one of those agencies that find you a place to work. Due to my lack on the local language, the only position I could find was cleaning in a school. It was not the best job in the world but at least I started working at 10am so I could go to sleep late 🦉. That same year I met my wife and got married, she is also Spaniard but from a different city. When school closed for summer vacation, I decided I had to find something else.

During that summer I worked in a cafe, and although I learned some Hebrew there, the salary wasn't great, so I went to the next opportunity. I took a job as animal caretaker in a laboratory of the Hebrew University, Jerusalem.

The job there was basically taking care of the animals (mice🐭, rats🐀 and rabbits 🐇), feed them and clean their cages.

In 2016, whilst working at the lab, my first son was born. I worked there for over a year and then started having problems with my back due to the workload.

Next stop was ticket controller on the light rail 🚆. In this job I picked up Hebrew much quicker as I was always out on the street and talking with lots of people.

In January 2018, I realized I needed a BIG CHANGE. My wife was expecting again (our daughter).

I was working shifts on the light rail, but for years I had had the fear that I wouldn’t be enough, enough to provide for my growing family and enough for myself.

I'm a quick learner, I learned English and Hebrew on the fly, no lessons. I started thinking I could do better, I needed to do better.

With the above said, let's talk some code.

I have this friend (with time he became my mentor) that told me that he was a web developer, to be honest I always liked nice effects on websites and things like that, but never thought about what was behind it. I started playing around with the basics for a couple of months and then decided I needed a place to go to boost my learning (my respects for people I see nowadays learning online, alone).

So, I went to the John Bryce academy asking about a course in web development and they offered me a Full Stack Course of one year. I didn't have the money, I didn't have the time, but I had the motivation and a wonderful wife! 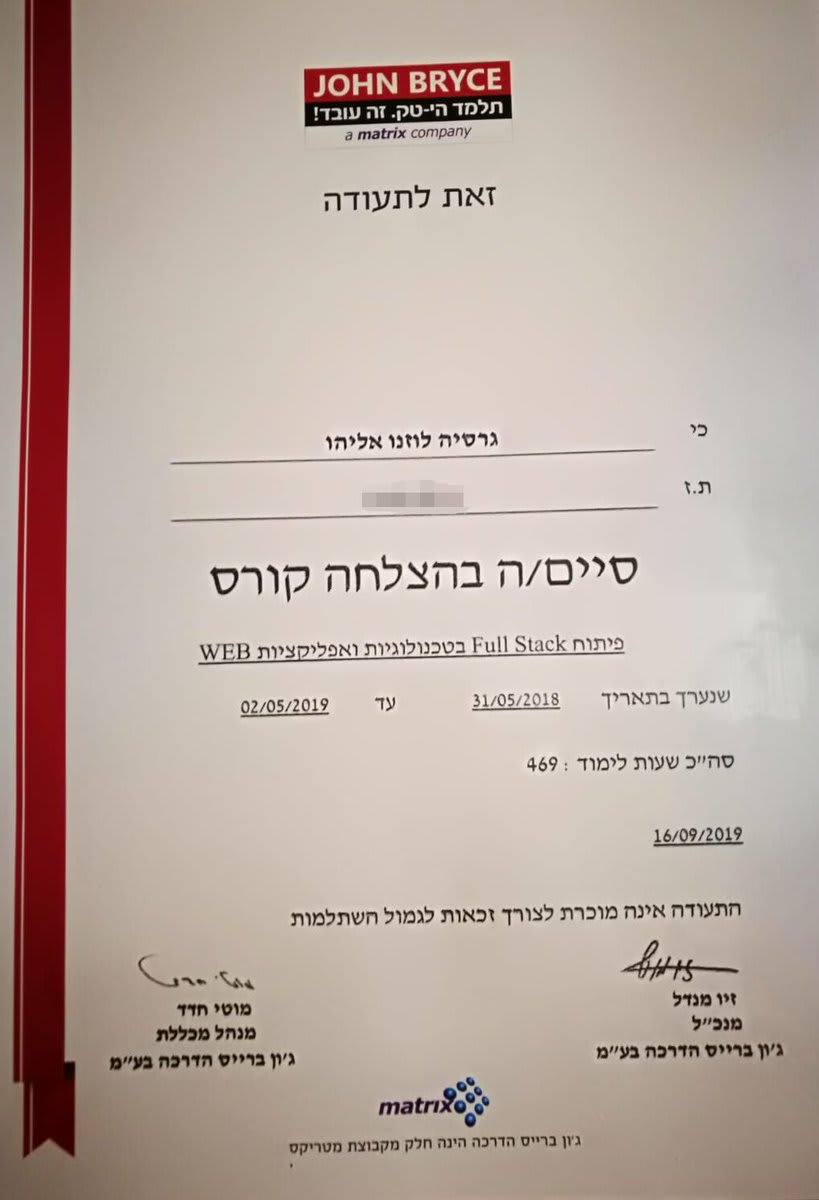 I've got my diploma as #fullstack #developer!!

It has been a very difficult year were I had to be working , studying and attending classes. Of course it is less painful when you are doing what you love.

I want to thank God for putting in my life such a wonderful woman.
She deserves half of this diploma. Without her, taking care of two kids (at all meanings), the house, shopping, etc, I just wouldn't have done it.
Thanks preciosa for your support and for always been there! Shirel

With my salary, we had enough to cover the monthly expenses but my wife decided to start working so I could study. Pregnant and with our son (he was staying home with her), she found a kinder garden where she could work and also take our son. Their day was like leaving home before 7am and back home at almost 6pm.

In May 2018, after going to a taster session to find out if I could understand the language (Hebrew), I decided I would go for it. My days were tough, my shifts at work were from 7am to 5pm, and I had lessons twice a week from 6pm until 10pm. It got better when I started getting homework and semester projects 😂. I didn't have an office at home, just my laptop and no fancy setup. I remember putting a desk in our room, and the back of my chair was against the bed and my knees against the desk.

We were like zombies, and we barely saw each other part from weekends, but I was getting pretty good grades and I realized after 30 years, I had finally found my passion. I could (and still do) talk about code all day, learn new stuff and enjoy everything I am learning.

About half a year after I started learning, my friend (mentioned above) talked to me about an opening position they had at his company. His boss called me, we talked, I was so nervous I talked too much😅, but they hired me. No exam, nothing, just the trust of this friend that I could do the job. To this day, that is coming back to me as impostor syndrome. I see many people struggling to get that first job, and for me it was just a quick phone call.

So, I signed a contract with them for a couple of months, that's what the original offer was. I learned things I wouldn't learn in the course. I learned new technologies, how to work with a team, build web pages from simple mock-ups given from the designer and much much more!

At the end of the contract, due to company policy, I had to leave, BUT the boss saw that I was delivering and growing very fast, so he hired me as a contractor and I was able to work there for the whole year.

I was working up to 4 days a week, sometimes just 3 (which it was fine during the time I was still studying), but my contract was renewed every two months. I was very happy working there but I decided to start looking for a full time job.

I was working up to 4 days days a week, sometimes just 3 (which it was fine during the time I was still studying), but my contract was renewed every two months. Even that I was very happy working there, I starting looking for a full time job.

I started simple, passing my CV to friends. I'm a low profile (or that I thought). One came back with an interview over the phone, where I had to record myself while answering questions on the phone. I passed that first step of the interview and went to a face to face interview with the hiring manager. I've read many tips on what to do before an interview, the one I give you is, think about the interview as if you were chatting with a friend, this gave me confidence, thinking that the person in front of me was not judging me but wanted to know me better.

I passed this step too and I was given an exam, a home assignment and code review after I finished it. After the code review I got to the final step! Passed the HR interview, then got an offer which I accepted 🍾🥂. This was December 2019.

Even though I am working full time I continue learning and building my side projects. I have started to become more active in the Twitter tech community and started blogging as well.

Thank you for reading, if you have any questions or would like to know me better, you can always find me on Twitter @eligarlo.

Once suspended, eligarlo will not be able to comment or publish posts until their suspension is removed.

Once unsuspended, eligarlo will be able to comment and publish posts again.

Once unpublished, all posts by eligarlo will become hidden and only accessible to themselves.

If eligarlo is not suspended, they can still re-publish their posts from their dashboard.

Once unpublished, this post will become invisible to the public and only accessible to Eliahu Garcia Lozano.

Thanks for keeping DEV Community 👩‍💻👨‍💻 safe. Here is what you can do to flag eligarlo:

Unflagging eligarlo will restore default visibility to their posts.